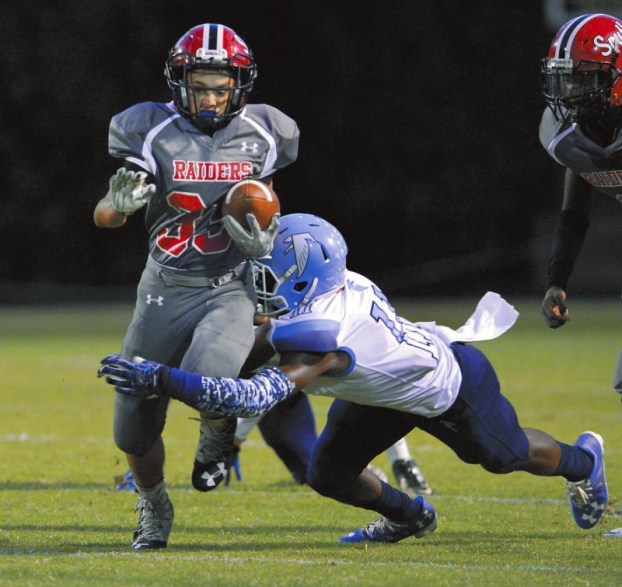 Wayne Hinshaw files photos/for the Salisbury Post North Rowan receiver Alonzo Sirleaf and West Rowan defensive back Deyquan Byrd are The Post’s Friday Night Heroes as their teams are in the third round of the state playoffs.Byrd is shown bringing down South Rowan’s Cameron Hurd.

MOUNT ULLA — West Rowan intercepted four more passes in Friday’s 35-7 win against Crest.
That’s 25 picks this season, the most in a season by the Falcons in this century and probably a school record because footballs get tossed around a whole lot more now than they did in the old days.
“That’s a great number of interceptions for a defense in 13 games,” West coach Joe Nixon said. “We talk a lot about creating turnovers. Our guys are doing it.”
Senior cornerback Deyquan Byrd has been the driving force in West’s interception spree. When Crest tried to attack him deep, Byrd skied and came down with his eighth pick of the season.
Eight interceptions are the most by a Rowan County player in a season since current West assistant coach Josh Avery accounted for 10 in 2007. Avery is tied for the school record with Zeb Link, who picked off 10 as a free safety in 2004.
The county record for more than two decades has been the 13 picks by the late Adrian Davis for North Rowan in 1994.
West’s pass defense always looks the same with corners Paris Hillie and Byrd in constant press mode against the receiver lined up across from them, but the Falcons, who use a 4-2-5 base, are proficient at disguising coverages.
It’s usually Cover 3 with free safety Malcolm Ingram (six picks), Byrd and Hillie (five picks) each taking deep responsibility for a third of the field, but the Falcons also will sneak in some Cover 4, with another man dropping back in a safety role in the middle of the field.
“Crest had very good receivers,” Byrd said. “But we all did our jobs. We got up in the faces of their receivers and our defensive line got to their quarterback. He had to throw quick and he threw some jump-balls. And we look at jump-balls as ours.”
Crest’s top receiver, Tyshun Odom, had a monster night with 272 receiving yards and four touchdowns when Crest beat East Rowan, 60-40, the previous week. But the Falcons held him to two catches and no big plays.
“My reaction when I saw his stats against East was that, well, we’re West Rowan and we’re not going to let something like that happen,” Byrd said. “I believed in us, even though some doubted us.”
Byrd has been a regular since he was a sophomore.
He emerged as a standout as a junior. Teams threw at him 27 times, but the rewards were slim — six completions and zero touchdowns. He was All-South Piedmont Conference and second team All-Rowan County.
The biggest difference between his junior and senior seasons is all those interceptions. He had only one pick last season, and it came on opening night.
“I’d credit the hard work and the preparation I put in each week for my success this year,” Byrd said. “I do everything I can, whatever it takes, because I don’t want to let my teammates down. The guys on this team — we do it for each other.”
Byrd has gambled more as a senior and has been more aggressive assaulting the running game. He’s been burned for a few touchdowns, but coaches around the South Piedmont Conference sing his praises.
Hickory Ridge fooled Byrd for a touchdown, but coach Jason Seidel said Byrd was a guy who was so good on film that the Ragin’ Bulls put in special formations and game-planned specifically for ways to deal with him.
“Hickory Ridge caught me peeking in the backfield,” Byrd said. “You’re going to get beat some. I learned from it.”
Nixon, an offensive lineman in his playing days at Catawba, believes o-linemen and DBs have something in common.
“They don’t really get noticed until they get beat, and then they take some heat,” Nixon said. “Our DBs have gotten beat a few times, but they’ve kept plugging. Byrd has made big plays all year. Hillie has really been good. He’s a natural.”
Byrd, Hillie, star receiver Kortez Weeks and linebacker Miles Poteat had West’s interceptions against Crest. Poteat’s was the biggest. It came on the second snap and set the Falcons up for a quick 7-0 lead.
“That was his first one of the season,” Byrd said. “I can’t tell you how happy he was, and we were happy for him.”
Byrd is a fast corner (4.6 speed) with good size (5-foot-11, 180 pounds). He plays with ferocity, but he combines that aggression with discipline.
Byrd disrupted Crest on special teams as well as defense. He was a demon on punt and kickoff coverage, making several devastating hits and also punished Crest receivers at every opportunity.
“Our defense has played well all year,” Nixon said. “Byrd is tough and he’s physical. He’s been a big part of what we’ve done.”
•••
NOTES: West defensive lineman Devin Turner had his best game of the season against Crest. “He controlled the line of scrimmage, forced a lot of double teams,” Nixon said. … Brandon Wallace isn’t one of the household names on West’s defense, but he’s important in the 4-2-5 as he has both run defense and pass defense responsibilities. He’s second on the team in tackles behind outstanding linebacker L.J. Robinson. “Wallace is a good fit for that position,” Nixon said. “He’s very good at running to the football and getting people on the ground.” … The state record for team interceptions in a season? The NCHSAA record book credits High Point Central with 34 in 1999. … West won’t get many chances to intercept passes Friday at Hibriten. Undefeated and top-ranked Hibriten is a flex bone team that runs 95 percent of the time.