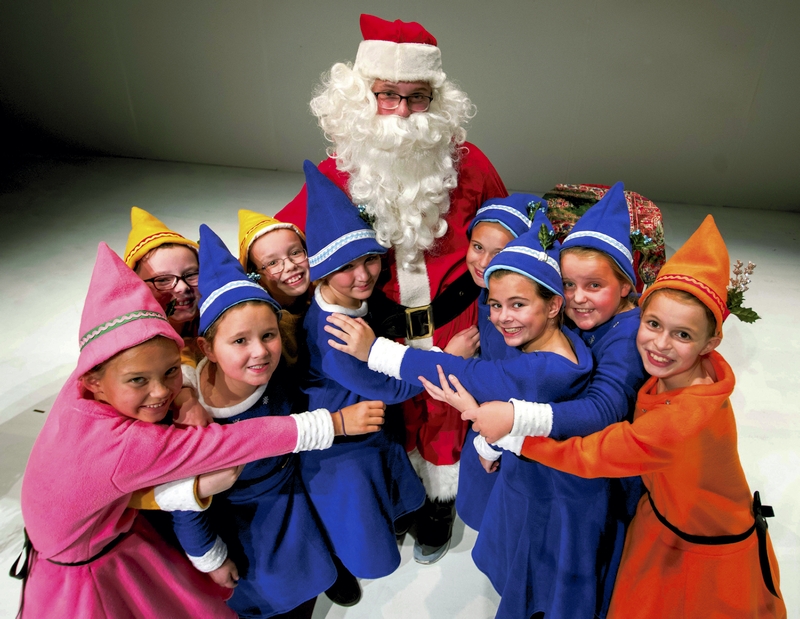 A title known the world over, “Elf The Musical” is a must-see holiday musical based on the cherished New Line Cinema hit, Elf (starring Will Ferrell in the title role) featuring songs by Tony Award-nominees Matthew Sklar and Chad Beguelin, with a book by Tony Award-winners Thomas Meehan and Bob Martin.

Buddy (Jack Wilhelm), a young orphan, mistakenly crawls into Santa’s bag of gifts and is transported to the North Pole. The would-be elf is raised, unaware that he is actually a human, until his enormous size and poor toy-making abilities cause him to face the truth. Santa (Alex Blumenthal) explains that Buddy’s father, Walter (Garrett Alewine), works in the Empire State Building, doesn’t know about Buddy’s existence and is on the “Naughty List” for his lack of Christmas spirit.

With Santa’s permission, Buddy embarks on a journey to New York City to find his birth father and discover his true identity. Once there he not only finds his workaholic dad, but a 10-year-old half-brother (Cooper Fleeman) who doesn’t even believe in Santa, a very surprised stepmom (Kaylee Hawley), and unexpectedly falls in love at first sight with a Macy’s saleswoman named Jovie (Jillian Rippey).

Buddy soon realizes that not only doesn’t his family believe in the spirit of Christmas, but neither do many other New Yorkers, which is a problem, because Santa’s sleigh is powered by the people’s belief in Christmas. Faced with this harsh reality, Buddy is determined to win over his new family and help New York remember the true meaning of Christmas.

This modern-day holiday classic, opening at the Norvell Theater next Thursday, is sure to make theatergoers of all ages embrace his or her “inner elf,” with a typically spectacular set by director Reid Leonard, upbeat and jolly choreography by Gwen Matthews and eye-popping colorful costuming by Ashley Ward and Eastern Costume Company.

If you like big Broadway musicals with hummable songs, lots of jokes and great dancing, get ready to dance your way into the holiday season with Piedmont Players Theatre’s production of “Elf The Musical.” The show’s message about family and innocence is a great gift to anyone you know who loves the holiday season!

“Just the thing for any christmas list – kid or grown up!” — Associated Press