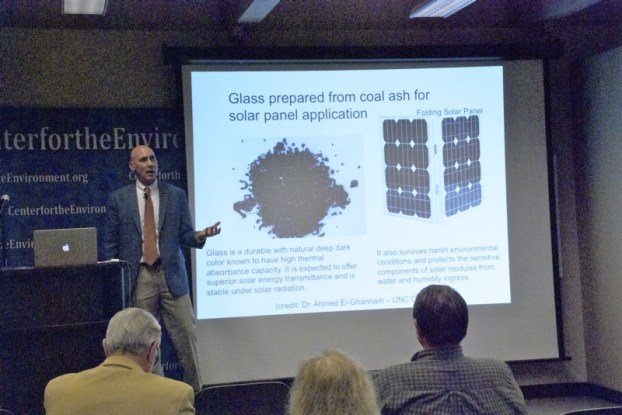 John Daniels speaks at the Center for the Environment. Submitted photo

By Hannah Davis
For the Center for the Environment

SALISBURY — When most people think about coal ash, they probably have a negative thought associated with it, such as rivers running with black sludge or the potential for groundwater contamination. But when Dr. John Daniels, chair of the Duke Energy National Ash Management Advisory Board, hears the word coal ash, he thinks of opportunity.

Professor and chair of the department of civil and environmental engineering at the University of North Carolina at Charlotte, Daniels spoke Nov. 17 at the Center for the Environment on the Catawba College campus about the opportunities and advancements developing with coal ash that he has seen firsthand.

When coal is combusted for uses such as electricity, it generates coal ash. Daniels claims that there are “150 million tons of coal ash in North Carolina” alone, with 2.5 million tons being added each year.

For years, coal ash has been mixed with water and held in storage ponds to keep the waste product out of the environment. However, since there have been instances in which these coal ash storage ponds have failed to contain the ash, causing spills into major waterways like the Dan River, one of the biggest challenges for developers and environmentalists has become how to view this ash as a resource instead of a waste product.

According to Daniels, currently, one of the biggest uses for coal ash is mixing it with concrete. Daniels claims that the “ash actually improves concrete performance,” making it an even stronger substance. Before the talk, Center for the Environment Executive Director Dr. John Wear briefly mentioned that the concrete foundation used for the Center for the Environment building was actually a concrete mixed with coal ash.

However, concrete is not the only thing coal ash is used for, according to Daniels. He also mentioned that one of his colleagues at UNCC, Dr. Ahmed El-Ghannam, is using glass prepared with coal ash for stronger solar panel prototypes. Despite all of these advancements, the current market for coal ash is only 1 million tons a year, a fraction of the amount of coal ash produced.

People like Daniels are still researching and looking for new ways to combat coal ash every day, but unlike the natural thought of trucking and storing, Daniels told his audience, “Let’s find a way to use this stuff (and look more toward) how can this be part of the community in a sustainable way.”

The Center for the Environment was founded in 1996 to educate the college community and the public about environmental stewardship and sustainability, provide value-added education for students through interaction with thought leaders and opportunities for experiential learning, and bring diverse people and groups together to catalyze sustainable solutions to our most persistent environmental challenges. For more information, visit www.CenterForTheEnvironment.org.

Catawba College News Service SALISBURY — Chad Springer is a non-traditional student in every sense of the word. And the... read more