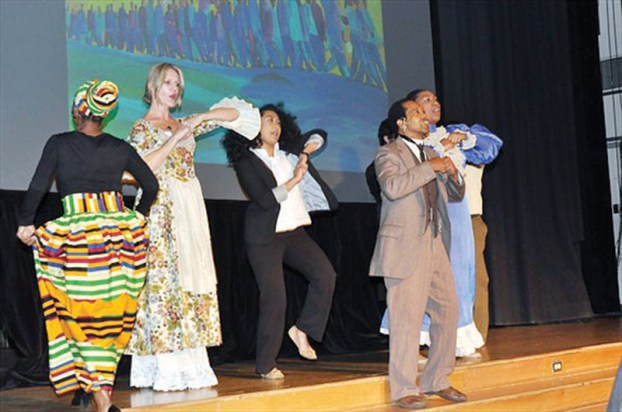 SALISBURY – Historically Black Colleges and Universities were brought to life like never before on Nov. 17 in an inspiring play that represented a collaboration between Livingstone College, Catawba College and Lee Street theatre.

Performed in Varick Auditorium, the play was written by Michael D. Connor, a theater instructor who’s taught at Livingstone for 11 years. It was part of a weeklong celebration commemorating the 10-Year Anniversary of Livingstone College President Dr. Jimmy R. Jenkins, Sr.

“I’ve seen many plays written and directed by Michael Connor, but this one on the history of HBCUs was spectacular,” said Dr. M.J. Simms-Maddox, chairwoman of the Livingstone College Department of History & Political Science and a published author. “As I sat among the others in the audience, I felt as if I were at a Broadway play in New York City. From start to finish, each scene moved with precision.”

Like many of the other 900 attendees, Simms-Maddox couldn’t say enough about the performance.

“Electrifying might be the best way to describe each actor, each of whom performed as if he or she had been on stage for years,” Simms-Maddox continued. “Short. Succinct. Informative. Also noteworthy was the crescendo effect when the scene changed to the creation of Livingstone College, and when we sang the alma mater. It was a truly magnificent production!”

“Dr. Felton said the institution was doing a tribute to Dr. Jenkins, and he wanted to know if I could create something to include HBCUs,” Connor said. “He said he wanted the play to be in collaboration with Lee Street theatre…”

Craig Kolkebeck, an assistant professor of theater at Catawba College and artistic director at Lee Street theatre, directed Connor’s play, titled “Where Do We Go from Here.” Adrian Smith, musical director at Cornerstone Church, served in that capacity for the play.

Connor knows HBCUs were created as a way to educate the children of just-freed slaves and that for decades African-Americans weren’t allowed to attend majority institutions. But he chose not to deal with negativity in his play.

“My play didn’t deal with racism, water hoses, dogs, etc.,” Connor said. “My play dealt with why black people need to get an education. I wanted it to be educational, and after it was over, people actually told me they learned things from it that they didn’t know. For example, one of the custodians at Livingstone told me he didn’t know what the colors red, black and green stood for until he saw the play. And many students and even one of our professors told me they didn’t know that Livingstone College is the only North Carolina HBCU that was founded and operated by African-Americans.”

“That people actually learned from the play is a blessing because that was one of my goals,” Connor said. “The other goal was to write a play that showcased HBCUs and their importance to American society while celebrating Dr. Jenkins. I think the play was successful because it did what I wanted it to do, which was to spark an interest in people’s minds about HBCUs, why they were started and how they were started. It’s all in line with what Dr. Jenkins references when he talks about connecting the bridge that was built by our ancestors to ensure future generations can continue to cross it and command their rightful place in the global society.”

The fact that Jenkins was president of Edward Waters College in Jacksonville, Fla., the sunshine state’s oldest HBCU, is referenced in the play. Jenkins was portrayed in the play by several cast members, who quoted what’s commonly referred to as Jenkinisms, or things he says often. An example is, “Education is the surest vehicle for upward mobility in the world.”

After leaving The Big Apple, Connor moved to West Hollywood, where he lived for 18 years and worked as a personal assistant to legendary actress Bette Davis. Following nearly two decades in California, for three years Connor taught English and a drama seminar in Hiroshima, Japan, where he also wrote and directed two plays. He returned to North Carolina in 1991, only to head back to California after eight months to direct a motion picture titled “The Deadly Curve,” which was written and produced by Zee Lo. He joined the staff at Livingstone in 2005.

“Livingstone is fortunate to have someone of Mr. Connor’s skillset as a member of our faculty,” said Dr. State W. Alexander, III, executive assistant to the president and vice president for communications & public relations. “His play on HBCUs was enlightening and mesmerizing and, as far as I’m concerned, puts to bed the question about the relevancy of HBCUs. The play was a great way to honor HBCUs and Dr. Jenkins, and I commend Mr. Connor for conceiving it and bringing it to fruition. It was truly a job well done.”