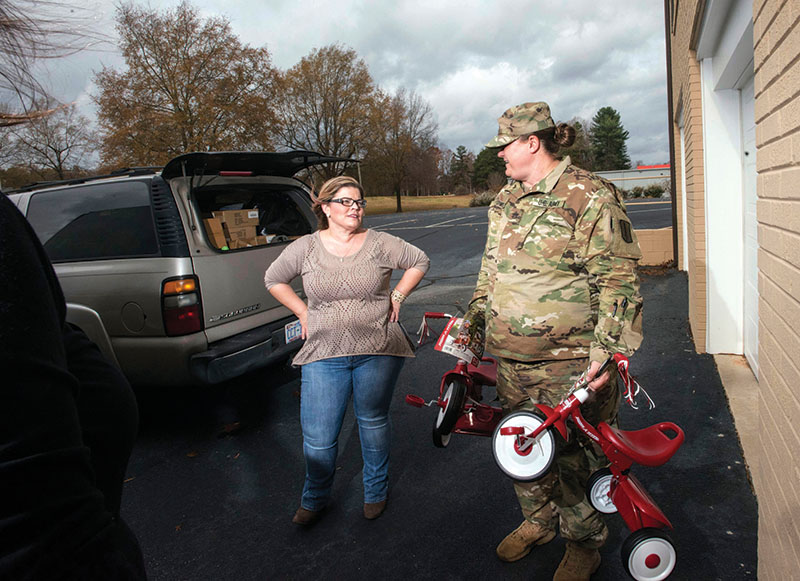 ROCKWELL —  Russ Roakes of Powles Staton Funeral Home had the exact number — 5,664 toys — and Diane Coffill said it definitely qualified as a first.

“It has not happened before,” said Coffill, state family program director of the N.C. National Guard’s Family Readiness Program. “We never have gotten 5,000 toys (at one time).”

Throughout the year, the Rockwell funeral home accepts contributions for its “Operation Toy Soldier” program. It has 16 collection barrels in place around the county, makes a “Christmas in July” push for toys and also accepts toy contributions during its occasional appreciation meals for veterans and law enforcement.

In conjunction with Veterans Day, for example, the funeral home sponsored a free lunch for 600 veterans.

On Wednesday morning, Staff Sgt. Tammy Fowler and Sgt. First Class April Smith drove a 15-foot truck from the Joint Forces Headquarters in Raleigh to pick up those 5,000-plus toys the funeral home had collected.

The first weekend in December is a big drill weekend for National Guard units, and many of the items will be distributed to service members and their families then, or at various Guard family days throughout the state.

Rowan County Sheriff Kevin Auten and Rowan Register of Deeds John Brindle, both strong supporters of Operation Toy Soldier, were among the people loading the toys onto the N.C. National Guard truck and into two private vehicles — a Ford F-150 pickup going to the Winston-Salem region and a Chevy Suburban headed to the Greensboro region.

The donated toys ranged from Hot Wheels to Radio Flyer tricycles, from coloring books to Hess trucks, from stuffed animals to Army helicopters. The toys accepted through the year touched all ages, from toddler to teenager.

“If these were the old-school Hot Wheels,” Auten said, carrying an industrial-sized plastic bag full of the toys toward the truck, “we could retire.”

The collecting of toys has not stopped. Roakes said Operation Toy Soldier will continue around-the-clock this extended weekend from 8 a.m. Friday to 8 p.m. Sunday in the parking lot of Salisbury’s Walmart.

Meanwhile, Arbe Arbelaez, coordinator for Toys for Tots of Rowan County, also will be doing his annual three-day sit-in on the roof of Krispy Kreme in raising funds and toys for his organization.

Toys for Tots is a generous supporter of Operation Toy Soldier and contributed items such as five cases of Hess trucks and multiple boxes of coloring books and puppet books to Wednesday’s big payload.

“When it comes to helping servicemen’s families, I’m all for it,” said Arbelaez, a retired Marine who helped load the toys Wednesday at the funeral home. “What these guys are doing is phenomenal.”

Chassidy Hepler is the Greensboro regional representative for the NCNG Family Readiness Program, and it was her big SUV that some of the toys were going into Wednesday.

A retired member of the National Guard, Hepler said Guardsmen whose families receive the toys “are just like everybody else.” They work full-time in civilian jobs and face the same kinds of struggles, but they also are committed to serving their state and country through the Guard.

Roakes said the additional toys collected in the next three weeks also will go to the NCNG Family Readiness Program.

“Some of these toys we get — it’s hard not to play with them,” said funeral director Will Staton, looking at the large collection of toys stored in the funeral home’s garage.

This is the third year Powles Staton has collected toys as part of Operation Toy Soldier, a nationwide program of Veterans Funeral Care.

In the first year doing Operation Toy Soldier, Roakes said he collected 175 toys. Last year, the number increased to 2,000, and Roakes has a goal of 7,000 this year, after the next three weeks are counted in.

Roakes said Brindle has one of the more popular drop-off barrels for toys at his Register of Deeds Office. The Sheriff’s Department has three different barrels — its Main Street headquarters, the Landis office and the Rowan County Detention Center.

At several of those locations, the funeral home also provides collection barrels for worn U.S. flags, which are later used with cremation services for veterans.

Others helping with the loading of toys Wednesday included David Coffill, who served 30 years in the Guard and is the husband of Diane; Terry Jones; and Courtney Coyle, who works with the Family Readiness Program.

Considerable sorting of the toys and matching them up with the needs of families is still ahead at the main headquarters and regional locations.

The reward is worth it.

“There is nothing like the face of a child at Christmas,” Coffill said. 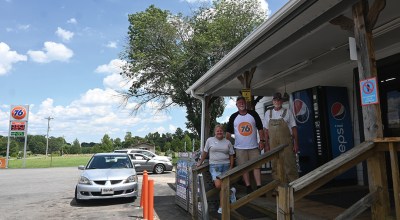 Give and receive: Rockwell general store keeps gas prices down in midst of inflation