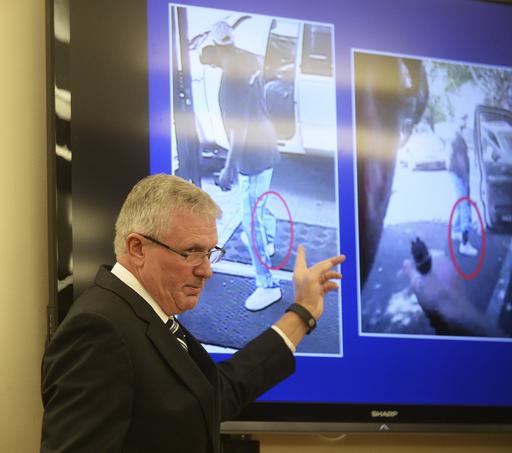 FILE – This combination of photos provided by the Charlotte-Mecklenburg Police Department on Sept. 24, 2016 shows an ankle holster, top, and gun which police say were in Keith Scott’s possession at the time he was fatally shot by police in Charlotte, N.C., on Sept. 20.

Of all the words Mecklenburg District Attorney Andrew Murray said in his news conference late Wednesday morning, none may have been truer than his first.

The shooting death of Keith Lamont Scott was exactly that — a tragedy for Scott’s family, which has had to grapple with a sudden and very public loss. It was a tragedy, too, for Charlotte-Mecklenburg police officer Brentley Vinson, who fired four bullets in the heat of a moment few can imagine.

Vinson will not face criminal charges for that September shooting, Murray announced Wednesday. The officer, he said, “acted lawfully.” We heard nothing that makes us disagree with the district attorney’s determination.

For more than an hour Wednesday, Murray laid out the reasons for his decision, which he and 15 career prosecutors unanimously arrived at after reviewing the evidence. Murray also released his office’s full report on the shooting to the public. It was a transparency and throughness that demonstrated the importance of the case to Charlotte, which was jarred by violent protests in the aftermath of the shooting.

Murray’s report revealed convincing evidence that Scott not only was in possession of a gun in the minutes and moments before being confronted by police, but that he did not drop the gun despite being ordered to do so. That, in itself, presented a threat to Vinson and the other officers, and the law is clear in allowing police to determine that such threats need to be addressed, even lethally.

Attorneys for the Scott family expressed disappointment Wednesday, although they didn’t explicitly dispute Murray’s legal decision. They did, however, leave open the door to a civil lawsuit, with which they might pursue different questions, such as whether officers could have avoided or deescalated the confrontation that led to Scott’s death. Those, too, are critical issues that the courts, and perhaps CMPD, might wrestle with in the coming days and months.

The Scott shooting has also prompted larger questions about the relationship between police and blacks in Charlotte, and about Charlotte falling short in addressing inequality in housing, jobs and education. Those issues are deep-rooted, and they were at least a part of the grievances that fueled the Scott protests in September.

City and community leaders, including the Charlotte City Council and Charlotte Mecklenburg Board of Education, have begun to address at least some of those concerns. If the city is to “build a stronger Charlotte” in the aftermath of the shooting, as it said in a statement Wednesday, leaders need to do so in concrete ways that go beyond mere talk and hand-wringing.

On Wednesday, however, one issue — and one tragedy — needed to be addressed. We hope that the Scott family — and our city — can find peace with the district attorney’s conclusion.

Al Hunt: One senator can be bulwark against Trump

There may be one senator, not Chuck Schumer or any other Democrat, who could be a check on some of... read more