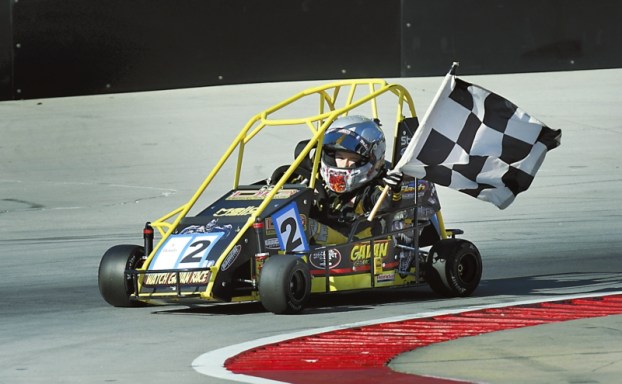 A driver takes a victory lap with the checked flag in one of the races on the NC Quarter Midget track in the 12th Annual Carolina Fall Nationals. Wayne Hinshaw, for the Salisbury Post

SALISBURY — If you missed the N.C. Quarter Midget 12th Annual Carolina Fall National races at the N.C. Quarter Midget Speedway off Peach Orchard Road over the weekend, you will have to wait until April to get a look at the competition between the 5- to 16-year-old drivers taking part in what has been called the “little league” of motorsports.

Many of today’s NASCAR drivers got their first taste of racing in the quarter midget cars around the country.

More than 100 young drivers gathered for final races of the year in an event that drew racers from Ohio to Florida and states in between. The track in Salisbury, owned by NASCAR’s Bobby Laborite Foundation, is the only track between New Jersey and Atlanta following the I-85 highway.

There is a feeling at the track that most Rowan County folks are not aware that the quarter midget track is located in Salisbury. Admission is free for fans.

At the start of the “Light 160 class” race, the first class race of the day, all the handlers line the fence of the pit area to watch their young drivers. Cal Boprey, the father and handler of 10-year-old Will Boprey from Statesville, is there to see his son’s No. 1 red car circle the 1/20 of a mile track.

This track has short straight aways so the speed is kept down. The handlers describe the track as a “handling track” with the long sweeping curves requiring driving skills and not super fast speed.

The handlers’ bodies cast long shadows onto the concrete track as they lean forward over the fence and the flagman waves the green flag. The day of racing begins.

Butch Lamb, of the United States Auto Club, says the local track “is the finest track in the country.” The goal in quarter midget racing is “to develop kids and promote family values while having fun, safe competition.”

Lamb continues, “They (youth drivers) don’t always do good on the track so they get to develop good people skills for life,” in dealing with the competition.

One of the youngest drivers in the association, is Jaxon Merrifield from Rockwell.

Now 6 years old and a Rockwell Elementary kindergarten student, he started practicing at 4 and a half. The rules didn’t allow him to race in events until he was 5 years old. With his dad, Cody Merrifield, as his handler (crew chief), he races in the “Red Rookie Class” with other beginning drivers. Jaxon has won three races this year.

Jaxon says, “No person at school races except me. I always want to be in first place, and I never get mad if I’m not. Sometimes I do cry.”

His dad corrected him by saying, “He does get mad, but he has learned to deal with it.”

Jaxon says his friend Brady plays with toy cars, and Jaxon picks with him telling Brady he needs to get a real car.

Elam Lowery, a 10-year-old Millbridge Elementary student, explains that this is his first year racing, but it has been a good year. Smiling, he said he has finished in the top three positions in 28 races this year, winning three. His handler is his grandfather, Daniel Howser.

Elam and Benjamin Rogers, a 10-year-old Hurley Elementary student, practice together after school at the track.

“Elam and I are good friends,” Benjamin says, “but we have been in wrecks together on the track.” Benjamin’s grandfather and handler is Jack Neubacher.

Tyler has been racing for four years. He says, “It’s fun to go out fast and pass. I’ll go play with my friends (other drivers) after the race. I got in a wreck on the start yesterday, and I got real mad, but I ended up second.” His handler is his dad, Dave Conover.

Thirteen-year-old Levi McBride from Lexington has been driving for two years. He is a bigger boy and races in the Heavy Honda and Heavy 160 Classes. The Tyro Middle Schooler laughed and said in referring to his size, “ I like to eat a lot of chicken biscuits.” He is the Summer Series champion in both his racing classes. His handler is Jorban Smithson, who is employed with Childress Racing.