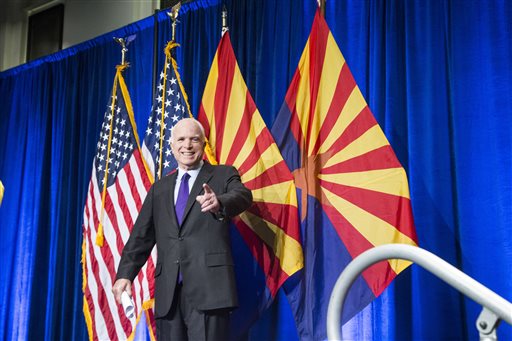 Al Hunt: One senator can be bulwark against Trump There may be one senator, not Chuck Schumer or any other Democrat, who could be a check on some of President Donald Trump’s likely excesses: John McCain.

The president-elect and the five-term Republican from Arizona are almost polar opposites on issues ranging from service and public responsibilities to national security. McCain, the chairman of the Senate Armed Services Committee, has made clear he will oppose Trump policies that would amount to appeasement of Russia’s Vladimir Putin on Syria or elsewhere, or any effort to circumvent the law and revive “enhanced interrogation” methods against terrorists that he has described as torture.

McCain could be big thorn in Trump’s side on ethics. He has been a fierce fighter against corruption since he was ensnared in a savings and loan scandal more than a quarter-century ago. And he will set a much higher ethical bar than Trump, who seems oblivious to the potential conflicts of interests presented by his far-flung business empire.

McCain never fully got over his loss to Barack Obama in the 2008 presidential race and has been less of an independent maverick these past eight years. But winning his bid for what probably will be his final term may be liberating for the 80-year-old senator.

He and Trump have little regard for each other. During the primary campaign, Trump, who never served in the military, belittled McCain’s 5 1/2 years of captivity as a prisoner-of-war in North Vietnam, declaring, “I like people who were not captured.” He also accused the senator of neglecting veterans.

Trump bitterly resents McCain for withdrawing his endorsement this fall after the disclosure of a recording on which the candidate could be heard bragging about assaulting women. McCain deeply resents Trump’s attack on the mother of a Muslim U.S. Army officer who was killed in Iraq.

A recent conversation between the president-elect and the senator did not go well.

If McCain clashes with the new president on some national security and ethics issues it likely would embolden a handful of other Republicans and wobbly Democrats to not be intimidated by Trump.

Yet don’t expect McCain to oppose Trump and other Republicans on tax and spending or most domestic issues. Economic questions never have been McCain’s forte, and he holds pretty traditional conservative Republican views, including as an advocate of free-trade pacts. Although he has long been anathema to the right wing, he is far more conservative than some liberal admirers used to hope he was.

One exception may be immigration: He has been an advocate of reform and is turned off by Trump’s immigrant-bashing. Both Republicans carried Arizona this month, though McCain’s margin was four times larger and he did considerably better with Hispanics.

On national security, Russia will be a major flashpoint. Trump has spoken favorably of Putin and wants to cut a deal with the former KGB agent. McCain considers Putin a thug and has called Russia “a gas station run by a Mafia that is masquerading as a country.”

If Trump tries to cut a deal with Putin that allows the Syrian dictator Bashar al-Assad to remain in power, McCain likely would go ballistic. In Asia, he’s worried that Trump seems more determined to label China a currency manipulator and erect trade barriers than to prevent the country from dominating the South China Sea. The senator believes those priorities should be reversed.

In some cases, relations between the two may depend on Trump’s appointments to national security posts. McCain would support retired Marine General James Mattis as secretary of defense, despite reservations about putting a military man in charge of the Pentagon. He was worried Trump might appoint Senator Jeff Sessions of Alabama, who instead will be nominated for attorney general.

This is very likely McCain’s final term. In 2002, riding up to the Senate, he spotted Strom Thurmond of South Carolina, then 99, being wheeled into the office building, seemingly oblivious to his surroundings. “If you ever see me like that,” McCain said, “shoot me.”