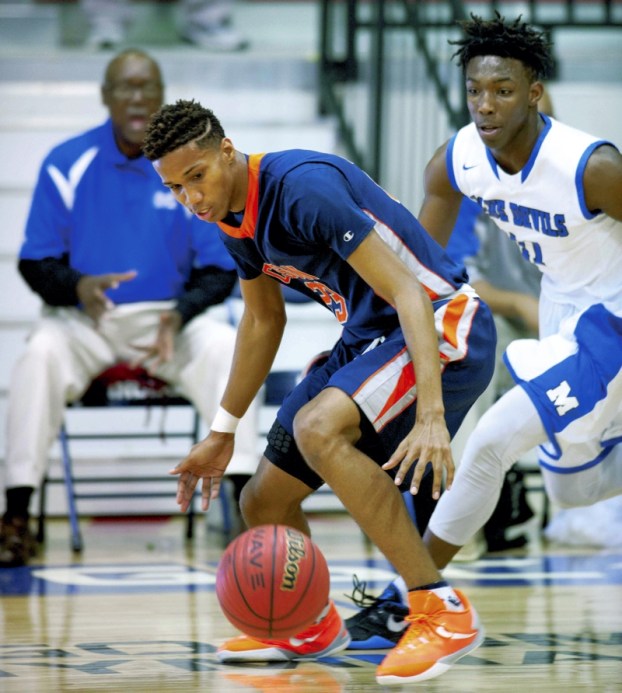 CHINA GROVE — Brenden Westbrook got the first two points on a thunderous dunk, and Carson’s boys basketball team never looked back.
Carson was ahead 12-1 after a few minutes — a Toga-wearing student section loved it and went on to beat visiting East Rowan, 65-47, for a South Piedmont Conference win.
“It’s a conference win and it’s a home win that we had to have,” Carson coach Brian Perry said. “We couldn’t be in any better shape after two games. We’re 2-0.”
Carson is a team with some weaknesses. The Cougars aren’t deep — eight guys in uniform on Tuesday — and they don’t have anyone taller than 6-foot-4. Still, they did a lot of things right and took care of the Mustangs.
“That’s a good-shooting team, and you’ve got to be able to defend the 3-pointer if you’re going to beat them,” East coach Kurt Misenheimer said. “We could’ve defended a whole lot better than we did.”
Jamarius Hairston slashed and dunked his way to 25 points to lead the Cougars, and they made eight 3-pointers. Four of those 3-pointers came from sophomore Cole Perry, the coach’s nephew. Perry spent last season on the varsity, not playing much, but learning a lot in practice. He’s also had a growth spurt since last year and is a 6-footer now.
“I feel a lot more confident with my shot,” Cole said.
After East scrapped back within 16-11, Perry stroked back-to-back 3-pointers early in the second quarter to extend Carson’s advantage to 11 points.
Guard Lucas Morton kept East from getting blown out in the first half. He scored 14 of his 17 points before the break, but Carson still led 35-20 at halftime.
“We jumped on them quick by being aggressive and by making a lot of shots,” Hairston said. “But then we let them back in it. We’ve still got to pick up the defense, and I’m sure that’s what we’ll work on this week.”
East (0-3, 0-2 SPC) had one rally left, and when Carson went cold late in the third quarter, the Mustangs got consecutive inside buckets from 6-4, 250-pound freshman Brandon Jefferson. Then Christian Bennett swiped a rebound and stuck it in to cut Carson’s lead to 42-33.
But that was as close as it got. The Cougars got a key hoop from A.J. Banks to stop East’s mini-run and a dunk by a cutting Hairston off a nice pass by Owen White to push the lead back to 46-33.
When Banks buried a 3-pointer and Hairston swooped in for a bucket off a steal, Carson’s lead went back to 20 points early in the fourth quarter — and it was over.
“We hit a lot of shots,” Coach Perry said. “And when we missed, we did a pretty good job of getting the ball back.”
East has the bigger team with Jefferson and 6-6 sophomore Elton Hooper, but Carson won the rebounding battle.
“They out-hustled us some on the boards,” Misenheimer said. “We’re a team looking for an identity right now. We’re looking for guys who want to bust their butts. We’ve got a lot of fishing rats and hunting rats and four-wheeler rats, but we need some gym rats.”
Morton looked like a gym rat. He made four 3-pointers, but no one else for the Mustang scored more than seven points.

By Mike London mike.london@salisburypost.com SALISBURY — A lot of Catawba Indians scored a lot of points on Monday at Goodman... read more