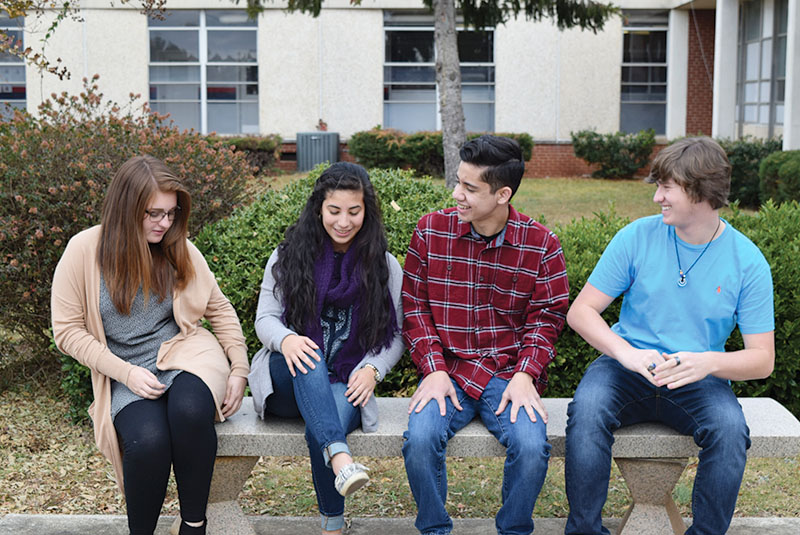 From left to right: Katie Howard, Emily Avalos, Ethan Diaz and Spencer Byrd were all selected as finalists for the 2017 Carnegie Hall Honors Performance Series in February. Rebecca Rider/Salisbury Post

GRANITE QUARRY — They found out just before Halloween. Katie Howard, a senior at East Rowan High School, said she was shopping for a costume in Party City when she got the e-mail telling her she was a finalist for the Carnegie Hall Honors Performance Series. Howard, along with classmates Emily Avalos, Ethan Diaz and Spencer Byrd, had been on edge for a while.

“I was checking my e-mail nonstop,” Diaz said.

It had been months since they submitted their audition tapes to the series — Avalos and Diaz for choir and Howard and Byrd for band and symphony. When she finally got the e-mail, Howard, who plays trumpet, said she was too nervous to look and made her mom open it. Howard was also selected to perform in the U.S. Army All American Marching Band in February in San Antonio, Tex.

The performance series, held annually in New York, receives thousands of audition tapes each year from the U.S. and abroad.

“It was like, ‘I hope, but you never know,” Howard said. “Because it’s like an international thing.”

Diaz, who sings bass, is the only junior in the group — the rest are seniors. For some, it’s an opportunity that’s been a long time coming.

“I was really, really excited,” Byrd said. “I’ve been working on this for a while.”

Byrd, who plays trombone, auditioned last year but was not selected as a finalist.

All four are used to performing. The East Rowan chorus sings at a different church every Sunday, and both groups compete in All County and All District competitions in addition to several other public performances a year.

“But Carnegie Hall is a totally different level,” Howard said.

Howard and Diaz said that looking at pictures of the concert hall is a bit intimidating. But, there are things to be excited about as well. Diaz mentioned that he’s eager to work under world-famous conductors and to sing alongside talented performers from all over the world.

“I think it will be a nice blend of culture,” he said.

Performance series finalists also get a tour of New York City, a short boat trip and a chance to see a Broadway production. But it’s not free. Each student has between $1,200 and $1,600 left to raise in order to cover plane tickets and other trip costs. All have set up GoFundme pages, and on Dec. 15 between 6 p.m. and 8 p.m. the four will hold a fundraiser at Cold Stone Creamery in Salisbury with a portion of all proceeds going towards their trip. Avalos said the group plans to perform at Cold Stone that evening, as well.