Decorators descend on Hall House, getting it ready for another Christmas 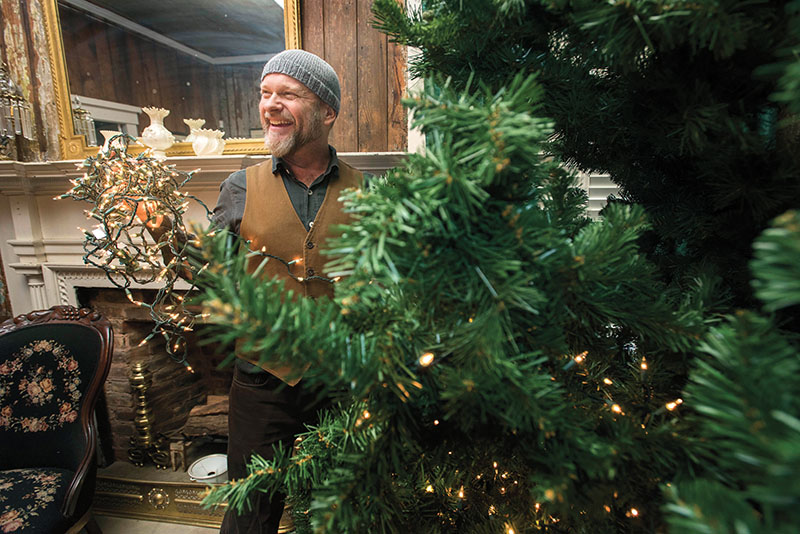 JON C. LAKEY / SALISBURY POST Brian Pfaff shares a light moment as he decorates the large Christmas tree in the parlor at the Hall House. Volunteers begin work on decorating the historic Hall House in advance of the Christmas holiday tours that will be starting soon. Monday, November 28, 2016, in Salisbury, N.C.

SALISBURY  — Brian Pfaff spent a good part of Monday afternoon trying to make the strings of white lights go as far as possible on the Hall House Christmas tree.

This tree in the house museum’s front parlor is a tall one, and Pfaff hoped he had enough lights to cover most branches. Just erecting the giant artificial tree — the local fire marshal isn’t wild about live, combustible greenery in the historic landmark — was a major task.

Pfaff has become an expert, through trial and error.

“I’ve taken this one up and down about six times during the past two days,” said Pfaff, property manager for Historic Salisbury Foundation.

Elsewhere, armies of volunteer decorators have descended on Historic Salisbury Foundation’s Hall House this week in preparation for a special Christmas reception from 4-6 p.m. Thursday, followed by the house’s being open to the public during normal weekend hours through the holidays.

As usual, the Hall House also will be open for candlelight tours from 5:30-8 p.m. Christmas Eve.

Thursday’s reception is specifically for all the people who helped in decorating the 1820 home, Hall House docents, HSF volunteers and special invitees such as Salisbury City Council.

The Hall House is located at 226 S. Jackson St.

Individuals or teams are assigned to decorate each of the rooms, hallways and the outside of the Hall House. Members of the Master Gardeners, who are veteran decorators at the Hall House, came in full force Monday morning to work their magic on the dining room.

It was a well-planned, efficient operation, and soon the dining room was magnificent in touches of silver, gold, white, red and wood. The dining room table held an aucuba-dominated centerpiece, which the fire marshal allows as one of the few live plants among the decorations.

The Master Gardeners will keep the centerpiece fresh.

“They go crazy in that dining room,” said Diane Dillon Hooper, who was decorating Dr. Josephus Hall’s front bedroom upstairs. “And they’re so talented. They think about it, unlike me.”

“With the Victorians, the more the better,” Hooper said. “Because the house was a showplace, it probably would have been decorated to match.”

The inside at Christmas smelled a lot like the outside — fresh and alive.

Pam Morris, chairman of the HSF’s decorating efforts, has been camped out at the Hall House Monday and today as the teams come and go.

The Hall House gives any decorator a lot to work with, thanks to things such as its high ceilings, chandeliers, fireplaces, long staircases and spacious rooms with furniture original to the Hall family.

Donna Thomas and Cindy Martin were in charge of decorating the hallways on both floors, including the long staircase, which they festooned with garland and red ribbons. Had Thomas been a decorator for the Hall House before?

“For the Hall House, no,” Thomas said. “For a thousand different places, yes.”

“Most groups bring their own stuff,” Morris said of the materials the decorators need.

Since 1991, the Christmas Eve tours of the Hall House have been led by Barbra Upright, along with her family members and other volunteers.

Upright follows a tradition of hiding two glass pickle ornaments in the tall tree in the front parlor. Children return each year in hopes of finding the ornaments and having good luck in the year ahead.

It’s hard to believe, but for almost 200 years, Christmas has been celebrated in the Hall House, from the young women of the Salisbury Academy to four generations of the Hall family.

HSF bought the house in 1972, the year of the organization’s founding.

HSF Executive Director Karen Hobson stopped in Monday to see how things were going. It wasn’t long before she was sent on an errand.

“Does anybody else need anything from Lowe’s?” Hobson asked.

Maybe more lights for that tree?