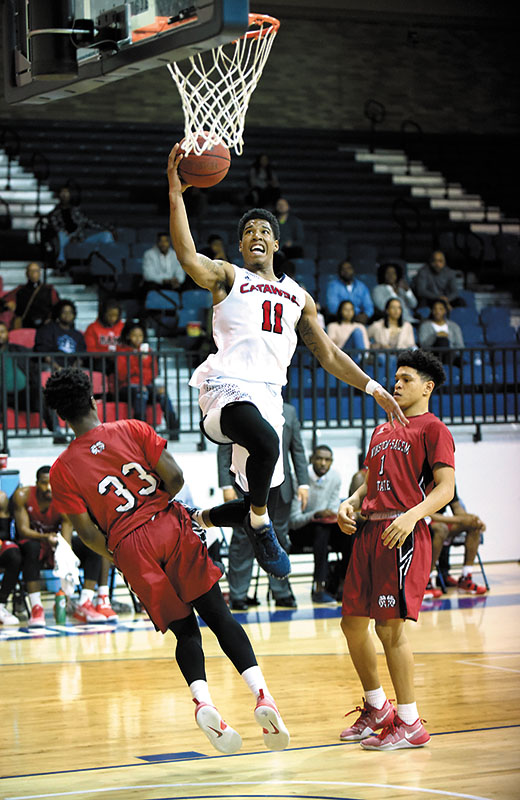 SALISBURY — A lot of Catawba Indians scored a lot of points on Monday at Goodman Gym.
Gilbert McGregor didn’t. He scored two.
Still, it was McGregor who made the decisive plays at the critical juncture in Catawba’s 86-71 win against the Winston-Salem State Rams.
Catawba (4-2) did just about everything right for 15 minutes and took a 39-23 lead when a Jerrin Morrison steal set up a Ben Sealey transition 3-pointer with 4:42 left in the first half.
But Catawba staggered and stumbled the rest of the half, and when Carlos Rankins buried a buzzer-beating 3-pointer the Rams were within 45-40 at the break and had major momentum.
“Coach (Rob) Perron talked at halftime about how critical those first few minutes of the second half were going to be,” said Jameel Taylor, who had 17 points and eight assists for the Indians. “We’d stopped doing the things we needed to do late in the first half and we could tell Winston-Salem was starting to get confident.”
The second half opened with a series of Catawba misfires, and a free throw by the Rams’ Robert Colon (16 points) made it a 45-41 game. Then the Rams got the ball back again when Rankins soared to block a Catawba layup.
But that’s when McGregor stepped forward as the catalyst for a Catawba surge. He rebounded a WSSU miss in the paint and whistled a crisp outlet pass to guard Rakeen “Rock” Brown. Brown’s driving layup accounted for Catawba’s first points of the half and a six-point lead.
McGregor missed inside on Catawba’s next possession, but he stayed with it and grabbed the offensive board. Then he fed Troy Warren for the bucket that put Catawba ahead by eight. When Andrew Ingram knocked down a tough jumper, the Indians were back on top by 10 and they gradually re-established command of the contest.
“We had to be tough and we needed to make some plays on the glass,” McGregor said. “I was able to get rebounds, and then Rock and Troy made good finishes, and we didn’t relinquish the lead. That’s what my role on this team is — play hard and contribute some of those things that don’t necessarily show up on the stat sheet.”
When Catawba coach Rob Perron examined the stat sheet he saw two things he really liked — only 10 turnovers by the Indians in a hectic game that included some fullcourt pressure by the visitors and a 50-36 edge for Catawba on the glass against a bouncy opponent.
“Our whole thing is effort and the best indicator of effort is rebounding, and we were plus-14 there,” Perron said. “I thought we shared the ball well (14 assists) and we handled their pressure well. When you limit turnovers to 10 and win the boards by 14, you’re probably not going to lose.”
Not that the Indians were perfect. Their so-so 3-point shooting (5-for-21) and shaky free-throw shooting (15-for-28) kept things interesting most of the night. Ingram played a scintillating, attacking game with 14 points and 11 boards, but somehow he shot 2-for-8 from the foul line.
It was K.J. Arrington who got the Indians rolling in the first half. He hit 3-pointers on consecutive possessions to turn a 13-9 scrap into a 10-point lead. He scored 14 of his 20 points before the break.
“It was one of those games where we passed the torch,” Perron said. “Different guys carried us at different times.”
Transition defense, the downfall in the Lenoir-Rhyne loss, was good for the Indians. Catawba had a 22-4 edge in fastbreak points, and the 6-foot-9 Warren came alive in the second half to lead Catawba to a 54-26 edge on points in the paint.
The big senior’s follow dunk with 9:14 remaining provided a 65-52 lead and an emotional lift and was the last straw as far as any comeback attempt by the Rams. Warren finished with 11 points and 13 rebounds.
“That second half was one of the best halves Troy has played,” Perron said.
Nate Long, a 6-foot-5 forward, had 14 points and 14 rebounds for the Rams (3-3), who shot 37.7 percent for the game.
The Rams were 6-for-13 in the first half from the 3-point line, but Catawba defended the bonus line better in the second half. The Rams finished 8-for-21 from long range.
“We cleaned some things up defensively,” Perron said.
While Catawba is a disappointing 0-2 to start South Atlantic Conference play, the Indians have looked good in the non-conference affairs. They’ve won all four and have beaten good teams.
“Winston-Salem State was one of the most athletic teams we’ve played so far,” Taylor said. “But our rebounding was strong, we shared the ball, and we played good team defense.”
Catawba travels to North Greenville on Thursday for a 7 p.m. non-conference game. Catawba won’t be at home until Dec. 10 when it takes on SAC opponent Mars Hill.

By Mike London mike.london@salisburypost.com SALISBURY — For Catawba’s women’s basketball team, 30 disastrous seconds at the end of the third... read more