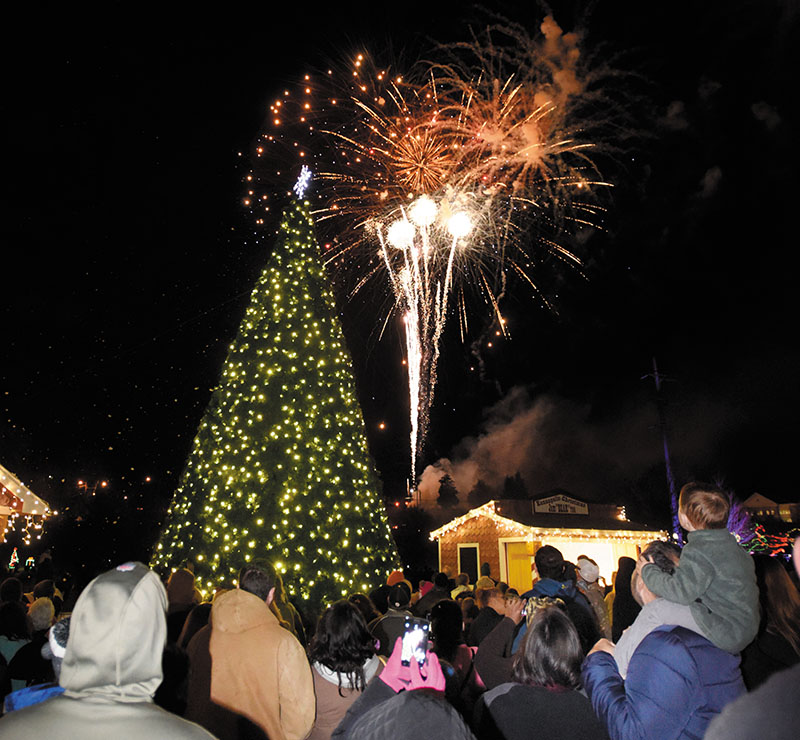 The Kannapolis annual Christmas Tree Lighting in the Village Park with a fireworks show overhead. photo by Wayne Hinshaw, for the Salisbury Post

KANNAPOLIS – The holiday season has officially started in Kannapolis and the Village Park with the Annual Tree Lighting Ceremony on Saturday.

Hundreds of people crowded Village Park to watch as the Community Christmas Tree was lit to kick off the Celebration of Lights.

After attendees sang along to classic Christmas carols like “Jingle Bells” and “Silent Night,” Santa Claus was brought out to help start a countdown.

When the crowd’s countdown reached one, the lights on the tree and the star on top were lit up, and fake snow was blown from the tree. The crowd then enjoyed a fireworks show that drew oohs and ahhs from delighted children and parents.

Once the fireworks were over, people dispersed into various lines for hot cocoa, pictures with Santa or a ride on the Winterland Express. The train takes riders through the park to look at all the lights draped on trees and other light displays. The train will run until Dec. 30 from 6 p.m. to 9 p.m. Sunday through Thursday and 6 p.m. to 10 p.m. on Fridays and Saturdays.

It costs $2 to ride the train, but admission to the park and walking around to see the lights is free.

Alisha Ryan and her daughter Kayla Crayton said riding the train was their favorite part of the evening. They ride every year.

This year they brought Courtney Stephens, Crayton’s college friend, along with them. She said she was having a good time.

“It gets you in the Christmas spirit,” she said.

Crayton said it is a good community-relations builder.

“It kind of brings the community together,” she said.

Lisa Putnal, Tessa Ferguson and husband and wife Victor and Venessa Huaman actually missed the lighting of the tree because they were in line getting hot cocoa. They decided to set up chairs and enjoy their drinks anyway.

Putnal said she enjoyed the event because it is family-friendly.

“You don’t have to worry about anybody crazy,” she said.

Vanessa Huaman said the first time she attended the lighting it was better than she thought it would be.

“It exceeded my expectations,” she said.

Salena and Douglas Burnette came with their daughter Cheyenne and her 4-month-old daughter Sarah. This year will be Sarah’s first Christmas, and they wanted her to experience its full effect.

“It’s memories that you can’t get back so you’ve got to take advantage of it,” Salena Burnette said.

Families can visit Santa in his studio at Village Park until Dec. 30, and Mrs. Claus will also be making special appearances on different nights to read short stories to children. The Kannapolis Singing Bears will perform a 30-minute Christmas Carol each hour on the hour starting at 6 p.m. every night.