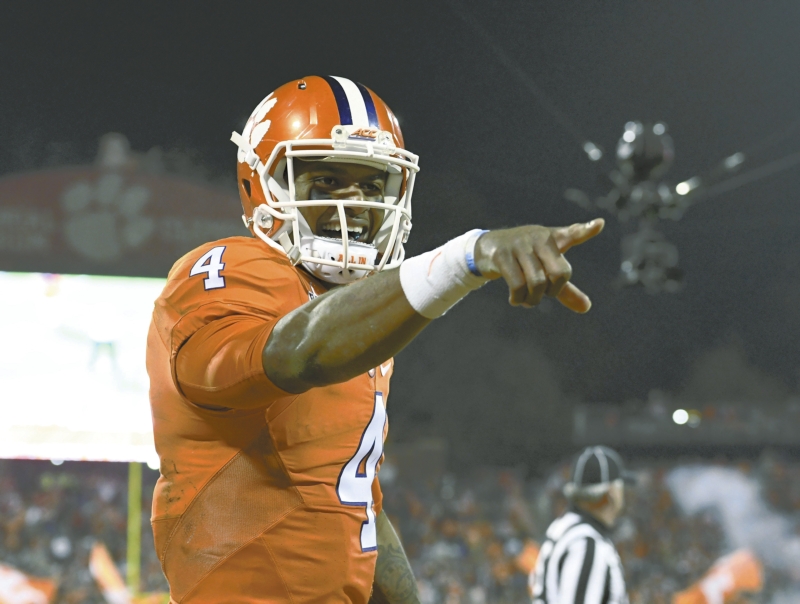 CLEMSON, S.C. (AP) — Deshaun Watson tied his career high with six touchdown passes, three to Mike Williams, and No. 4 Clemson took another, strong step to the College Football Playoff with a 56-7 victory over rival South Carolina on Saturday night.

If the Tigers (11-1, No. 4 CFP) don’t stumble against Virginia Tech next week in the Atlantic Coast Conference championship, they’ll be off to college football’s final four for a second straight season.

The Gamecocks (6-6) were little more than speed bump on that road that Clemson got past quickly, jumping out to a 21-0 lead in the opening quarter and cruising to a third straight win in the Palmetto State’s biggest sporting event.

Watson finished with 347 yards and matched the six TDs he threw in his first college start against North Carolina in 2014. He also likely crept a bit closer in the Heisman Trophy race to Louisville quarterback Lamar Jackson, whose team lost for a second straight week.

Watson and the Tigers also wiped out memories of their last Death Valley game, a stunning, 43-42 loss to underdog Pitt — Clemson’s first home loss in more than three years.

Watson and Williams got things going with a 34-yard TD catch. Then Williams’ dragged South Carolina’s Jamarcus King on his for several yards during a 19-yard scoring catch. By the time Jordan Leggett scored on a wide open 11-yard grab, Clemson was in front to stay and Gamecocks defenders were yelling at each other.

Clemson’s defense held the Gamecocks to 62 yards in the first half and posted its biggest margin of victory in the series since a 51-0 win in 1900.

South Carolina certainly made strides over the second half with young players on offense like quarterback Jake Bentley and tailback Rico Dowdle. The Gamecocks will need to add a lot more talent on both sides of the ball before it can match up with the Tigers.

Clemson found its dominating form in its final home game of the season after its stunning, 43-42 fall to Pitt the last time here two weeks ago. More importantly, the Tigers showed a resolved it will need for a second straight trip to the College Football Playoff.

South Carolina will await its bowl destination, the most likely choice the Independence Bowl.

Clemson will face Virginia Tech in the ACC championship game in Orlando, Florida, next Saturday night.

SAN ANTONIO (AP) — Dalton Sturm and Jared Johnson combined for 414 yards passing and three touchdowns and UTSA defeated Charlotte 33-14 on Saturday night to become bowl eligible for the first time in the six-year history of the program.

Sturm connected with Kerry Thomas on a 73-yard score and 13 yards to Brady Jones in the first half with the Roadrunners (6-6, 5-3 Conference USA) leading 17-7 at intermission. Victor Falcon kicked his second field goal in the third quarter for a 20-7 lead before Juwan Foggie picked up a mishandled punt snap and scored from 3 yards out for Charlotte (4-8, 3-5).

Johnson came on for UTSA and led two fourth-quarter touchdown drives, passing 20 yards to Marquez McNair for a score, and Jalen Rhodes capping a 77-yard drive with a 2-yard TD run.

Thomas finished with a school-record 145 yards receiving. Sturm threw for 286 yards and Johnson 128.

Jager Gardner had a 14-yard touchdown run for Temple late in the fourth quarter.

Gardner Minshew threw a 13-yard touchdown pass to Jimmy Williams in the first quarter for East Carolina (3-9, 1-7). It was the first score against the Owls in their last 10 quarters.