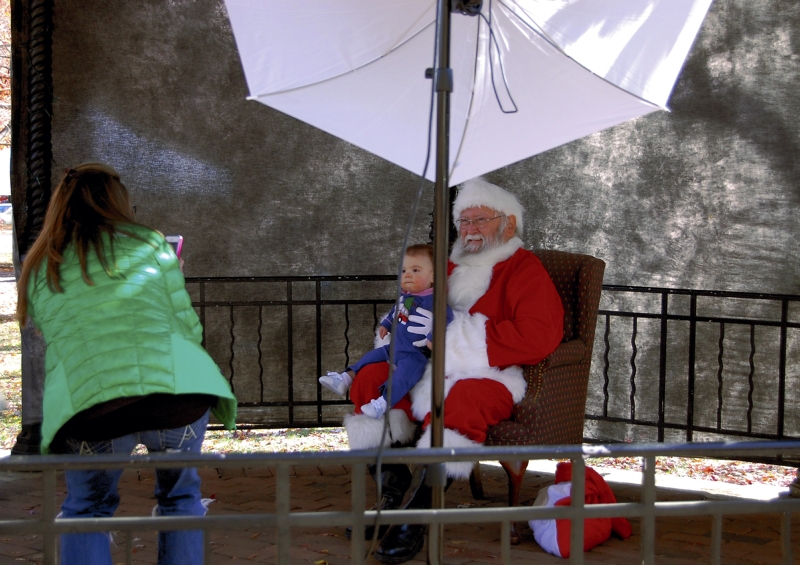 Amanda Raymond/Salisbury Post Allison Dunkin snaps a quick picture of her son Ben with Santa Claus during a Downtown Salisbury, Inc. event on Saturday. This will be Ben's first Christmas.

SALISBURY – Allison and Matt Dunkin brought their infant son Ben to take a picture with Santa Claus at the Bell Tower on Saturday.

This year will be Ben’s first Christmas and his parents said the holidays now have new meaning.

“We get to re-experience everything through his eyes,” Matt said.

Dozens of families waited in line to get their free pictures with Santa during Downtown Salisbury, Inc.’s event on Saturday. Free hot cocoa helped keep people warm on the chilly but sunny day.

While children waited to pass on their wish lists to Santa, they could also take pictures with the Grinch dressed in Santa’s classic hat and coat.

Allison Dunkin said Ben will probably get some bath toys for Christmas this year, along with teething toys since he just started teething.

Some of the older children wanted things that were a little more expensive.

Amanda Bowman traveled from Lexington with her family to bring her children to visit Santa.

She said she got a lot of her Christmas shopping done during Black Friday.

While daughter Kamryn wants dolls for Christmas, son Matthew wants an Xbox One.

Cyndi Greenwood came to the event with her daughter Jessica and grandchildren Jenna and Dominic. She said her oldest grandchild wants a dirt bike for Christmas. Jenna likes American Girl Dolls and Dominic said he wanted an iPod.

Greenwood said she has been attending the event for at least 12 years. She enjoys the downtown event because it is less commercialized than a mall Santa.

“It’s just more family-oriented to me,” she said.

Matt Dunkin said he didn’t feel rushed to get through their picture as quickly as possible.

“They sort of make it a little more personal,” he said.

After pictures, some families took carriage rides around the block or walked around the downtown area to enjoy Small Business Saturday.