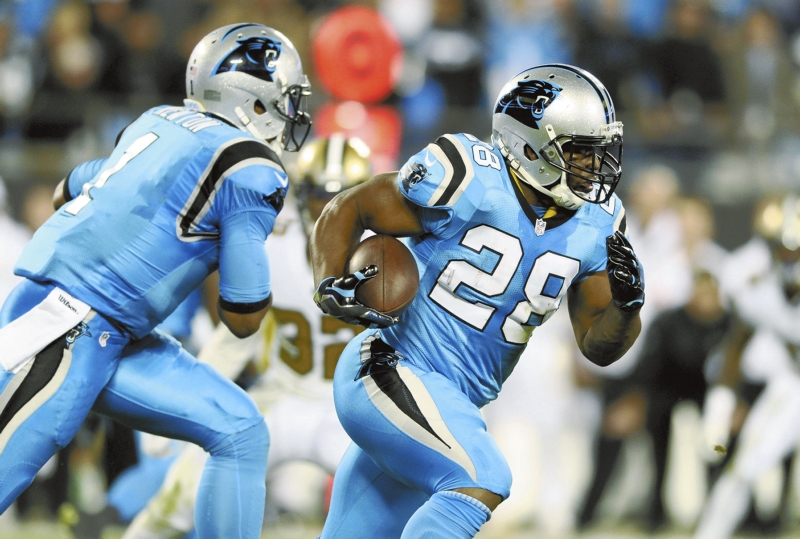 AP Photo/Mike McCarn, File ... In this photo from Nov. 17, Carolina Panthers’ Jonathan Stewart (28) runs against the New Orleans Saints during their game in Charlotte. At left is quarterback Cam Newton. The Panthers are at Oakland today at 4:25 p.m. The Panthers are looking for ways to establish the running game, so expect a full dose of Stewart early in the game.

OAKLAND, Calif. — The Raiders have emerged as the talk of football, holding the top seed in the conference with a quarterback who’s a serious candidate for MVP.

Hey, that sounds like the Carolina Panthers of last year.

Two teams on potentially divergent paths meet Sunday at the Coliseum, with the Raiders (8-2) looking to stay atop their division and conference while the defending NFC champion Panthers are hoping to stay alive in the playoff race.

A year ago at this time Carolina was undefeated and quarterback Cam Newton was on his way to winning the MVP. This year the Panthers are 4-6.

Does that give the Raiders greater appreciation for where they are?

“We’re definitely thankful,” said Raiders quarterback Derek Carr. “Any time through 10 games, you have eight wins, anybody in the NFL should be thankful for that. This is the week to do it. It’s nice to be thankful for those things and be happy about it, but at the same time, it’s not going to mean anything if we don’t win another one.”

A win Sunday would give the Raiders their first five-game winning streak since 2002, the last time they reached the Super Bowl or even the playoffs or even had a winning record.

They have incentive as well as proper respect for the Panthers.

“Absolutely still a very talented team,” Raiders linebacker Malcolm Smith. “They’ve got a lot of weapons. They’ve been extremely productive in the past. They’ve just caught some rough breaks. Those guys are still very capable of being a great team.”

In fact, since starting 1-5, the Panthers have won three of their past four games. The one loss should have been a win, but the Panthers coughed up a 17-0 lead and lost 20-17 to Kansas City. The Chiefs scored their final 17 points in the fourth quarter.

With a muddled division — all four NFC South teams are within two games of each other — Carolina hasn’t folded the tent, although its West Coast trip to play the Raiders and the Seattle Seahawks could decide the Panthers’ fate.

“I think when you’re down to 1-5 and you’re kind of saying, ‘Well, we’ve got to win out, we’ve got to win out,’ and you look at the whole schedule, things can kind of become blurred,” Panthers safety Kurt Coleman said this week. “But we’ve been able to refocus and refine our week-to-week mentality. And it’s been a great approach because we’ve been 3-1 and we should have won against Kansas City.”

The Panthers have an advantage in terms of rest, with nine full days off since playing a Thursday night home game against New Orleans on Nov. 17. The Raiders are coming off a Monday night game in Mexico City. They weren’t back in Oakland until 5 a.m. Tuesday.

Raiders coach Jack Del Rio isn’t allowing that to be used as an excuse.

“I think we’re done with all that,” Del Rio said of recovering from the trip. “We had a good week of practice, good preparation.”

That preparation includes getting ready for Newton, who remains dangerous despite a down year. Newton is completing a career-low 56.5 percent of his passes and has a career-worst 80.9 passer rating. He’s also on pace to throw for the fewest touchdowns of his career and post the worst rushing numbers of his six NFL seasons.

That’s not what All-Pro defensive end Khalil Mack sees when he watches Newton.

“Championship-quality player,” Mack said, “and it’s going to be a great challenge going against him and his offense.”

“Great athlete. Big arm,” said Irvin, who sacked Newton twice in a regular-season game last year with Seattle. “If you don’t rush him right he’ll take off and make you pay. He can do it all, pretty much.”

Raiders inside linebacker Smith said the key is to “just try to be physical when you can.”

“All of a sudden it’s 11 on 11 now instead of 10 on 11 when those plays break,” Smith added. “Somebody’s got to beat somebody and get there and get to him. Whether that happens up front or on the back end, you’ve just got to keep an eye on him.”

So while there are many ways Carolina hasn’t measured up to last year — the lack of a dominant run game being the biggest — the Raiders aren’t relaxing.

“We’ve got make sure we’re on point right now,” Raiders left tackle Donald Penn said. “They’re still in the thick of things in their (division) and it’s going to be a meaningful game for them, just like it is for us.”

With playoffs at stake, Ohio State beats Michigan in…