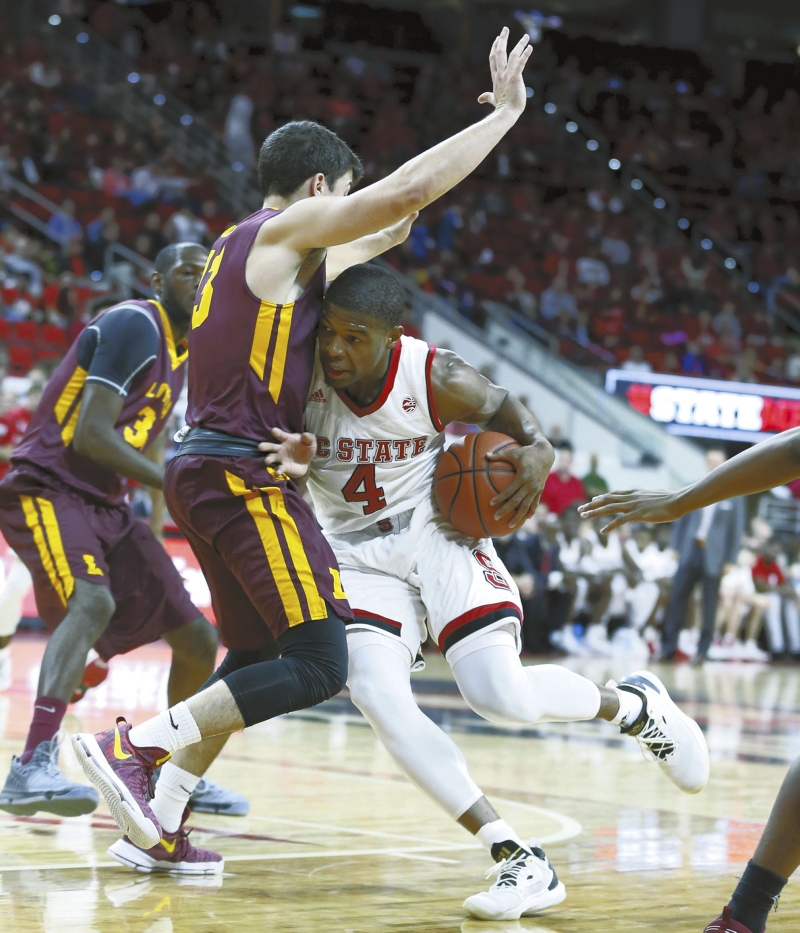 RALEIGH (AP) — Dennis Smith Jr. is back to playing like himself. Still, he looked like someone else to the opposing coach.

Smith, a freshman point guard, made 13 of 22 shots from the floor and added seven assists. He opened the season a combined 6 of 22 in the first two games.

“I’m much more comfortable,” Smith said. “I’m still finding my way, just like everybody else. We’re going to get a lot better.”

Smith provided a steal and layup, assisted on a dunk by Abu and made two free throws to keep his team in front.

“Dennis Smith was phenomenal,” Loyola coach Porter Moser said. “He was like (Russell) Westbrook the way he was that quick and that athletic. . I mean, he’s all that and more than advertised.”

Terry Henderson scored 19 points for the Wolfpack, who missed the front end of two one-and-ones in the final 7 seconds.

Markell Johnson stole the ball from Loyola’s Milton Doyle after the first, and Cameron Satterwhite’s heave from just beyond halfcourt missed after the second.

Aundre Jackson scored 20 points to lead Loyola (5-2), which led by as many as 11 points in the first half.

Ben Richardson had 16 points for the Ramblers, who made 10 of 17 3-point attempts.

Doyle had 12 points and Clayton Custer had 11 for Loyola.

Smith showed his outstanding leaping ability early in the second half. Johnson missed a layup in transition, and Smith rebounded and dunked the ball in one motion to give the Wolfpack a 55-52 lead.

N.C. State plays at Illinois on Tuesday night in the ACC/Big Ten Challenge.

DAVIDSON (AP) — Jordan Watkins scored 22 points and made 6 of 8 3-pointers, Will Magarity had 12 points and a career-high 10 rebounds, and Davidson broke away early to beat cross-county rival Charlotte 79-57 on Saturday for the Hornets’ Nest Trophy.

Jon Axel Gudmundsson’s layup sparked a 29-4 run for a 28-8 lead while the 49ers went nearly nine minutes without scoring a field goal. Will Magarity’s 3-pointer with 57 seconds left put Davidson up 43-28 at halftime and the Wildcats held the 49ers to 27.3 percent shooting from the floor and 12.5 percent (1 of 8) from long distance.

Peyton Aldridge capped the 11-2 run Davidson (4-1) used to open the second half and the Wildcats led by 30 points on Watkins’ jumper with 10:50 to play.

Virginia (6-0) entered the game leading the nation in scoring defense, giving up only 39.2 points per game. Providence (4-2) topped the season-high 51 that UNC Greensboro scored against the Cavaliers, but had trouble penetrating the tight defense that denies post touches and forces contested jumpers.

CINCINNATI (AP) — J.P. Macura scored 18 points, and Xavier’s defense dug in during a dominant first half.

Xavier (6-0) completely controlled a rematch of teams playing for the second time in six days. The Musketeers beat Northern Iowa 67-59 for championship of Tire Pros Invitational in Orlando last Sunday.

The Musketeers looked very comfortable in their second go-round against the Panthers (3-2). Northern Iowa had trouble finding open shots while Xavier raced ahead 30-10, going 4 of 13 from the field with seven turnovers. The Musketeers led 35-12 at halftime — the fewest points they had allowed in any half for 34 years.