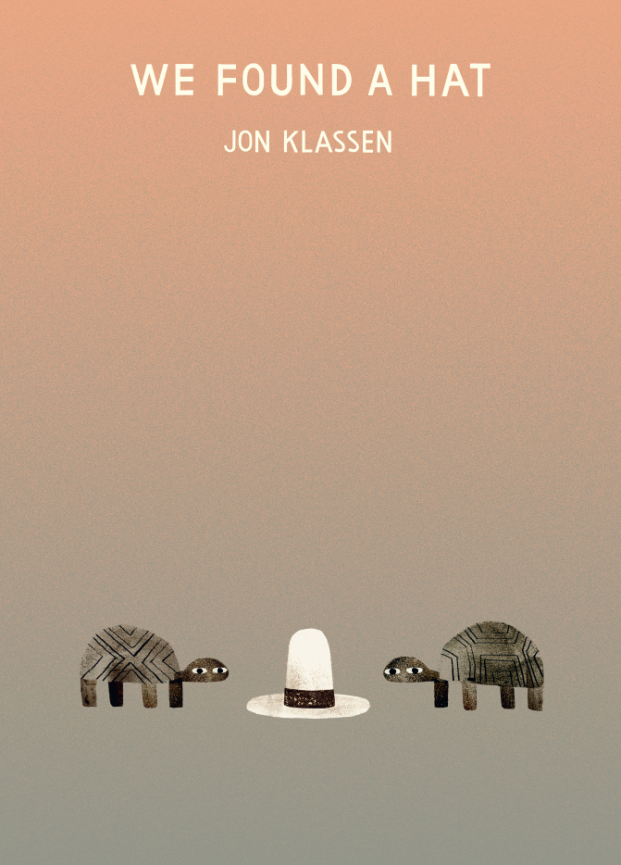 Jon Klassen “We Found a Hat"

LOS ANGELES — When children’s book author and illustrator Jon Klassen visits schools to read his new book, “We Found a Hat,” he also likes to read “The Green Ribbon” from a collection of scary children’s stories by Alvin Schwartz titled “In a Dark, Dark Room.”
The story is about a girl named Jenny who won’t reveal to her husband why she wears a green ribbon around her neck until she is on her deathbed. She unties the ribbon and …

“Jenny’s head falls off. I just love it so much,” said Klassen during a recent tour of his art studio in a tidy loft in downtown Los Angeles. “I love ending the whole presentation with that because it’s such a mic drop of a story.”

Only that week at Ivanhoe Elementary School in the tony Silver Lake neighborhood, the tale had not gone over too well with “the kinder set.”
“They were really bummed out. They had this ‘There’s-a-lady’s-head-on-the-floor’ kind of look,” said Klassen before brightening up and adding: “But it plays really well in the Midwest.”

Klassen was recently in the heartland as part of his “We Found a Hat” book tour. The book, the third in a series of books about animals who have lethal attachments to their jaunty chapeaus, was released in early October and leaped onto bestseller lists.

Klassen, 34, is a bit of a rock star in the picture book world, which is way more complicated than the average 80-word book might suggest. There are professional readers and educators who analyze these books with the rigor that an oenophile might employ when sniffing a rare bottle of Bordeaux. The consensus is that Klassen is special because he doesn’t shy away from the dark stuff of life. (That also explains why the two posters on the wall in his studio are of “The Shining” and the equally horrific 1978 children’s film, “Watership Down.”)

The Ontario, Canada, native won the Caldecott Medal for his 2013 book, “This Is Not My Hat,” which tells the story of a small fish that blithely steals a hat from a big fish and is convinced he will get away with it until a crab sells him out and the big fish eats him.

Or at least that’s what appears to happen. The hallmark of Klassen’s work is what is not shown but rather left to the imagination. His fictional universe, like the universe small children occupy, is a morally ambiguous one.

The Caldecott Medal is kind of like the Oscar for the picture book world. When you win you even get a phone call at 5 a.m. just like you would if you were an Academy Award nominee.

When Klassen got the call he said you could have knocked him over with a feather, and not just because it was so early. Klassen thinks he’s just a guy in a baseball cap with questionable narrative skills who can draw a decent picture. He got into children’s books after a stint working in animation at DreamWorks on blockbuster kids’ fare like “Kung Fu Panda.” He thinks he got really lucky that people seem to like what he does.

Not so, said JoAnn Jonas, the secretary of the Children’s Reading Alliance and a member of the Caldecott Committee that awarded the medal to Klassen.

“His books are very open to interpretation, and I think it’s that involvement that the audience loves,” said Jonas, explaining that Klassen possesses a high level of visual literacy. “The narrator is telling one story and the pictures are telling the reader another story.”
Before he tried his hand at writing he worked solely as an illustrator, something he still enjoys doing from time to time. He illustrated two books for McSweeney’s alum and children’s book author Mac Barnett, the first of which, “Extra Yarn,” was a 2012 Caldecott Medal Honor Book; the pair have a third collaboration coming out next year called “The Triangle.” Klassen also drew the pictures for Lemony Snicket’s “The Dark” in 2013 and illustrated 2016’s “Pax” by Sara Pennypacker, which was longlisted for the National Book Award in young adult literature.

But the “Hat” books seem to have captured the zeitgeist of modern parenting. There are more than 1.6million copies of the first two “Hat” books in print worldwide. “This Is Not My Hat” is a sequel to 2011’s “I Want My Hat Back,” in which a bear eats a rabbit that has taken his hat.

“We Found a Hat” complicates this basic theme by introducing a friendship with high stakes. Two turtles find a hat that they both want. One plots to steal the hat while the other is sleeping. Only a dream that they both have a hat prevents the theft. What happens in the morning is anybody’s guess.

Klassen is a master of “the page-turn,” said Lisa von Drasek, curator of the Children’s Literature Research Collection at the University of Minnesota. This is a technical term used by mavens like Von Drasek, who is on this year’s Caldecott committee, when discussing the drama of a picture book.

“If you engage a group of children, or a child at bedtime, as we anticipate the page-turn we take a breath,” she said. “We want to know what will happen next. Every sentence is a cliff hanger.”

As a child Klassen would clamber up on the bed in his grandparents’ room and lose himself in his father’s childhood books from the 1950s and ‘60s. He had a deep affection for them. He loved the simple language and the clean design. He loved the feel and smell of them.

He was particularly attracted to older works like Ludwig Bemelmans’ “Madeline” series. He was thrilled by P.D. Eastman’s “Go Dog. Go!” And he adored Arnold Lobel’s “Frog and Toad” parables.

Maurice Sendak, however, scared him.

“His books are beautiful and totally perfect, but ‘Where the Wild Things Are’ was so heavy that you could tell he was working out some big things in that book,” Klassen said. “As a kid you can’t enunciate why this feels too heavy, but you know this guy is really taking it seriously, and you should take it seriously too.”

Jonas said Klassen is tuned into the emotional reality of children.

“Little kids are exposed to all sorts of moral dilemmas,” she said. “This is a guy who is not afraid to tackle those big issues with them.”

The best way to do that, said Klassen, is with a solid visual premise. Words aren’t within the jurisdiction of very young children. Their territory lies with the pictures. The trick is to allow kids to suss out the reality of a given situation via the illustrations.

“It’s not just more information,” said Klassen of moments like one in “We Found a Hat,” when one turtle says he is thinking of nothing while his eyes are fixed covetously on the hat he wants to steal. “It’s actually the true story. You are empowered by these pictures.”

Which is exactly why Klassen’s work is so effective, said Von Drasek. His books “surprise and delight” on repeated readings. If you’re the person sharing a book with five kindergarten classes in a row and it’s still a joy by the fifth class, then that’s a “tremendous accomplishment.”
So why the hat? How does that banal motif accomplish these lofty goals? Because hats aren’t necessary, said Klassen. If a character wanted his money back or his food back or something consequential along those lines, then the thievery would be justified. A hat is superfluous but sentimental. In these books the hats don’t even really fit the animals who want them.

“That doesn’t matter, it’s beside the point,” said Klassen. “Kids books should have a visual premise to solve. At the end of these books somebody better be wearing a hat.”
———
©2016 Los Angeles Times
Visit the Los Angeles Times at www.latimes.com
Distributed by Tribune Content Agency, LLC.

November is the month to honor Native Americans

By Abigail Hardison Rowan Public Library This is a busy time for many of us. Leaves need raking, food needs... read more