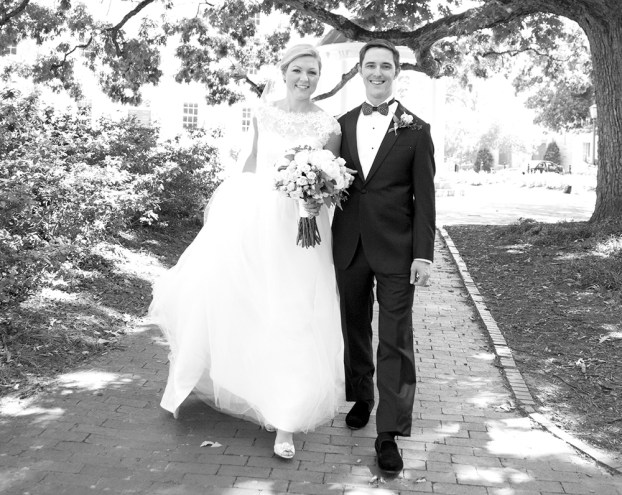 The bride is the daughter of Mr. and Mrs. Michael Stephan Bauk of Salisbury, the granddaughter of Mrs. Stephan Bauk of Rockville, Md., and the late Mr. Bauk. She is also the granddaughter of the late Mr. and Mrs. Lewis A. Peeler of Salisbury. A 2004 graduate of Salisbury High School, Kathryn graduated with highest honors from the University of North Carolina at Chapel Hill in 2008 with a Bachelor of Science degree in nursing. She earned her Masters of Science in Nursing in 2011. She is a pediatric nurse practitioner at Boston Children’s Hospital, currently pursuing a Doctorate of Nursing Practice from Duke University.

The groom is the son of Ms. Marilyn Bray Campbell of Charlotte and Dr. and Mrs. J. William Campbell of Greensboro. He is the grandson of the late Mr. and Mrs. Bernard John Bray of Indianapolis, Ind., and the late Mr. and Mrs. Oren Densel Campbell of Pine Grove, W.Va.  A 2002 graduate of Providence Day School, Adam graduated magna cum laude from Vanderbilt University in 2006 with a Bachelor of Arts in Communication Studies. He earned his Doctor of Medicine from the University of North Carolina at Chapel Hill in 2011. He is currently a Rhinology Fellow at Massachusetts Eye and Ear Infirmary in affiliation with Harvard Medical School.

Following a honeymoon at Primland Resort in Meadows of Dan, Va., the couple are making their home in Boston, Mass.