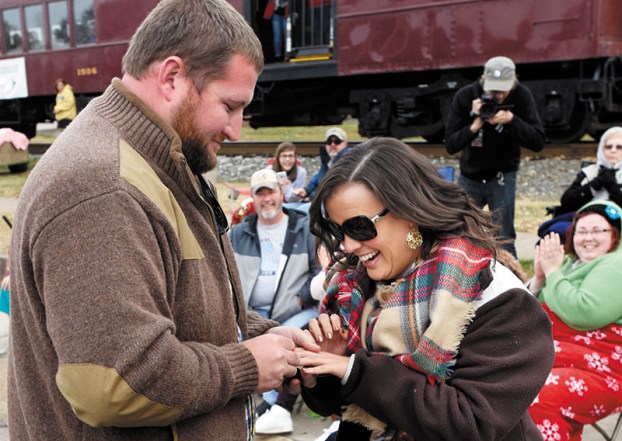 Chris Roseman proposed to Drew Morris there in front of the parade watchers and Drew said yes. photo by Wayne Hinshaw, for the Salisbury Post

SPENCER — Thanksgiving is a time for warmth and family — it’s one reason that Chris Roseman, 30, and Drew Morris, 31, chose it as a time to start their own. The two briefly halted traffic during Wednesday’s Holiday Caravan parade after Roseman used a float to propose.

“It was a special moment,” Roseman said.

When Roseman gave the signal, students riding on the West Rowan Future Farmers of America float held up a banner that said, “Drew Morris will you marry me?” while he hopped out of truck in front.

Morris said that at first, she didn’t see the banner — she just saw Roseman. He’d told her he was working, and would be late. Roseman is the owner and operator of Roseman Real Estate and Construction. He said Morris seemed disappointed, but understanding. When he showed up at the parade, she, and her family, were completely surprised.

“I just thought, ‘Oh, he just hitched a ride…’” She said. The float’s driver, Matt Owens, is a friend of Roseman’s.

But then he got down on one knee, while onlookers cheered and Morris’s family set cameras rolling. Morris said she was speechless, shaking and happy.

The two have been together for two years and eight months — to the day on the day of the parade. Roseman said he chose it because he knew it would be a good way to surprise Morris, and because he knew she’d be surrounded by her family.

The parade holds a special place in the heart of the Morris family. Morris’s grandfather, Floyd Burton, helped start the holiday parade in Spencer, and served as the event’s grand marshal in 2013.

“We go to the Christmas parade as a family every year,” she said.

As the years have passed, that family grew larger and larger. Last year, Roseman attended with them. And her grandfather was one of the few people in on the proposal — Roseman asked him if Burton knew of a float he could ride on. After several dead ends, Roseman remembered Owens.

“It went as smooth as could be. I couldn’t have asked it to go any better,” he said.

Roseman and Morris met nearly three years ago when Roseman was out one night with friends. Roseman said he loves that Morris is kind-hearted, passionate about family and willing to help anyone. Morris said Roseman is thoughtful and thinks of others before himself.

Morris said that while she and Roseman had discussed the possibility of getting married, the proposal during the parade was “the last thing she ever expected.” But she knows it will make a happy memory.

By Rebecca Rider rebecca.rider@salisburypost.com SALISBURY — There are a few days a year where I’ve always found it prudent to stay... read more