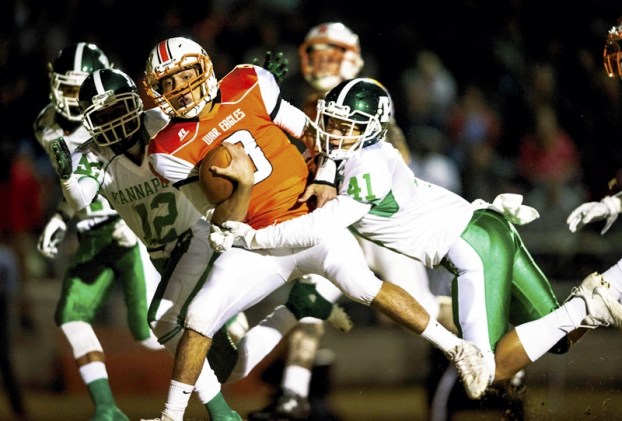 MOCKSVILLE —The end of the argument — if there really ever was one — came swiftly Friday night.

Davie County needed less than five minutes to show visiting A.L. Brown who was boss in its 38-19, second-round victory in the 4A state playoffs.

“I’m very disappointed for this group of seniors,” losing coach Mike Newsome said after Brown (9-4) excused itself from the postseason table. “Most of these guys have given us tremendous effort for four years. It’s not the speech you want to have (to give), not the speech you prepare for.”

Perhaps, but it’s a speech Newsome could have started preparing in the first quarter. Things went wrong in a hurry for the Wonders, who lost to Davie (12-1) for the first time in school history and had a three-game winning streak halted. On the third play from scrimmage, quarterback Zac Williamson and a ballcarrier botched an exchange, creating the first of three Kannapolis turnovers. This one left the War Eagles a short field to navigate for the game’s first touchdown.

“It was a read play,” Williamson said after passing for 175 yards and scrambling for another 92. “I was trying to keep the ball and he was trying to take it from me. It was a miscommunication — and my fault.”

Davie went ahead 8-0 before the game was a minute old on the first of two Chris Reynolds-to-Cooper Wall TD connections, a 20-yard slant across the middle.

“We got put in some bad situations,” strong safety Cinsere Allison said. “But that’s something we’ve been in all year. This was a team that depended on its defense to get out of jams. It just didn’t go our way tonight.”

It didn’t go well moments later when Davie stretched its lead to 15-0 on its second possession. The hosts marched 67 yards in less than two minutes, with Reynolds completing passes to Tyler Roberts and Mason Wilson before scampering 18 yards to the Brown 4-yard line. Two snaps later Davie had a two-touchdown cushion. “It happens,” was all Newsome would say.

By the middle of the second period — with Davie ahead 25-0 and was threatening to run away and hide — the Wonders finally showed a pulse. The got on the board on a broken play — a snap that came before anyone was looking — that Williamson turned into a 51-yard TD sprint down the left side.

“Going through my mind, I looked to see if anyone was open,” he explained. “Then I just took off and made something out of nothing.”

Two minutes later the Wonders drew within 25-13 when Williamson spotted sophomore Nick Lyerly unattended on the right side and spiraled a 30-yard touchdown pass. “We figured out an offense,” Newsome said. “We finally found a personnel group that was going to work well against how they were playing us.”

The backbreaker came with 1:11 remaining in the half. Victimized by consecutive 15-yard penalties — one for roughing the passer and another for pass interference — Brown surrendered a late touchdown that gave Davie an insurmountable halftime lead.

“I thought they scored on our mistakes,” senior linebacker Steven Howie said. “It wasn’t so much how good Davie County was tonight. It was how bad we played.”

They played better in the second half, limiting Davie to a couple of Jared Griggs field goals and scoring a too-late-to-matter TD when defensive tackle Elijah Hall returned a fumble 19 yards for a fourth-quarter score. But in the end, it was apparent Davie had played this one like a prizefighter — slowly, methodically entrapping the Wonders until they threw up their arms and surrendered. Let the record show that A.L. Brown went down, but it went down standing up.

“With the injuries we had and the adversity we had to fight through, it was great to see these guys make it to this point,” Newsome said afterward. “When you lose your starting quarterback the first game of the season, lose your starting running back the third game of the season and lose two middle linebackers going into the playoffs — the kids could have put their heads down and said we don’t have a chance. But they never did that. They fought all the way through.”