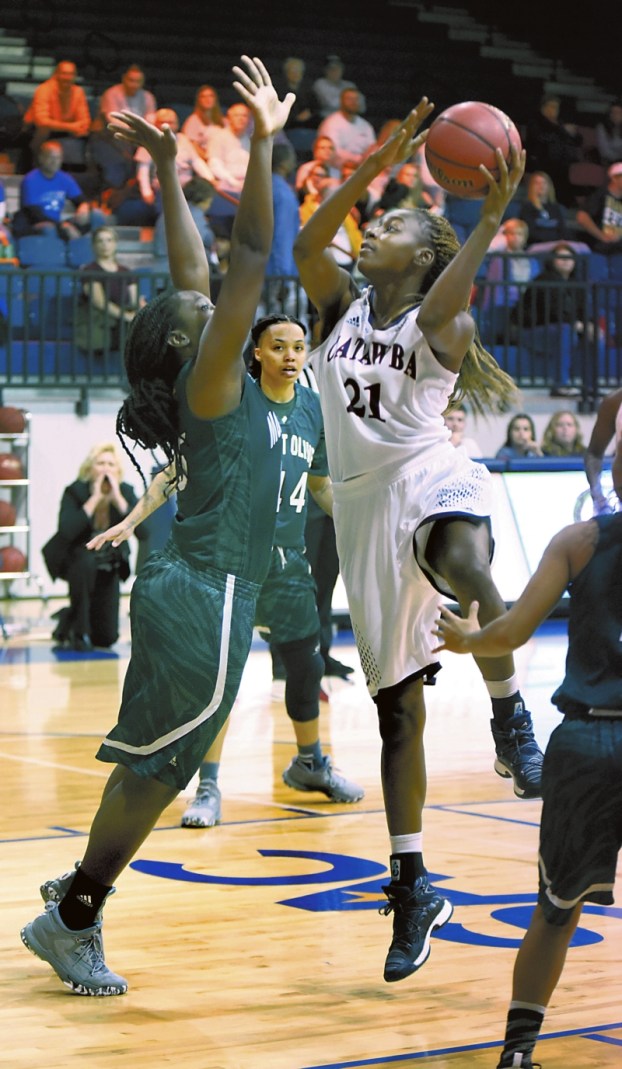 SALISBURY — For Catawba’s women’s basketball team, 30 disastrous seconds at the end of the third quarter swung a potential upset into the nice-try category.
Catawba lost to ninth-ranked Virginia Union, 78-69, on Saturday afternoon at Goodman Gym. The visiting Panthers, 28-3 last season and 4-0 this season, had superior size and speed, but the Indians played more zone defense than usual and stayed with a human express train that was ranked third in D-II scoring with 98 points per game.
“Catawba played with a lot of competitive fire,” Virginia Union coach AnnMarie Gilbert said. “They were confident and we don’t like teams that play us to have any reason to be confident.”
Catawba (4-2) got 21 points from Terri Rogers and 11 from Bri Johnson, but Virginia Union countered with five players in double figures. Lady Walker, the CIAA’s top post player at an agile 6-foot-2, had 17 points and 12 boards. Her tag-team partner, Alexis Johnson, a springy 6-footer, had 16 points and soared for 21 rebounds.
“We want to dominate the paint and dominate the glass with our strong inside players,” Gilbert said. “In our game before Catawba we actually scored 66 points in the paint. But Catawba had a good plan. They packed it in tight and tried to make us shoot from outside.”
Johnson got Catawba started with two early 3-pointers, and when Lizzie Webb and Rogers made the last two buckets of the first quarter the Indians held a 19-16 advantage.
Rogers, a 5-11 junior started slow, extra-careful not to foul because she provides most of Catawba’s height and most of its inside game. She sat down for several minutes after missing a layup and committing a foul.
“I missed my first couple of shots and I did get a little down,” Rogers said. “But I knew I had to pick it up. Then I started to realize I could score against them.”
Johnson cooled off, but Rogers ended the first half with two sweet, run-the-floor buckets, snagging tough passes from Johnson and Marshauna Butler and finishing to put Catawba on top, 36-34.
“We had taken the momentum,” Rogers said. “We had a lot of energy.”
Catawba did a lot of things right in the first half and had led by as many as seven points, but it was a chore keeping relentless Virginia Union off the glass. The Panthers held a 14-3 edge on offensive boards at the break. That was the focus of Catawba coach Angie Morton’s halftime speech.
“Defensively we were doing a really nice job of slowing them down and we were doing better as far as limiting our turnovers,” Morton said. “But they were just killing us on the boards.”
Jayda Luckie (17 points) got the first points of the second half for Virginia Union to tie the game. For the next seven minutes, it was either tied or Catawba trailed, but the Indians’ deficit was never more than three points.
Rogers was starting to confidently knock down foul-line jumpers, and she buried one with 50 seconds left that cut Virginia Union’s lead to 51-50. When Virginia Union missed a 3-point try with 31 seconds left in the third quarter, Catawba rebounded and had a chance to grab the lead, but then everything fell apart.
VU’s Kishona Sutton got a steal and an easy layup, and the lead was 53-50. Then Catawba turned it over again with a handful of seconds left in the quarter and VU pushed the ball the other way. Just past half-court, VU’s Brittany Jackson went airborne, trying to draw contact and a foul, and the ball squirted away from her. It bounced straight to Walker, who collected it, and calmly knocked down a back-breaking 3-pointer as the horn sounded. Catawba was down six.
“It all happened so fast,” Rogers said. “Those were a tough 30 seconds, but we should have responded better.”
Catawba never recovered from Walker’s unexpected 3-pointer. The Indians got the first bucket of the fourth quarter from Butler to get back within four, but after that Virginia Union pulled away steadily and led by as many as a dozen points.
“We lack some maturity at times and the way the third quarter ended really hurt us,” Morton said. “We missed a lot of bunny shots today, and Virginia Union is No. 9 for a reason. That’s a very patient, disciplined team, and they wouldn’t take bad shots. They took their time and got the ball to the people they wanted to get it to.”
Virginia Union shot 16-for-27 (nearly 60 percent) in the second half.
Virginia Union no longer has D-II Player of the Year Kiana Johnson, who averaged 29.3 points per game for the Panthers during last season’s run to the Elite Eight, but they still have Walker and a lot of talent.
“Walker is our leader and we’ll see how far she can take us,” Gilbert said. “This game will help us. Catawba’s No. 21 (Rogers) is a really nice player, and this was a wonderful matchup for so early in the season.”

By Mike London mike.london@salisburypost.com MOUNT ULLA — Crest punched in a meaningless touchdown with 1:14 left, but that didn’t diminish... read more