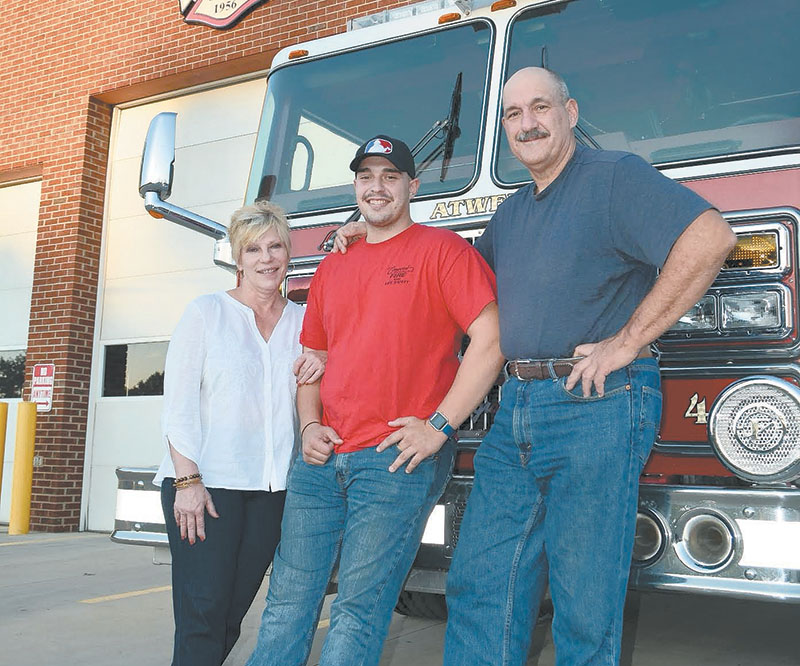 Bubba McLaughlin with his mom, Robin, and his dad, Gary, outside of Atwell Fire Department, where Gary served as chief.

Bubba McLaughlin comes from a family of helpers. His mother and sister are both nurses. His father is the retired chief at Atwell Fire Department, and his brother is a firefighter.

Bubba was even born on 9/11 — the universal call sign for help, which became more significant after 2001. So it made perfect sense that Bubba, 23, would follow in his father’s footsteps. He started rookie school Aug. 15 at Concord Fire Department.

But at 7 a.m. on Sept. 21, Bubba collapsed during a training run. His firefighting brethren immediately surrounded him. Using CPR and an AED —an automated external defibrillator — they brought him back to life.

“They originally thought he had a seizure,” says Bubba’s dad, Gary. “They called us and said he was on the way to the hospital.”

Bubba’s mom, Robin, was at work in South Carolina when she called Bubba’s cellphone and someone else answered.

“I thought, this is not going to be good,” says Robin, a nursing supervisor for nuclear plants with Duke Energy.

Bubba’s family converged at Carolinas Medical Center NorthEast, where Bubba’s sister, Mandy Lanning, works as a nurse. She and her husband, Brad, are the parents of Lily, 3, and Olivia, due in December.

“They put us in a family waiting area,” Mandy says. “As a nurse, I knew it was not good.”

Bubba’s older brother, firefighter Ryan Yost, and his wife, Christy, an EMT, soon arrived. So did the Concord fire chief.

What the cardiologist said shocked them all. Bubba had gone into cardiac arrest, but his heart function was good. He’d had some tests — more were scheduled — and was in ICU on “code cool” for 24 hours to let his body rest and decrease swelling.

“I could think of all the reasons he’d be in ICU, and that wasn’t one,” Gary says.

The diagnosis made no sense to Bubba’s family.

“We thought it might have been a tear in his heart, or an anomaly, or a congenital defect,” Mandy says.

“I played sports my whole life,” says Bubba, who played football in high school and college.

“He’s as healthy as a horse,” Robin says.

“And as strong as a horse,” says his uncle, Johnny McLaughlin.

Meanwhile, friends and family poured in.

“I bet there were at least 100 people in and out that first day,” Gary says.

After several hours, Bubba’s family was taken to his room.

“I knew what I was expecting to see,” Mandy says, “but it’s hard to see someone you know. His color looked good, but seeing him intubated was a shocker.”

“I can’t even describe what I felt,” Gary says.

“Every day, I had a new favorite nurse,” Gary says.

After six days in ICU, Bubba went to his sister’s floor, the cardiac care floor.

Once awake, he began asking what had happened. He wasn’t sore from the CPR, he said, but a week had already passed since the incident.

“I remember they did CPR, and I watched them,” Bubba says. “The first thing I thought when I woke up was, I’m missing rookie school.”

His stay in ICU had been eventful, his dad says. “He was up and down, most of it from medication.”

“I told him he needed to get off the roller coaster, because I was getting tired,” Gary says.

“For Bubba to come out of this completely unscathed is a miracle,” Robin says.

“If he hadn’t been at Concord Fire Department,” Gary says, “he wouldn’t be talking to you. They knew what to do, and they did it.”

Fire Chief Ray Allen arrived at the department just after Bubba collapsed. Every new recruit goes through an academy, and Bubba was part of the class that started in August.

“When I arrived, I was not terribly alarmed,” Allen says. “But as soon as I saw him, I immediately realized this was not a typical seizure. He was not recovering and, in fact, was getting worse. You never think you’re going to be doing CPR on someone Bubba’s age.”

But the instructors were also EMS personnel, and immediately went to work, Allen says. “They were doing what they needed to do. That was the longest nine minutes of my life. They used the AED three times, and they did regain a pulse. There was no gap in the time Bubba collapsed that he began receiving care. It was fortunate, too, that we had so many people right there. The key to CPR is proper compressions, and it can be very tiring. At least four people shared in doing compressions on Bubba.”

If it had to happen, Allen says, Bubba was in the perfect place.

Now, Allen is awaiting a decision by human resources as to whether Bubba can return to the fire department.

“No matter what, we’re always going to be open to any scenario to bring him back, even if it is not immediate,” he says. “He was going to be really, really good for us. He was always in a good mood, and he was always motivated for the day. He was working very hard, and was very motivated.

“The waiting is hardest on him.”

Doctors had no explanation as to why this happened, but decided to implant a cardiac defibrillator, as an extra insurance policy that it would not happen again.

A meeting with the cardiologist Oct. 20 left him with no medical restrictions. His body is still healing from the experience.

“I do whatever I want, and quit when it hurts,” says Bubba, who began driving again late last month.

Since that appointment, Bubba has been awaiting a decision from the Concord Fire Department as to whether he can return to work.

“We believe all prayers will be answered,” Robin says. “Whatever God’s calling him to do, He’ll lead us. If he can’t be the firefighter he’s always dreamed of being, he can be the man God wants him to be.”

“We can’t be mad because we have so much to be thankful for,” Gary says.

Bubba grew up with his dad being the chief at Atwell.

“It always appealed to me,” he says, “but I thought football was the way to go. I played in college, but I didn’t like it. I was miserable. When I came home, I put in my application at the fire department.

“Not being there has been absolutely terrible. I’m not gonna lie to you. We all like helping people.”

But Bubba has gotten numerous calls and texts from friends and family who are supporting him during this period of waiting.

“A fireman’s a fireman,” he says, “no matter where you’re a fireman.”

Still, he says, “I’m selfish. I’ve worked extremely hard to be a firefighter. It’s scary. I’m terrified about what’s going to happen. But what’s meant to be will happen.”