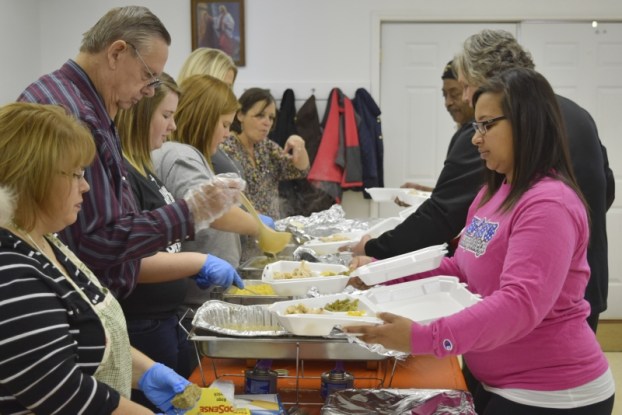 Volunteers at Providence Baptist Church fill up plates with a free meal on Thanskgiving day. The meal has been church tradition for several years. Rebeca Rider/Salisbury Post

‘We’ve got to be that light:’ Church provides meals on Thanksgiving

EAST SPENCER — The day is warm and bright when Rev. Jason Brown pulls up to East Spencer’s fire and police station. He hands off two Thanksgiving meals to Officer B. Seagraves and then walks up a damp sidewalk to the fire station. As he greets the on-duty firefighters, he stops to count.

“Do you need us to bring more meals?” he asks.

Brown and fellow church members Josh and Joe Parker brought three meals for the fire station, but there are five people there at work hosing down the bright red trucks. Brown agrees to swing by later with extra food, and the group pauses to pray — giving thanks for the food and asking for protection.

Brown serves as East Spencer’s town and fire chaplain, but he’s also the assistant minister at Providence Baptist Church in East Spencer, which has been providing free Thanksgiving meals to residents and those in need for more than eight years.

The Thanksgiving meal is something the church has been planning and preparing for since October, and Thursday it finally came to fruition. The church turned out with more than 30 volunteers, as well as volunteers from Salisbury and from Yadkin Baptist Church, to cook and serve nearly 250 meals, said meal coordinator Sam Adams.

Most of those meals, Adams said, are delivered by church members to those in need. The meal has become church tradition, but this year there are some new partnerships. It’s the first year the church has provided meals for fire and police, Adams said in an earlier interview. It’s also the first year the church has partnered with the town of East Spencer to find those who may be in need of a meal.

Brown and the Parkers also delivered nearly 40 meals to the Love Christian Center in East Spencer, an outreach program that has been running its own Thanksgiving Meal for about 15 years, church elder Edith Downs said. This year, Downs said the center estimates it will provide 150 free meals to those in need.

While most of Providence Baptist’s deliveries will be in Spencer, East Spencer and Salisbury, Adams said the church ventures into all corners of the county, going as far as Rockwell. This year, they even have a delivery in Lexington.

During lunchtime, Providence opens its doors to anyone — whether they don’t have a home, or don’t feel like cooking. Meals are often delivered to those who don’t have family or lack transportation. Delivery drivers have even been known to pull over when they see someone walking down the road to offer them a meal.

“It’s where it gets real,” Brown said of the ministry. “People are hurtin’, people need help.”

The church attracts a variety of people looking for a good meal, as well as a variety of volunteers. Marla Lowery, a church member, said she’s become known as the “turkey lady” to those she delivers meals to.

“You get more hugs than anything,” she said.

John and Judy Wilson don’t attend Providence, but started volunteering with the church four years ago to teach granddaughter, Brenna, about the importance of Thanksgiving.

“It teachers her about sharing and giving to others,” Judy said.

Brenna is now 10, and Judy said she looks forward to it every year.

For Josh Parker, it’s a way to give back — to his community, and in thanks for all he feels his faith has given him.

Parker and son Joe have been helping deliver meals for about eight years. Parker’s wife, Mary, has been a lifetime member of the church, and parker said that Providence Baptist accepted him, and the local community has helped him prosper.

For Parker, “charity starts at home.”

“There’s so many people in our own backyard who need help…so you’ve got to reach out to everyone,” he said.

Family and friends brought together to watch Holiday Caravan

By Amanda Raymond amanda.raymond@salisburypost.com SALISBURY — Mamie Fleming went to this year’s Holiday Caravan with her two daughters. She has... read more