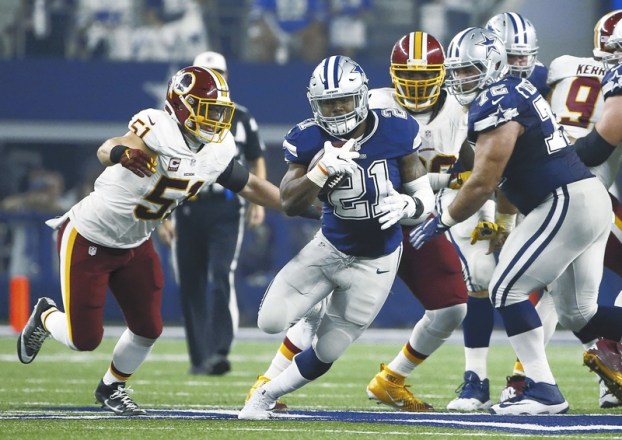 Dallas Cowboys running back Ezekiel Elliott (21) runs for a first down through a gap provided by Cowboys' Travis Frederick (72) as Washington Redskins inside linebacker Will Compton (51) pursues in the second half of an NFL football game, Thursday, Nov. 24, 2016, in Arlington, Texas. (AP Photo/Ron Jenkins)

Prescott accounted for two touchdowns, Elliott ran for a pair of scores and the Cowboys extended their franchise regular-season record with a 10th straight victory, beating the Redskins 31-26 on Thursday.

Prescott tied Don Meredith’s club quarterback record from 50 years ago with his fifth rushing TD and the NFL-leading Cowboys (10-1) won despite 449 yards passing and three touchdowns from Cousins, the first Redskins quarterback with two 400-yard games in a season.

“Over and over and over again, at critical moments, he came up with a big play, whether it was a third down, down in the red zone, again and again and again he just played winning football for us,” Dallas coach Jason Garrett said about Prescott. “He did the things that winning quarterbacks do.”

The Redskins (6-4-1) got swept by their NFC East rival, and the defending division champions fell 3 1/2 games behind Dallas with five games left. It was their seventh loss in eight tries on Thanksgiving against Cowboys, who had never won more than eight straight in the regular season.

“We’ve been in third place for a while, so we have to understand where we are what it’s going to take to get an opportunity to come back here in the future,” Washington coach Jay Gruden said. “The last five games of the year are critical.”

Elliott, the NFL rushing leader, had the fourth score on five straight second-half touchdown drives between the two teams with a 1-yard run for a 31-19 lead midway through the fourth quarter. The 21-year-old had 97 yards to give him 1,199 for the season.

After getting 43 yards on the first Dallas possession, Elliott had just 13 yards before a 21-yarder to start Dallas’ last TD drive. It was the second straight week he finished with 97 yards after some difficulty in the first half.

“Over time, you keep running the football, you’re going to wear them down,” Garrett said. “He made some big runs late that were critical. It really broke their back.”

The Cowboys had an eight-game streak with at least 400 yards snapped, finishing with 353. But Dallas answered with touchdowns each time the Redskins got within a score on Cousins’ passes of 5 yards to Jordan Reed and 67 yards to DeSean Jackson, who had 118 yards receiving.

After Cousins’ second scoring toss to Reed, an 8-yarder with 1:53 remaining, Dustin Hopkins’ onside kick went out of bounds. The Cowboys ran out the clock.

Reed had 10 catches for 95 yards after missing most of the first half when he injured his left shoulder leaping for a pass over his head in the end zone.

Cousins, who was 41 of 53 and finished 8 yards shy of his career high, took the Washington career lead with his third 400-yard game and became the first Redskins quarterback with consecutive 350-yard games since Jay Schroeder in 1986. He had 375 last week against Green Bay.

Prescott was 17 of 24 for 195 yards and one touchdown, a toe-tapper to Terrance Williams . He had eight carries for 39 yards, including a career-long 18-yarder. Dez Bryant led Dallas with 72 yards on five catches.

BACK TO THE PACK

Undrafted rookie running back Robert Kelley of the Redskins was held to 37 yards on 14 carries a week after getting a career-high 137 yards with three touchdowns against the Packers. He was averaging more than 100 yards per game the previous three.

The late-afternoon sun shining through the glass doors on the west side of the stadium was an issue in the opener when Dallas tight end Jason Witten admitted that the glare contributed to a pass he dropped in the New York Giants’ 20-19 win.

Cousins had to battle it during a second-quarter drive that ended in the second of Dustin Hopkins’ two missed field goals: a 55-yarder.

Prescott threw away from the sun to Williams for the touchdown on the subsequent possession, and the glare wasn’t a factor after that.

Los Angeles Clippers guard Chris Paul is a longtime Cowboys fans and brought the whole team to the game a night after a win over the Dallas Mavericks. Center DeAndre Jordan, a Houston native, is a Dallas fan also . Paul has visited the Cowboys at training camp in the LA area. The Clippers resume a six-game trip Friday in Detroit.

Redskins: Washington gets the 10-day break before the second of three straight road games in Arizona on Dec. 4.

Cowboys: It’ll be a “regular” seven-day week with a visit to Minnesota next Thursday. Then Dallas gets the longer break before a Dec. 11 visit to the New York Giants that is likely to be a battle of the top two teams in the division.

By Mike London mike.london@salisburypost.com Davie County was ranked 10th in 4A in the final media poll, but the War Eagles... read more