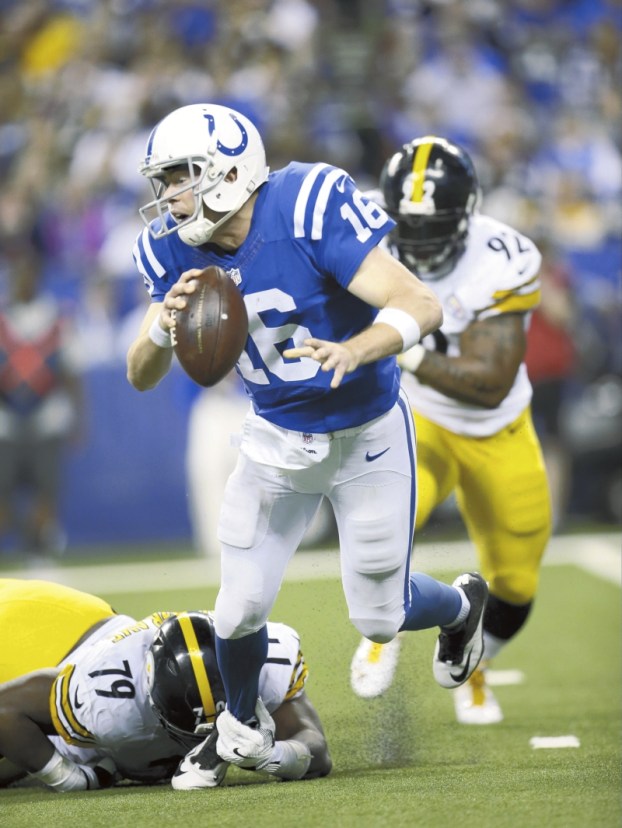 Luck-less Colts no match for Pittsburgh

INDIANAPOLIS (AP) — Ben Roethlisberger and Antonio Brown hooked up for three touchdowns Thursday night and the Pittsburgh Steelers’ defense shut down the Indianapolis Colts in a 28-7 victory.

The Steelers (6-5) helped their playoff chances with a second straight win and snapped a four-game losing streak on Thanksgiving.

Colts quarterback Andrew Luck sat out with a concussion, and his absence showed as Indy’s first winning streak of the season ended at two games. While his replacement, Scott Tolzien, hung tough most of the night, the performance wasn’t good enough to extend the Colts’ 10-game winning streak on Thursday nights.

The Steelers built a 21-7 lead by scoring touchdowns on each of their first three possessions — a 5-yard TD run from Le’Veon Bell, and touchdown catches by Brown of 25 and 33 yards.

Indy’s only score came on a 5-yard TD pass from Tolzien to Donte Moncrief early in the second quarter, a play set up by the first completion of Pat McAfee’s career on a fake punt.

The Colts had two chances to cut the deficit but Tolzien was stopped twice on third-down runs at the 1-yard line, and the Steelers forced incompletions on both fourth-down plays.

Pittsburgh sealed it with — what else? — a 22-yard TD pass from Roethlisberger to Brown with 5:30 left.

Tolzien finished 22 of 36 for 205 yards with one TD and two interceptions.

Colts greats Tony Dungy and Marvin Harrison received their Hall of Fame rings at halftime. Dungy was the coach of the 2006 Super Bowl championship team that celebrated its 10-year anniversary Sunday. Harrison is the team’s career leader in receptions, yards receiving and TDs and also played on the title team. Both were inducted into the Hall of Fame in August. “It’s one of those things you don’t even dream about when you’re young,” Dungy said.

“You dream about making it to the NFL and possibly winning a Super Bowl, but you never dream about these kinds of things and the Hall of Fame.”

Steelers: Will try to extend their winning streak to three Dec. 4 when the New York Giants visit.

Colts: Hope to have Luck back in the lineup when they visit the New York Jets on Dec. 5.

Carolina and State renew rivalry with eyes on even bigger goals