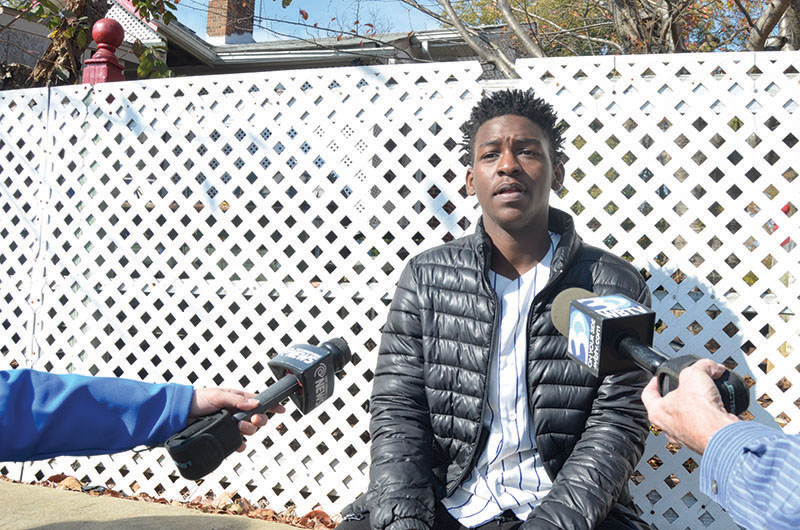 Tray Miller, 17, recalls how he and 14 friends were accidentally exposed to carbon monoxide. The group were playing cards at a Lloyd Street home when they moved a generator inside a garage, closed the door and went inside the house. Everyone eventually was checked out at the hospital. Shavonne Walker/Salisbury Post

SALISBURY — Tray Miller is thankful this holiday season to be alive because he was minutes from never seeing his family again. The 17-year-old was one of 15 people inside a Lloyd Street home Tuesday night that contained high levels of carbon monoxide.

Miller does not live at the home at 204 Lloyd St. where the incident occurred, but was there playing cards with some friends in the home. The home belongs to Dennis Wilks, owner of J.O. Wilks & Son, but he was not there in the beginning, he told a Post reporter.

The home did not have electricity and Miller and another friend placed a generator inside the garage, shut the door and returned back inside the house. The incident occurred just before 5 p.m.

Miller admitted it was a mistake and they “weren’t thinking.”

Carbon monoxide is odorless, tasteless and colorless. It can cause serious illness and even death. Carbon monoxide is found in fumes produced any time when fuel in cars or trucks, small engines, stoves, lanterns, grills, fireplaces, gas ranges, or furnaces is burned.

Miller said he was awakened from a nap by a friend. He immediately didn’t feel right, he described feeling dizzy, unsteady on his feet.

“I yawned and fell back. I hit my head on the table,” he said.

He said everyone rushed out of the house. A friend’s grandmother suggested he and everyone who was inside the house go to the hospital. A little while later, Miller found himself aboard a helicopter bound for Duke University Hospital in Durham.

Miller said all 15 of the people in the house found themselves in the hospital, many of them at Duke University Hospital. All have since been checked out and are fine.

“I really could’ve died. God was with me,” Miller said.

His advice to anyone thinking of bringing a generator or other similar machine inside — don’t.

“I wouldn’t want nobody to go through what I just went through,” he said.

Wilks said when he arrived home he was met with the Salisbury Fire Department who advised him to also get checked out at the hospital.

He is also thankful no one was more seriously hurt than they were.

Wilks said the teenagers didn’t know about bringing a generator inside. He called what happened an accident.