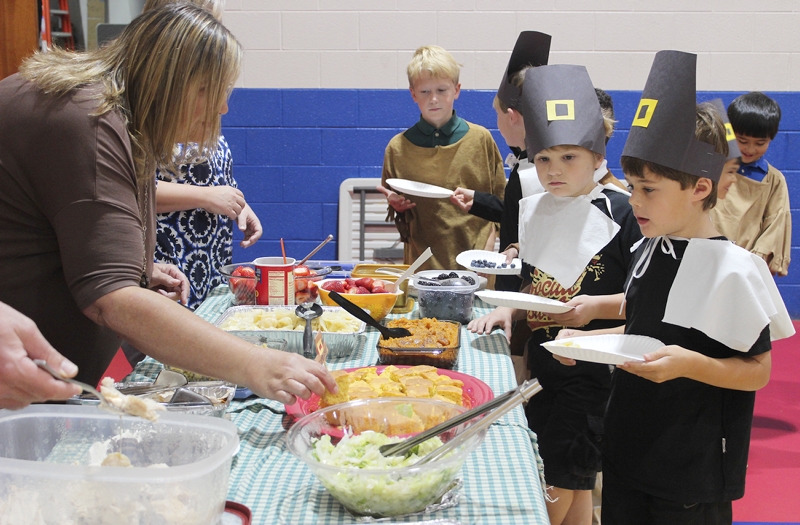 Submitted photo First grade Pilgrims (from right) Fletcher Busby and Newt HopkinsTeeter help themselves to a spread of natural foods, similar to those which would have been shared at the first Thanksgiving.

SALISBURY — Embracing the many historical and cultural elements of Thanksgiving, Salisbury Academy’s first- and third-graders come together each year as pilgrims and Native Americans to re-enact the first Thanksgiving.

The meal starts with a Thanksgiving blessing and includes simple, natural foods similar to the dishes the Native Americans and pilgrims might have eaten together. The feast is an exciting way to bring the first grade’s unit on the pilgrims – their journey and history – to life. And for the third graders, the feast serves as a memorable introduction to their lesson on the Native Americans.

Reflections on the feast from the first grade students:

“I had three plates of turkey because it was so yummy.” – Lola Metcalf.

“I got to sit with one of my third-grade friends. That was really cool.” – Loretta Van Geons.

“I really liked trying the deer meat. It was kind of chewy like bubble gum.” – Lucas Webb.

“My favorite food was the pumpkin. I’ve had pumpkin pie before, but this was different. I’ve never had it like that and it was good.” – Jillian Towns. Submitted photo The Pilgrims and Native Americans of Salisbury Academy’s first and third grades join together for a Thanksgiving blessing.