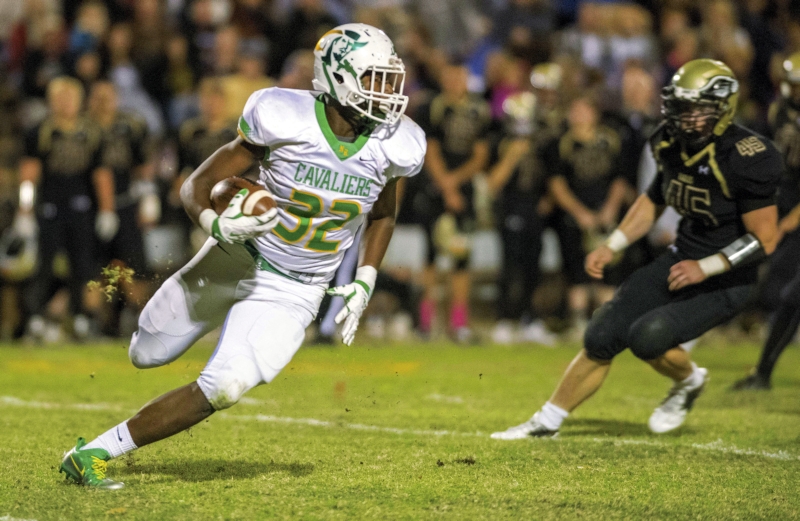 Davie County was ranked 10th in 4A in the final media poll, but the War Eagles (11-1) have ascended to the No. 1 ranking in the state according to MaxPreps.
Davie isn’t a well-known program statewide, and that probably helps explain the relatively low ranking by the state’s sportswriters. Davie isn’t outstanding every year, so voters in eastern cities such as Durham, Elizabeth City, Goldsboro, Jacksonville, Rocky Mount, Wilson and Wilmington can’t be blamed for being skeptical about what’s been happening in Mocksville, a rural town of about 5,000 people.
But MaxPreps isn’t concerned about who is and who isn’t a traditional power and is only focused on what the on-the-field results and numbers reveal. MaxPreps uses a formula that places considerable weight on strength of schedule as well as game scores, and Davie rates very well because of victories over a trio of stout Central Piedmont Conference opponents — West Forsyth, North Davidson and Mount Tabor — plus non-conference victories against Greensboro Page, West Rowan and North Rowan.
Six teams Davie beat are still alive after the first round of the state playoffs.
Davie’s lone setback came early to a strong Greensboro Dudley team on a night when star receiver Cooper Wall went down in the second quarter with injury and quarterback Chris Reynolds was hobbled by a sprained ankle.
Brian Simmons, a rankings guru for N.C. football, has his own system. He ranks Davie ninth in the state.
The interesting thing about the Simmons ratings is he ranks Davie’s schedule as the state’s 12th-toughest, while he rates tonight’s opponent, A.L. Brown, as having faced the 67th-toughest. A.L. Brown fans will raise both eyebrows at those numbers, as the Wonders play in a league — the MECKA — that is generally considered the league’s best and includes three other certified powerhouses in Mallard Creek, Vance and Hough. The Wonders also played against solid squads from Concord and Mooresville in non-conference action.
MaxPreps gives the MECKA its due, ranking Vance second in the state, right behind Davie, and Mallard Creek third. The Wonders are ranked 35th by MaxPreps, but it should be noted that A.L. Brown beat Vance.
The great thing about the prep football playoffs is that things are settled on the field, not by polls and rankings.
The Simmons power rating system gives the Wonders little to no chance tonight — 21-point underdogs, based on a power rating differential of 19. plus 2 more points going Davie’s way for home-field advantage.
But as good as the War Eagles are, I’m certain this game will much closer than that. I believe A.L. Brown’s defense can hold Davie in the 20s because they’ve held everyone, even Mallard Creek and Vance, in the 20s. I won’t be shocked if it comes down to a field goal by Davie’s Jared Griggs, who has a dozen — or by the Wonders’ Brian Gutierrez, who has four.
The second round of the playoffs is an exciting night, because everyone who’s still standing is a good team.
Davie, North Rowan and West Rowan all faced first-round opponents last week that were limited to running the ball on offense, but most of the one-dimensional teams have packed it up now.
North and West are run-first teams that also can throw efficiently. Tonight they’ll encounter equally stout opponents that can run or throw.
Davie is a passing team that can run, while A.L. Brown is a running team that can pass, so both of the stellar defenses involved in that game will have their work cut out.
The picks are 59-16 for the year after going 6-0 last week. The Wonders’ road win against Glenn wasn’t decided until the final play. Carson earned some respect by nearly upsetting Pisgah. Davie, North Rowan and West Rowan rolled. East lost at Crest, as expected, but put 40 on the scoreboard, which no one expected.
The picks could go 0-3 tonight. Based on the Simmons power ratings, Crest is slightly better than West, but playing in Mount Ulla makes that one a toss-up. Based on those same power ratings, North Rowan is a bit stronger than Brevard, but when you throw in a long road trip for the Cavaliers and some chillier weather in the mountains, that one becomes a toss-up as well.
•••
3A
(3) SHELBY CREST (9-3) at (2) WEST ROWAN (9-3)
First round: Crest outscored East Rowan, 60-40. West won against Freedom, 33-13.
History: Crest leads 2-0. The Chargers beat West, 19-7, in the first round in 2002 and by 28-7 in the second round in 2014.
MaxPreps state rankings: Crest 71st. West Rowan 60th.
HOME/ROAD: West is 6-1 at home. Crest is 4-1 on the road.
Streaks: Both teams lost their final game of the regular season.
Points scored: Crest 341, West 314.
Points allowed: Crest 169, West 209.
Players to watch: Linebacker L.J. Robinson, lineman Devin Turner and cornerback Deyquan Byrd (seven picks) lead West’s defense. Payne Stolsworth has thrown 20 TD passes. Jovon Quarles has rushed for 1,378 yards. In 10 games as a receiver, Kortez Weeks has 56 catches for 1,100 yards and 15 TDs. For his career, Weeks has 161 catches, second in county history to East’s Seth Wyrick (189).
For Crest, 6-foot-5, 255-pound outside linebacker Justin Foster is committed to Clemson and was chosen for the Shrine Bowl and the U.S. Army All-American Bowl.
DB DeQuondre Wilson was picked for the Shrine Bowl and has Division I offers.
Offensively, Crest racked up 650 yards against East Rowan last week, with QB Cam Peeler and receiver Tyshun Odom doing major damage. Odom, who has D-I offers, has 81 catches for 1,347 yards and 14 TDs.
Peeler is a highly mobile QB, and Tavian Brintley rushed for nearly 200 yards against East Rowan.
KEY: West has to win the line of scrimmage — run the ball and stop the run.
NEXT: at Hibriten or home vs. Burns.
PICK: Crest 24, West Rowan 20.

2A
(3) NORTH ROWAN (10-2) at (2) BREVARD (10-2)
First round: North Rowan thumped North Wilkes, 28-0. Brevard rallied past Carver, 28-14.
History: Brevard leads 3-0. Brevard beat the Cavaliers in playoff games in 1999 (61-33), 2005 (44-6) and 2007 (22-19).
MaxPreps state rankings: Brevard 89th. North Rowan 99th.
HOME/ROAD: North Rowan 4-2 road, Brevard 5-1 home
Streaks: Two hot teams. Brevard has won six straight. North has won seven in a row.
Points scored: Brevard 461, North 331.
Points allowed: North 151, Brevard 197.
Players to watch: North defensive end Zion DeBose is being recruited by a lot of D-I schools, including SEC schools. He has 16.5 sacks, 26.5 tackles for loss and 41 QB hurries. Steven Thurston anchors the defensive line. Linebacker Javin Goodine is a tackling machine. Running back Jaleel Webster has topped 1,000 yards for the season. Corbin Smith accounted for all four North TDs last week (3 passing, 1 rushing). He has 20 TD passes.
For Brevard, QB Tanner Ellennberger has thrown for 1,856 yards and 30 TDs. He’s also rushed for 605 yards. Tanner Pettit is a 1,000-yard rusher.
Carver stopped Brevard’s passing game last week, but Pettit had three rushing TDs.
KEY: North will try to stop the run and force Brevard to the air. That will leave it up to DeBose and his friends to bring the pressure.
WORTH NOTING: Brevard is a good team, but North has played a much tougher schedule. Brevard lost a game to Madison, a 64-7 loser in the first round of the playoffs.
NEXT: at Reidsville or home vs. Mountain Heritage
PICK: North Rowan 21, Brevard 14.

4A
(5) A.L. BROWN (9-3) at (1) DAVIE (11-1)
First round: A.L. Brown won at Glenn, 37-29. Davie took care of Southeast Guilford, 42-14.
History: A.L. Brown leads 5-0. The Wonders won the last playoff meeting, 25-0, in 1984. That was a team that finished as state runner-up. The schools played late-season games when they were both in the CPC from 1985-88. The Wonders won those, 28-13, 35-7, 28-7 and 31-13. That 1988 meeting is significant in Wonder history as it was the last game coached by Bob Boswell, who got the program rolling.
MaxPreps state rankings: Davie 1st, A.L. Brown 35th.
HOME/ROAD: Davie 6-1 at home, Wonders 5-2 on the road
Streaks: Davie has won nine straight, while the Wonders have won their last three.
Points scored: Davie 399, A.L. Brown 370.
Points allowed: Davie 166, A.l. Brown 190.
Players to watch: Davie QB Chris Reynolds is 5-foot-11, which limits recruiting interest, but he’s a phenomenal high school QB. He’s a dangerous runner and he’s thrown 25 TD passes in 10 games. Cooper Wall, a 6-foot-2 junior receiver, has 55 catches for 863 yards and 13 TDs, while basically playing nine games. Peyton Hampton (689 rushing yards) and Adrian Cranfill (614) lead the ground game. Linebacker James Boyle (473 career tackles) will break the school career record with his first stop of the night. Linebacker Cody Hendrix has 163 tackles this season.
For the Wonders, Zac Williamson had to take over as the starting QB after an injury on opening night and he’s done an admirable job. He had his strongest aerial game last week against Glenn with nearly 200 yards. Jahia Mahatha has 10 TDs and heads a running back committee. Defense is the Wonders’ strength. Standout linebacker Sherard Sutton was hurt last week, but linemen Elijah Hall and Najee Williams, DB Cinsere Allison and linebacker Steven Howie are studs.
KEY: A.L. Brown’s defensive quickness could cause Davie some problems. If the Wonders can move the ball on offense and put up 21 or so, they’ve got a chance for the upset.
NEXT: vs. Watauga or Dudley
PICK: Davie County 24, A.L. Brown 21.