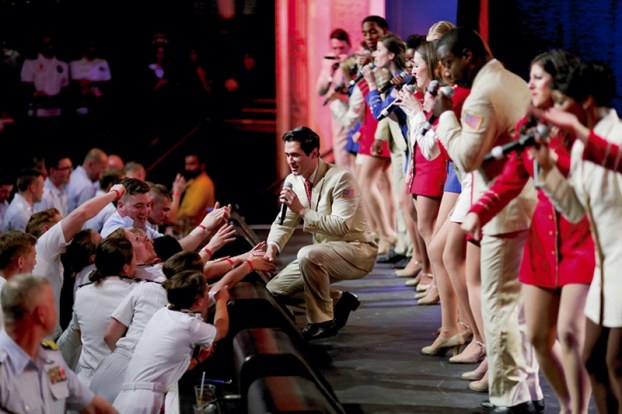 One show only — The USO Show Troupe performs in Concord

One show only — USO Show Troupe at The Davis

CONCORD — Merriment will fill the Davis Theatre Dec. 5 at 7:30 p.m. when the USO Show Troupe comes to Concord for a one-show only performance.

Made up of professional performers with Broadway, Off-Broadway, film and television credits, and musical arrangements produced in collaboration with Grammy, Emmy and Tony writers and arrangers, the USO Troupe Holiday Show will entertain audiences with a repertoire of holiday and Broadway songs, along with retro hits from World War II and the Vietnam War eras, covering everything from Big Band to Disco.

Tickets are $15, with a portion of the proceeds going to the USO of North Carolina. to support crucial programs that assist soldiers and their families.

The USO Show Troupe began in 1941, giving 400,000 performances during the World War II era. The list of celebrities who traveled overseas to entertain U.S. troops back then reads like a who’s who among the Golden Age of the Hollywood elite – Marlene Dietrich, Rita Hayworth, the Marx Brothers, Marilyn Monroe and of course, Bob Hope, the USO’s most prolific entertainer.

During the Vietnam War, stars like John Wayne, Sammy Davis Jr. and Lola Falana took their places on the barebones makeshift stages, far from the glamour of their Hollywood sets.

The USO of North Carolina serves around 650,000 active and reserve troops in the state each year, through comfort centers that offer movie lounges, libraries and computer stations, and through support services and programs that assist the emotional, psychological and financial wellbeing of troops and their families.

Gold Hill Lighting of the Fall Fires event is Saturday

By Vivian Hopkins GOLD HILL — Each year on the Saturday before Thanksgiving the quaint little town of Gold Hill,... read more