Spurs stay perfect on road with 119-114 win over Hornets 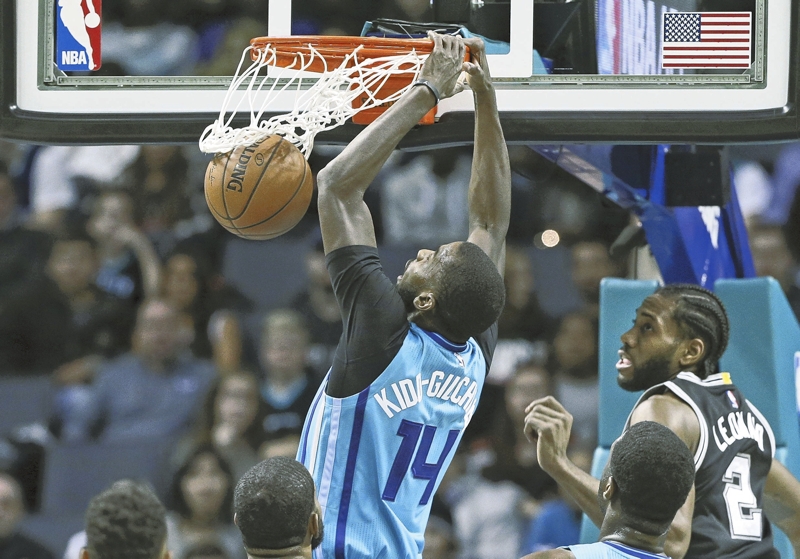 By STEVE REED,  AP Sports Writer
CHARLOTTE, N.C. (AP) — Kawhi Leonard scored 30 points and the San Antonio Spurs beat the Charlotte Hornets 119-114 on Wednesday night for their seventh straight victory.LaMarcus Aldridge added 23 points and seven rebounds, and Danny Green had 16 points as the Spurs improved to 8-0 on the road.

Kemba Walker led the Hornets with 26 points, nine rebounds and seven assists. Frank Kaminsky had 13 points and eight rebounds off the bench, but the Hornets lost their third straight game after starting the season 8-3.

The teams entered the fourth quarter tied at 84 in a tightly contested game that included 28 lead changes in the first three quarters.

Aldridge gave the Spurs the lead for good with 2:53 left on a pair of free throws. Green knocked down a 3-point after an extra pass from Tony Parker and Leonard then hit a baseline jumper to push the lead to 108-102.

The Hornets would battle back and pull within 112-111 with 50 seconds remaining when Walker converted a 4-point play and then scored on drive to the basket.

But Aldridge’s free throw and a 3-pointer from the left corner by Parker pushed the Spurs’ lead to five with 22 seconds left. Parker iced the game with four free throws in the final 10.2 seconds.

Spurs: Aldridge has scored in double digits in all 15 games this season. … Leonard came into the game with the top spot in NBA history for best winning percentage in his first 300 starts (235-65). … The Spurs entered the game leading the NBA in 3-point shooting percentage and free throw shooting percentage. They shot 41.9 percent (13 of 31) form 3-point range and 90 percent (18 of 20) from the foul line.

Hornets: Jeremy Lamb was active after missing the last 10 games with a hamstring injury. He played only six minutes. … Cody Zeller missed his third straight game with a shoulder injury, but coach Steve Clifford said there is a chance he could return to action this week. … Hornets owner Michael Jordan tipped his cap to the crowd after the scoreboard showed a highlight of the former NBA star receiving the Presidential Medal of Honor from Barack Obama on Tuesday in Washington, D.C.

Spurs: The Spurs return to action Friday night when they travel to face the Boston Celtics.

Hornets: Charlotte will head to Madison Square Garden for a Friday night game against the New York Knicks.