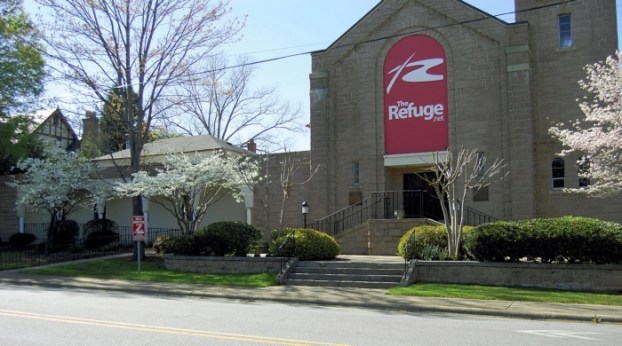 The Abbey, a wedding venue, is seeking a change to its zoning overlay to allow church services to continue. Amanda Raymond/Salisbury Post

Planners OK amendment to ordinance for The Abbey

SALISBURY — The Salisbury Planning Board voted Tuesday to recommend approval for religious institutions to be excluded from the hours of operation at The Abbey.

The Abbey is a wedding venue at 128 N. Fulton St., the previous location for Sacred Heart Catholic Church.

The case to rezone the property was controversial; residents opposed having the wedding venue in the neighborhood for fear of problems with noise, parking and other issues.

The rezoning was eventually approved by City Council.

Lori and Michael Diefenbach, who closed on the property on Oct. 31, asked for an amendment Tuesday to The Abbey’s conditional district overlay that would exempt religious institutions from operating-hour restrictions on the venue.

That would allow The Refuge, which has been holding services at the old church, to continue to do so.

The wedding venue’s operating hours are from 8 a.m. to 10 p.m. from Sunday to Saturday.

Preston Mitchell, planning and development services manager, said the request was based on the hours of the support services building.

While religious institutions would not have to adhere to the hours of operation, the wedding venue would still be held to the hours agreed upon.

Mitchell said he thought The Refuge, a church leasing space on the property, would move out of the property when the sale was closed, so staff did not account for religious institutions using the site outside of the hours of operations.

The change would accommodate The Refuge’s Wednesday night service, which is held from 6:30 to 8: 30 p.m.

“(The Refuge is) in there past six and so we’ve received complaints that the Diefenbachs are not holding up their end of the bargain on this conditional district rezoning,” Mitchell said.

During the public hearing, Lori Diefenbach said The Refuge was looking at another location but the deal did not work out. The Refuge now has a two-year lease under the Diefenbachs.

“When we initially were putting the property under contract as a wedding venue, one of the statements that we had made … was that it was our intent to continue to offer the property for use as a religious institution, as weddings only typically happen Saturday evenings,” Diefenbach said.

Billy Rollins, campus pastor, said the church was able to expand its children’s ministry to the support services building since leasing under the Diefenbachs. The Wednesday night event starts with 30 minutes in the parking lot where the kids can play games and socialize.

Rollins also said attendees do not use Ellis Street, the street close to residents, to enter or exit the building.

Fred Schmidt, who spoke in opposition of the amendment, cautioned the board about allowing the change.

“What I’ve heard, and this is just from hearsay, is that there’s a noise issue going on,” he said.

Rollins said he plays music using a speaker while the children are outside. He did receive an email from a resident about the noise.

Mitchell said The Abbey would not qualify as a religious institution based on the ordinance’s definition.

He also pointed out that if The Refuge held a wedding, that wedding would still fall into the religious institution category and not be subjected to the hours of operation.

Josh Canup made the motion for the recommendation of approval because he said The Refuge has already been operating on the property for five years.

“…The fact that this property hasn’t ceased to operate in the way of being a religious institution, which have services, which have nightly programs that run later … I feel like if it had ceased for a couple years or something like that, then it would be a little bit more complicated,” he said.

The Diefenbachs also asked that the overlay be clarified to allow consultations are to occur outside of the hours of operation.

The board recommended to the City Council approval of the change and clarification.

• Recommended the rezoning of properties at the 500 block of Grove Street and the 1000 block of Holmes Street.

• Moved the discussion about additional use standards to the next meeting.

By Amanda Raymond amanda.raymond@salisburypost.com SALISBURY — The Holiday Caravan is back for its 57th year with more than 130 entries... read more