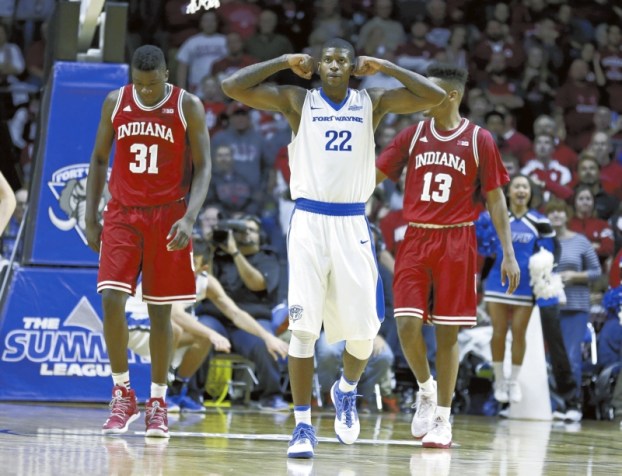 No. 3 Indiana stunned by IP-Fort Wayne

FORT WAYNE, Ind. (AP) — Bryson Scott scored 18 points and John Konchar made the go-ahead free throw with 1:19 left in overtime to give IPFW a stunning 71-68 upset over No. 3 Indiana on Tuesday night.

DeAngelo Stewart made two free throws with 2.9 seconds left to make it a three-point lead, and Konchar picked off the ensuing inbounds pass to seal the biggest win in school history.

Konchar had 15 points and 11 rebounds.

The Mastodons (3-2), who made the move to Division I in 2001-02, had lost all nine previous games against ranked teams and hadn’t even played a Top 25 opponent in nearly four years. But on their home court, with crimson-and-cream clad fans all around, IPFW pulled off the biggest stunner of this early college basketball season in style. The Mastodons trailed for only 90 seconds.

Indiana (3-1) was led by Thomas Bryant with 18 points and Robert Johnson with 16.

CHARLOTTESVILLE, Va. (AP) — Freshman guard Kyle Guy scored 20 points in 13 minutes, and No. 7 Virginia ran off 26 consecutive points to end the first half of a 90-34 victory against Grambling State on Tuesday night.

Guy, who was Mr. Basketball in Indiana last season, shot 6 of 7 from the floor, including 5 of 6 from 3-point range, for the Cavaliers (4-0). Virginia coach Tony Bennett removed him with 10:51 remaining and started substituting with walk-ons very early.

Oregon (3-2) shot poorly in a loss to Georgetown in its Maui opener and continued to struggle on Day 2. The Ducks shot 34 percent, including 5 of 17 from 3-point range, and had 21 turnovers.

The Badgers (4-1) went 5 for 22 from 3-point range, but made up for it by outscoring the Hoyas 38-16 in the paint. Wisconsin also had a 50-21 rebounding advantage and scored 19 second-chance points on 20 offensive boards.

Tyler Lydon had 14 points and 10 rebounds, one of three players who finished with a double-double for the Orange (4-0). He was 4 of 5 from 3-point range.

Cunningham — who finished with 18 points — hit a jumper with 58 seconds left in the extra session to give South Carolina Upstate (3-2) a 100-98 lead it never seized.

The Spartans made all 10 of their free throws in the final 28 seconds with Cunningham hitting six. Ramel Thompkins added a career-best 22 points for the Spartans.

Moore buried another 3 with 25 seconds left in regulation to tie it at 89. The 49ers’ Jon Davis was unable to convert his layup attempt with two seconds left.