The life of the party: Carrol Fisher’s family celebrates his life two days after grandson’s wedding 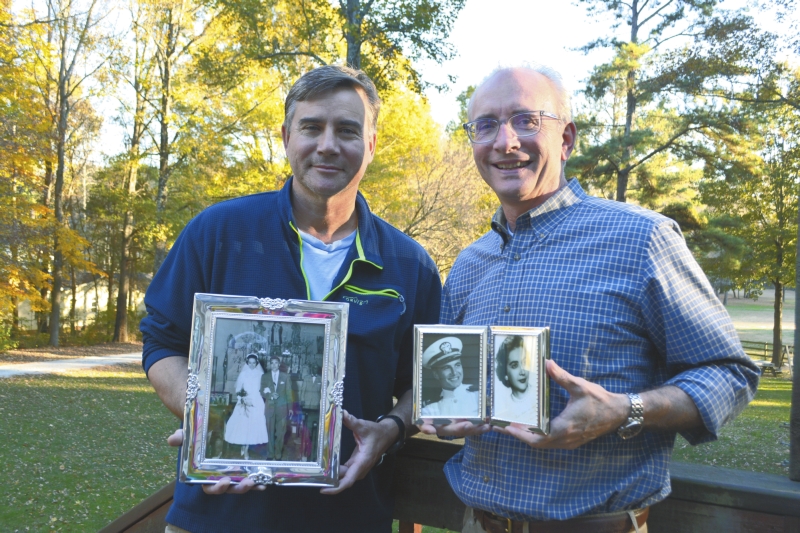 Carrol Fisher was always the life of the party. He loved to dance — he had both knees replaced, twice. He so badly wanted to attend the wedding of his oldest grandson, Ben, on Nov. 12.

His family believes he did.

Carrol, the father of four children and grandfather of 12, died Nov. 9. His family celebrated his life on Nov. 14, two days after Ben and Baylee’s wedding. “Pops,” his family says, was in charge to the end — and maybe a little bit beyond that.

“Everyone was here for the wedding,” says Carrol’s oldest son, Luke, and father to Ben. “They just changed airline tickets and pushed everything out to celebrate a wedding and Pops’ life.”

Luke’s parents, Carrol and Sonia, married at 5 in the morning in her native Cuba in October 1957. Because it was so hot there, Luke says, that’s when weddings took place.

They’d met four years before. During World War II, he’d flown Corsairs off the U.S.S. Roosevelt. After the war, he flew a radar plane, patrolling the coasts of Cuba and America for Russian subs. One afternoon, he got bored. There was nothing in the water, and Carrol knew there was an officers’ party that night at Guantanamo Bay. He had his dress whites with him. He bugged his commanding officer enough ’til he got the answer he wanted: “All right. C’mon.”

Sonia Trutie had been to dinner that night with a submarine captain — on the sub — but he was called out to duty, so she took a boat back to the officers’ club. Sonia came up one set of steps, Carrol came up the other.

“They saw each other from across the room,” says Diane, Luke’s wife.

“Then for the next four or five years he was just basically chasing her,” Luke says. “He’d fly to Cuba to see her whenever he could. He knew she lived in Oriente, he just didn’t know where. He called her ‘Senorita Mas Alta,’ the Tallest Girl, because she was 5 feet 11. People told him, ‘That must be Don Julio’s daughter.’”

He found Sonia, and they started writing. The first time he asked her to marry him, Luke says, she said no. When they married, Carrol was 34 and Sonia was 27.

“The revolution was coming,” Luke says. “Her parents knew she needed to get out of the country.”

“She told me she always wanted to leave Cuba,” says Danny, Luke’s youngest brother and neighbor. “Her sister came to Wingate in the early 1950s and got a four-year degree.”

“She came for opportunity,” Luke says. “Pops promised her family she could come back to Cuba every other year. I was born in 1958, and she and I went in the summer of 1959.”

The 1990s were known as “the special period” in Cuba, Diane says. “Once the Russians pulled out, they were destitute.”

Luke’s family subsisted on rice and beans during their visit to his mother’s homeland.

“They had no medicine, no pharmaceuticals,” Luke says. “We left them everything we could take. It broke her heart. She said, ‘This is not my country.’”

After much begging on Sonia’s part, her family was allowed to visit her at the hotel. Luke’s cousins had never seen items on the buffet — cucumbers, tuna salad, olives, tomatoes.

“It was really eye-opening,” Luke says.

Unfortunately, Sonia fell one day by the pool. Luke was able to get her to a nearby hospital, which had no antibiotics, no numbing medicine to give her before they stitched up her face.

“She just sat there so bravely,” Luke says. “They thought she had a concussion, so I sat with her all night. We had to pay cash for her treatment, and we were down to our last dollars. But it was only $200.”

Carrol and Sonia married in 1957, and their son Luke came the next year, followed by Mark in 1960, Danny in 1962, and Mimi in 1964. Mark lives with his family in Virginia, and Mimi and her family live in Charlotte.

Each of the children had three children — six grandsons and six granddaughters. The grandchildren live all over the country: Texas, California, Virginia, Georgia, South Carolina, and Danny and Nan’s children, the youngest grandchildren, here in Salisbury.

“She provided stability for Pops,” Danny says. “He had a lot of energy, and she kept him between the ditches.”

After Carrol retired, he lived in England for two years, pursuing a PhD at Oxford. It took him 10 years, but he received his degree from Union Institute.

Danny and Luke trace their father’s decline to a fall on April 1, 2015. Then 92, Carrol was in his greenhouse, potting 380 tomato plants.

“It was absolutely pitiful,” Danny says. “His arm was broken in five pieces.”

Carrol’s friend, Braxton Young, himself in his mid-90s, had come to pick him up for lunch, and was in an absolute dither. Danny fetched a chair for Braxton, who simply sat there and rubbed Carrol’s back.

Danny tears up thinking about that morning.

Danny says that they’d already noticed their dad was having a few memory problems. “I think his world was becoming unraveled.”

Nan says Carrol talked with his anesthesiologist, Dr. Vaughn Nelson, and told him he was concerned about being put to sleep.

“Are you having memory issues?” the doctor asked him.

“Absolutely not!” Carrol said, and told him Danny’s phone number — off by just one digit.

“He never went home after that,” Nan says.

After Carrol went to rehab, a bed became available at the N.C. Veterans Home on the VA campus.

“We may have more time, Pops,” Luke said.

But Carrol had made his decision.

For the next 18 months, he only left the home twice — once to go to the dentist, once to get vitamins.

“He had congestive heart failure,” Luke says. “He just didn’t have any gas in the tank. But he always had to fight a battle.”

He had plenty of suggestions, Luke says, about how to improve veterans’ care.

Ben and Baylee planned to go see Carrol after their wedding ceremony and before their reception. But Carrol was moved to hospice on Nov. 8, where he died the next day.

There was no quit in Carrol Fisher, Luke says. “He didn’t know how to let go.”

“I happened to be with him,” Luke says. “I was holding him in bed, cradling him in my arms. I was telling him it was OK. Our pastor, Randy Kirby, walked in. We held hands and prayed, and that was it.”

Ben and Baylee’s wedding, Luke says, was a happy occasion. “There was a lot of dancing, and Pops loved to dance.”

“At the end,” Diane says, “it was so clear he was just frustrated he was stuck in that body. We like to think that Carrol and Sonia were together, dancing at the wedding.”