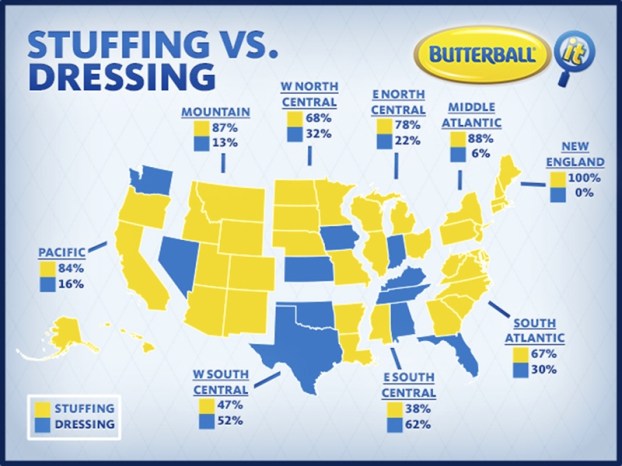 Butterball says we call the bready side dish that goes with turkey stuffing - but some of us have heard dressing more often.

Stuffing or dressing? Just pass it down For many people, their Thanksgiving tradition begins with this bag. It’s up to the cook what gets added, from onions and celery to cranberries and nuts.

Generally, stuffing goes inside the turkey. Dressing is cooked separately in another pan.

Butterball’s survey of stuffing vs. dressing shows our area of the South as using the term stuffing more frequently, but I’ve yet to meet a Southerner who stuffs a turkey with anything, be it cornbread or lemons or chestnuts.

It’s dressing, and it frequently contains things like hard-boiled eggs that seem a bit incongruous.

My Irish grandmother used stuffing, and for decades, it’s been the Pepperidge Farm Herb Seasoned Stuffing. We add chopped celery, jarred mushrooms and a little onion.

One year we tried the cornbread version and it didn’t go over too well.

Recently, my husband’s side of the family tried dressing with sausage and red peppers. It earned a few suspicious looks, but it tasted good — just not the same as the traditional dressing.

One person I know tries to make a new version of dressing/stuffing each year by adding chestnuts, or nuts or oysters. She said very few at her table even eat stuffing — all those waistlines to watch.

I say it’s not Thanksgiving without stuffing, mashed potatoes and plenty of gravy.

I just saw Trisha Yearwood’s Food Network show, where instead of using giblets — the heart, liver, neck, etc. from the turkey cavity, she uses hard boiled eggs and turkey bits in her gravy.

Ree Drummond, the Pioneer Woman, on the other hand, loves giblets and includes them and part of the neck meat in her gravy.

But gravy is a story for a different day.

“The Joy of Cooking,” which for many is their first cookbook, says it’s stuffing if it’s placed in the bird, dressing if cooked in a pan.

The National Turkey Federation says the names are interchangeable.

The difference may lie in the ingredients, which are very regional. The basic difference, at least to those of us in the kitchen, is stuffing is from up North and dressing is from down South.

In times past, the word stuffing was distasteful to certain refined palates and therefore avoided.

Many food safety experts say no way no how to stuffing a turkey, because the stuffing needs to be cooked to 165 degrees to kill bacteria, and by then, your turkey will be overcooked and dry.

You can always take the turkey out, remove the stuffing and continue cooking it till done.

Stuffing vs. dressing also has a lot to do with texture. A stuffing will be moist from the rich juices of the turkey. A dressing is more apt to have a crispy top, or be crispy throughout, which is what many people crave. Some will fight for those corner pieces.

Recipes are all over the place, using ingredients like mushrooms, butternut squash, chorizo, cranberries and nuts. I even saw a recipe for Buffalo Cheddar Beer Bread Stuffing, which might really be too far off the traditional rails. There’s dressing with pine nuts and kale, faro and dried cherries, cornbread, chorizo and avocado, pretzels and quinoa.

The U.S. Department of Agriculture does not want you to stuff your turkey, but if you must, take these tips to heart:

• If you are using a stuffing that uses meat, poultry or shellfish, you should cook the items first.

• The stuffing must be prepared or cooked just before the bird will be stuffed.

• The stuffing should be moist, which will help with cooking and will speed the destruction of bacteria.

• The oven should be no lower than 325 degrees.

• Check the temperature of the stuffing with a thermometer.

Here’s the easy way to do what I call stuffing

In a large pot or Dutch oven, melt the butter. Add the celery and onion. Drain all but 1 or 2 Tbsp. liquid from mushrooms. Add mushrooms and stir mixture until celery begins to soften slightly. Meanwhile, heat chicken broth on top of the stove to boiling. Add broth to vegetables and butter. Stir in stuffing mix, remove pot from heat and stir until all stuffing has absorbed some liquid. If necessary, add a bit of hot water to make sure the mixture is completely moistened.

Sprinkle turkey cavity with salt and pepper, then stuff the bird. Cook turkey as usual.  Or spray a greased casserole dish and bake stuffing, covered with foil or a lid, about 30 minutes at 350 degrees.

You could also add dried cranberries and pecans and eliminate the mushrooms.  Brown 1/2 pound sausage to add to celery, mushrooms and onion, if desired.

Using your favorite cornbread recipe, or an 8-by-8-inch purchased loaf of cornbread, crumble the cornbread and set aside on a baking sheet to dry out.

Preheat oven to 350 degrees. Grease a 9-by-13-by-2-inch pan with butter or spray liberally with cooking spray. Set aside.

Crush saltines and add to cornbread.

Using 4 Tbsp. of butter, sauté the celery and onion, until softened. Add remaining butter and melt.

Additions: Add chopped red or green bell pepper to celery and onion and cook until softened.

Add cooked, chopped bacon, about 6 slices, to the mixture, using 1 Tbsp. of the bacon drippings, in addition to the butter, to cook vegetables.

Top with freshly chopped green onion or a handful of chopped parsley before serving.

The slow cooker revolution has come up with all sorts of alternative ways of cooking you thought could only be done one way.

On some cooking show this weekend, time and oven-saving tips included putting your mashed potatoes in the slow cooker to keep them warm.

Why not do your stuffing/dressing in a slow cooker to save oven space?

This recipe comes from Cookingclassy.com

Preheat oven to 275 degrees. Spread bread cubes evenly onto 2 rimmed baking sheets. Bake in preheated oven on alternating oven racks until bread cubes are dried, stirring occasionally and switching pan positions, about 45-55 minutes. Remove from oven and allow to cool. This can be done in advance.

In a bowl mix 2 cups of the chicken broth with the eggs, poultry seasoning, salt and pepper until well blended. Pour diced bread cubes in a very large mixing bowl or two.

Melt butter in a large, non-stick skillet over medium high heat. Add onion, celery and carrot and sauté until soft, about 8-12 minutes, adding in garlic during the last minute.

Pour onion mixture, parsley, sage, thyme and marjoram over the bread cubes and toss. Then drizzle chicken broth mixture over top and toss to evenly coat. Add more broth as needed, but don’t soak or the finished dish will be soggy.

For a 4-quart cooker, recipe can be cut in half.

If desired, add up to one pound cooked, crumbled sausage with sage to mixture.

If you’re feeling adventurous, make your usual stuffing/dressing and add a few dried cranberries, or some chopped pecans. Try a half cup of parmesan cheese in with the stuffing/dressing or sprinkle on grated cheddar, pepperjack or whatever your favorite cheese is and let it melt during the last few minutes of cooking.

But don’t get radical, or there could be mutiny!

By Susan Shinn For The Salisbury Post By any measure, Rich and Paige Gallo had a hellacious summer. A beloved niece... read more