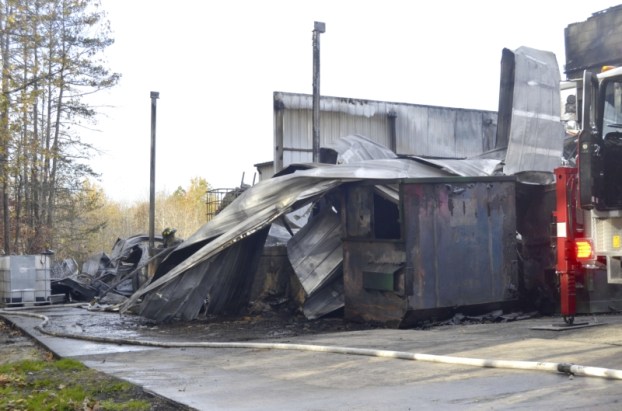 Fire crews responded to Apple Baking Co. early Tuesday morning after someone reported a fire on the dock. Firefighters were able to contain the fire to the dock and side of the roof. Fire Capt. Chad Wood said very little fire made it inside the building. Shavonne Walker/Salisbury Post Fire crews responded to Apple Baking Co. early Tuesday morning where a fire was contained to the dock area, left, and side of the roof of the building. Shavonne Walker/Salisbury Post

WOODLEAF — Fire investigators are trying to determine what caused a fire just before 7 a.m. Tuesday at the Apple Baking Co., home of the popular Apple Ugly pastry.

“Usually we enjoy when things get a little #Ugly here at the bakery,” the company posted on Twitter later in the day. “Everyone is safe.” The company thanked the responding agencies.

The one employee on site when firefighters arrived said no one else was there, and led crews to the location of the blaze. It’s not clear who called 911.

About a dozen fire departments and other emergency personnel responded or were on standby at the plant, located at 380 Apple Road.

“The filters that are used in the baking process are extremely hot when they come out,” Horne said. “They leave them on the back dock to cool, and they were left on the back dock in a container beside some wooden pallets, and right now that’s what we’re investigating.”

Franklin Fire Capt. Chad Wood said when fire crews arrived, flames were visible outside on the dock side of the building and on the side of the roof.

It appears the fire may have been burning long before fire personnel were called. A passerby said they saw what they believed to be smoke in the area around 3 a.m., but didn’t know what it was and didn’t contact authorities.

Wood said very little fire made it inside the building. Most of the fire was contained outside. The size of the building and the possibility that people might have been inside led first responders to upgrade to a two-alarm fire.

Horne said firefighters were thankful that no employees were there and hoped the workers would not be displaced by this incident.

By Josh Bergeron josh.bergeron@salisburypost.com SALISBURY — What will happen to Woodleaf Elementary School once it’s vacated? County commissioners may have... read more