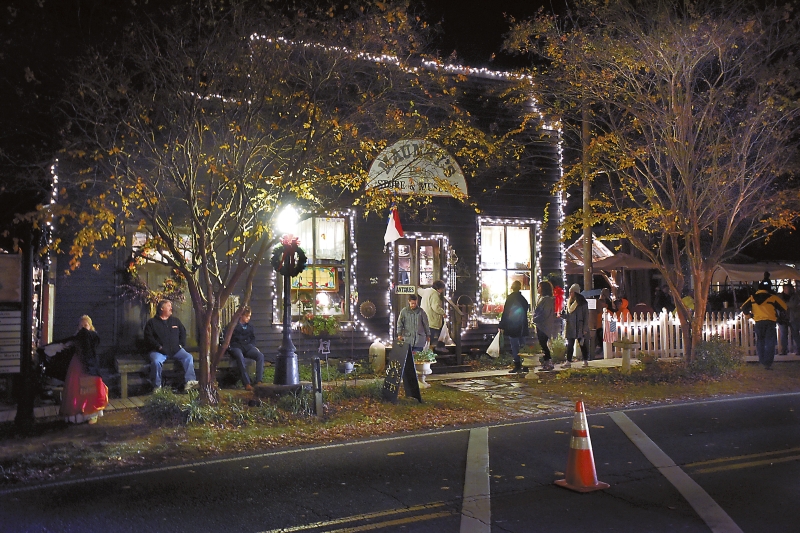 Mauney's Store and Museum dressed up for Christmas and full of David Dryes antiques and collectables during the Annual Gold Hill Lighting of the Fall Fires event when all the village is decorated for the holidays. photo by Wayne Hinshaw, for the Salisbury Post

Gold Hill’s traditional  “Lighting of the Fall Fires”  turned into a scary moment this year with the very dry weather and the gusty winds. The Gold Hill Fire Department always handles lighting the fires and keeps watch over the  flames.

The Lighting of the Fall Fires in the village is the traditional kickoff for the Christmas season in the shops  decorated in their holiday finery. With a purchased  ticket you receive a bag of “gold nuggets” to use as cash in the shops for a sample of food or drink.

Inside the E.H. Montgomery Store, the “Montgomery and Company Bluegrass Band” serenaded visitors with traditional bluegrass. Occasionally, vocalist Chuck Harris would slip in a Christmas song.

In the backroom, dressed in Gold Hill period dresses,  Jodi Davis and Vivian Hopkins joked about a sign hanging on the wall offering a room rented for 50 cents an hour or $3 for all night. They thought the prices were way to low. Surely, what they were thinking could never have taken place in the booming Gold Rush village of Gold Hill.

As I went out onto the wooden, boarded sidewalks, the sound of the bluegrass music was slowly lost, replaced by the rhythmic bumping, bumping sounds of my feet on the irregular wooden planks.

My sense of smell was being teased by the smell of the bonfire in back of the buildings. Inside the shops, there was the smell of the bakery, the winery, pinto beans boiling,  barbecue and other foods that were being served.

In the Mauney Store, a lady asked shop owner David Drye if an item on his shelf was “real.”  He paused and said,  “Yes, it is real, but it is a reproduction of the original.” They shared a laugh.

Agatha and Tommy Overcash stood warming at the wood stove. Tommy spoke of his memories as a child of backing up to a wood stove and warming his pajamas’ backside, then reversing and warming his frontside, then running upstairs into his cold bedroom, hoping to stay warm until he got into his bed. Once you were in bed, he recalled, you had so many quilts piled on top of you, you didn’t move all night.

Back outside in the cold November night, Key Peeler dipped pinto beans from a pot cooking on a wood stove for the visitors to the store.

In the Morgan Ridge Vineyard shop, a lady opened the front door and shouted to a woman behind her, “ I have found the bar wenches. They are here.”  She referred to Debra Graham and Ruth Howard, who were selling wine from the vineyard.

In the old Post Office there was the discussion and sampling of the best tasting cheeseball mixes with Ann Cooper.

Down in the old gas station, now known as the “Feelin’ Station Artisan Studio,” Michelle Erdt from Huntersville explained that she had never been to the event in Gold Hill before.  Holding  19-month-old Phoebe in her arms, she wondered aloud why she had missed  coming before. She would be back again.

Back at the bonfire, firefighter Chris Shugart and wife Kelly stood backed up to the glowing red embers of the fire, warming their backsides like Tommy Overcash had done as a youth.  On occasion the embers would pop and make a little explosion sound.  Chris, the firefighter, would quickly pause from warming and drinking his Cheerwine, making a quick look at the fire. After all, he was one of the keepers of the fire.

We are North: principals join forces to steer North…