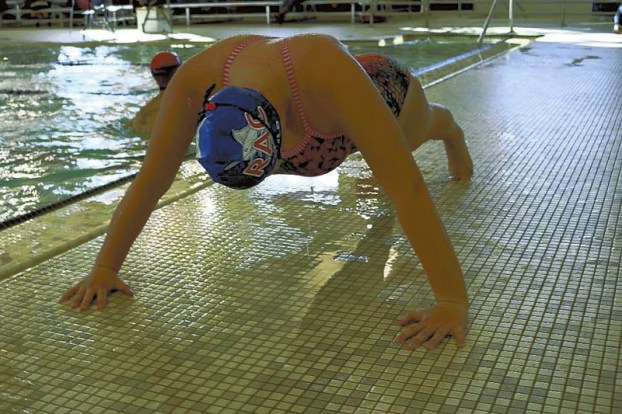 Submitted photo Brenna Culp, a RAC-Y swimmer, does pushups on the side before reentering the YMCA pool during the Military Mile, held in support of veterans and military families.

RAC-Y swimmers go the distance for veterans in ‘Military Mile’

Participants were from Rowan and Stanly counties.

RAC-Y charged $20 for the chance to complete the “Military Mile,” a total of 66 lengths of the 25-yard pool. For the more ambitious swimmers, the challenge included stops at each pool end to complete 10 push-ups, pull-ups or sit-ups.

The swim distance of 1,650 yards, with nearly 660 arm or core exercises, would tire anyone out, but that didn’t deter 39 people, ranging in ages from 7 to 70-plus, from coming together to enjoy a fun, chlorine-filled, water-logged Saturday morning.

Although the T-shirt earned by each participant comes in handy, the real impetus for many of the participants to commit to the event is the opportunity to spend time thinking about the sacrifices made by members of the armed forces, and honor veterans and their families as a community at the Y.

All proceeds, totaling over $500, are being donated to the Family Readiness Group with C-Company 1-131 Assault Helicopter battalion (https://state.nationalguard.com/north-carolina). The North Carolina Army National Guard is based here in Rowan County and supports families of those serving in the National Guard.

Known as Armistice Day until 1954, Veterans Day has honored all those who have served in the U.S. military as well as the 21 million veterans currently living in the United States today. Celebrated on Nov. 11, 1919, to honor the first anniversary of the end of World War I, the holiday became a national observance in 1938.

By honoring all those who have served the United States during peace time or war, RAC-Y continues to emphasize sportsmanship, goal-setting, commitment and the importance of participating and giving back to one’s community.

The swim club has 137 members, with various skill groups to support all ages and competitive levels. Anyone interested in learning more about the swim club can call the J.F. Hurley YMCA at 704-636-0111, or email head coach Hannah Hawkins at hhawkins@rowanymca.com.