All aboard: ‘Polar Express’ opens for a third year 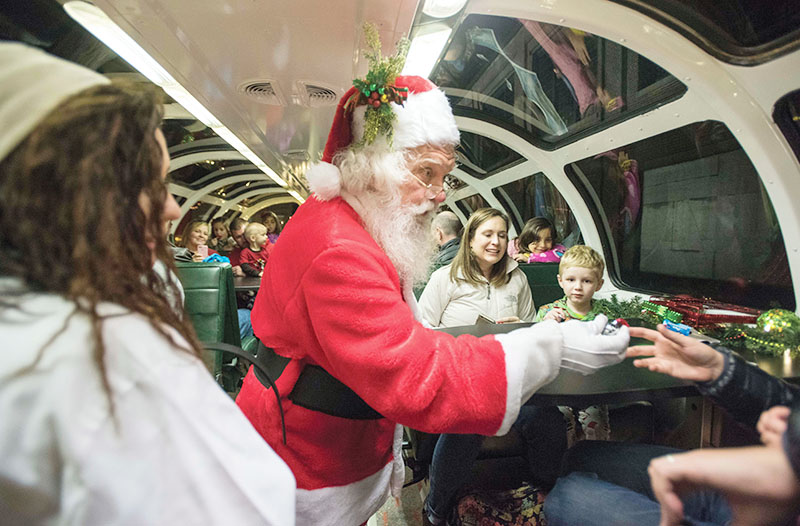 Santa Claus hands out the silver bells in one of the cars in the Polar Express as the popular attraction rolls back into town at the North Carolina Transportation museum in Spencer in 2016. JON C. LAKEY / SALISBURY POST

SPENCER — The cold arrived just in time for the North Carolina Transportation Museum’s opening show of “The Polar Express.” Guests crowded the platform in bathrobes, striped pajamas and fuzzy slippers, clutching cups full of hot chocolate or apple cider as they waited.

When the train pulled up, pulled by a white and green Southern Railroad engine, kids and parents alike began to dance, or jump up and down in excitement. This is the third year the Transportation Museum has put on “The Polar Express,” a show owned by Rail Events, Inc.

Spencer’s show is known far and wide, drawing crowds from other states and other countries.

Mike Zawacky drove down from Toronto, Canada, to see the show with girlfriend Cynthia Ryan and her family. Ryan lives in northern Virginia. Zawacky drove 10 and a half hours through the night Friday, arriving at Ryan’s at 6 a.m. They left to drive to North Carolina at noon Saturday. But it’s been worth it.

“The kids are happy,” he said.

Ryan, there with daughter Angela and three grandchildren, said the children have been bursting with excitement ever since Angela found out about the event online. “The Polar Express” movie is a family favorite.
“They’ve been watching it all week,” Ryan said. “Actually, all month.”

Zawacky will drive back home on Sunday.

“The Polar Express,” be it the book, movie or the train show, is a favorite among all ages. While 5-year-old Brody Tilley was excited to meet Santa Claus on the train, family members joked that it was his grandfather, Thomas Bailey, who was really excited.

Bailey said he likes the story and watches the movie every year, without fail. Wife Shelia said the two live near a train track — but she’s sure their neighbors think a train is coming through their house when her husband turns on “The Polar Express.”

The family drove down from Madison for the day to watch the show. And even Shelia is looking forward to the ride.

“I want to get a bell because I believe,” she said.

This is the first year that the Transportation Museum is running two trains. One, a standard coach train, runs the regular program that won the museum a Best Performance award for its 2014 production — the 2015 show won Best Marketing.

The second train is for those who purchased deluxe coach, first and diamond class tickets. While everyone who hops on board for the roughly one-hour performance gets a cookie, a cup of hot chocolate, a golden ticket and a sleigh bell, those who purchase higher end tickets get a few souvenirs, ranging from a plastic souvenir tumbler to a ceramic mug and a copy of “The Polar Express” book, signed by Santa.

This year the museum has also added “reindeer games” and a magic show for guests to watch while they wait for their train.

Marcus Neubacher, director of administration with the North Carolina Transportation Museum Foundation, said that last year the show sold approximately 25,000 tickets. They’ve already surpassed that number in advance ticket sales for 2016, and Neubacher said that the show is on track to sell more than 30,000 tickets.

The show runs every weekend until Dec. 22, with shows typically running between 7:45 and 8:30. Matinee rides beginning at 4 p.m. are offered on some days. Neubacher said the museum strongly encourages the purchase of advance tickets, as some shows and classes have already sold out.