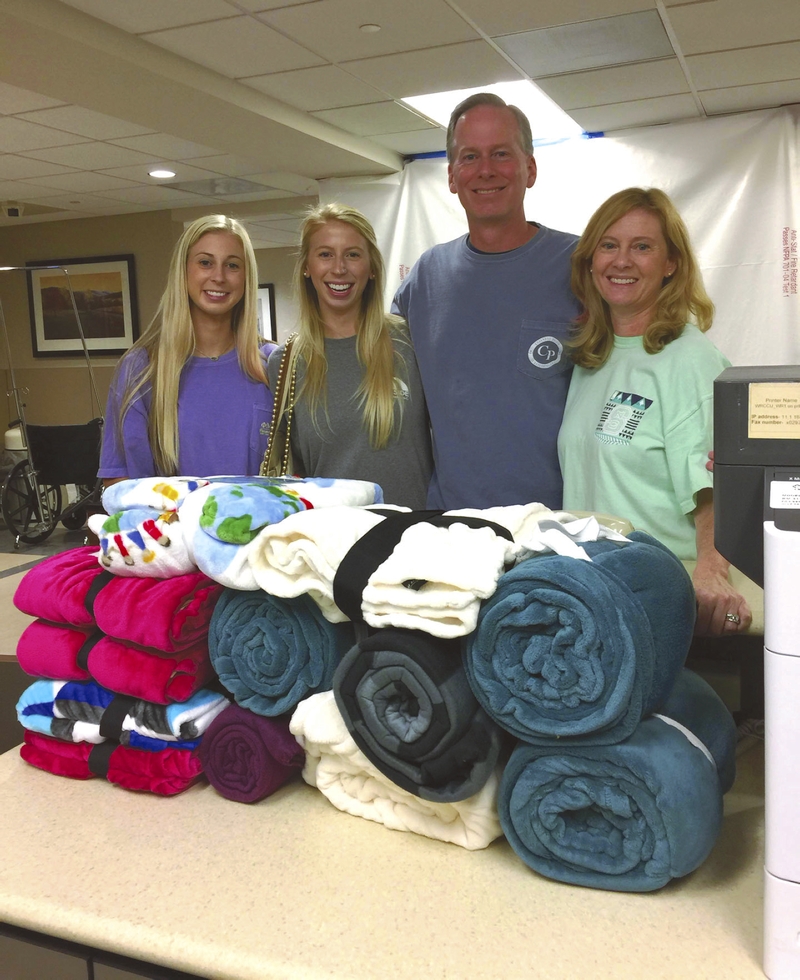 Rich and Paige Gallo with their daughters, Emma (left) and Rachel.

By any measure, Rich and Paige Gallo had a hellacious summer. A beloved niece died May 31 of a heroin overdose. Days later, Paige found a lump in her left breast, and had a mammogram June 23.

“That’s the first time they said the ‘C’ word,” says Paige, who lives in Wake Forest with her husband. She is the daughter of Nancy Sattewhite of Salisbury, and a 1984 graduate of South Rowan High School. She and Rich met soon after they both graduated from N.C. State.

She had the lump removed in July, and doctors first thought it was pre-cancerous. She received a definitive diagnosis a week later. Fortunately, the cancer was in its earliest stages. Paige underwent a lymph node biopsy in late July, but was able to return to her job office manager for a pediatric dentistry group on Aug. 9.

The worst was ahead.

On Aug. 10, Paige got a call from one of their daughters, who was hysterical. Rich was in emergency surgery. When Paige called Wake Medical Center, she learned that Rich, 51, had suffered a massive heart attack.

Her immediate response: You have the wrong person. Rich’s dad and two uncles have all had heart bypass surgery. Surely there was a mistake, Paige thought.

“We have your husband,” she was told once again.

That morning, Rich had gone to his job as general manager of Party City. He was preparing to open the store when he had a sudden, very strong pain — the proverbial elephant was sitting on his chest.

“I’m glad it was major enough for me to know I had to call,” he says. “I was calm. I’ve learned over the years to stay calm under pressure.”

He called 911, then called a co-worker to let him know he couldn’t be part of an upcoming conference call.

He didn’t call his wife.

“I feel like I was somewhat incapacitated at that point,” he says.

As their family converged at the hospital, Paige learned that Rich had come in talking, but went into cardiac arrest. His main artery was 100 percent blocked — the artery known as the “widow maker.”

Dr. John Sinden, Wake Med’s head of cardiology, performed Rich’s surgery. Ironically, the surgeon has cousins in Salisbury; Paige’s mom had been in school with them. Sinden inserted a stent, and the surgery went well. But the surgeon told Paige that her husband’s heart had been damaged. The next 36 hours would be critical.

“Do not leave the building,” he told her.

“We were dumbfounded,” Paige says.

For the next week, Rich stayed in cardiothoracic ICU, in the bed closest to the operating room. Paige and her girls sat by his bedside the whole time while he was kept in a medically induced coma so his body — and his heart — could rest.

“His heart took a big hit,” Paige says, and it was operating at about one-third of normal capacity.

“The doctor was really concerned,” she says. “They just needed him to rest. We just started the waiting game.”

Fortunately, Wake Med has a hotel on the third floor. Friends paid for Paige’s stay the first couple of nights. She was at the hospital Aug. 10-22.

“It was good to have that place to be close by,” she says.

One morning, she got a call at 8 a.m. Come now. Doctors were afraid Rich had a stroke. A CT scan revealed a bleed. Hours later, Rich was taken for an MRI.

“We all just prayed he was OK,” Paige says.

The MRI showed nothing.

On day 9, Rich began to wake up. After initial “ICU delirium,” he told his wife he was hungry. He moved to rehab on Aug. 22, the day the girls went back to school at ECU. Emma is a senior and will graduate in the spring with a degree in public health. She starts an internship with the N.C. Multiple Sclerosis Society in Raleigh in January. Rachel is a sophomore elementary education major.

“It really was much harder on Paige and the girls,” he says. “When I woke up, I was in recovery mode. I knew I was gonna get better. It was all positive for me.

“But Paige and the girls waited in that ICU waiting room for a long time.”

Paige quickly became aware of how cold it was in that waiting room. She and the girls brought blankets from home, and noticed that many other folks who were waiting did not have them. After Rich got home, Paige came up with an idea. Why not donate fleece throw blankets to Wake Med?

They talked with the hospital, a friend created a logo, and “Wrapped in Hope” was born. After Paige wrote about her family’s experience on facebook, the blankets started coming in.

Paige’s own health scare was not quite over. Just before she was scheduled to begin radiation, doctors found another suspicious area. She ended up having a stereotactic breast biopsy while Rich was still in the hospital. It turned out to be benign. Days later, she told her husband.

“This is ridiculous,” he said.

“Radiation isn’t painful,” she says, “but you’ve got to go every day. The hardest part is holding still.”

As radiation went on, Paige got tired, and her left breast got burned. She was tired, she was irritable — and then she was done.

Rich, Paige and the girls knew they wanted to give back to the hospital.

“Our experience was just incredible,” she says. “As horrible as that experience was, our ICU nurses made it as bearable as possible.”

They gave gift baskets to the nurses, but Paige also wanted to pay it forward with Wrapped in Hope.

“We decided we wanted to give blankets so people would have something to wrap up in, something they could keep,” she says.

Paige plans to drop off blankets at the hospital for as long as family and friends keep sending them. She and her family will deliver 30 blankets at Thanksgiving.

“I would love to take 365 blankets for Wrapped in Hope,” Paige says, “because there’s somebody sitting there every day of the year. We just want them to know we’re thinking about them.”

“This was Paige’s idea and she ran with it,” Rich says. “It’s a great thing, and a lot of blankets have been donated. This is closure for her. We were treated so well, and this was something we felt strongly about doing.”

“People have said to me, well, you’ve had a really crappy year,” Paige says. “Well, yes and no. In some ways, it’s been a great year. I got rid of my cancer, and Rich survived a heart attack. That’s pretty good. I think we won.”