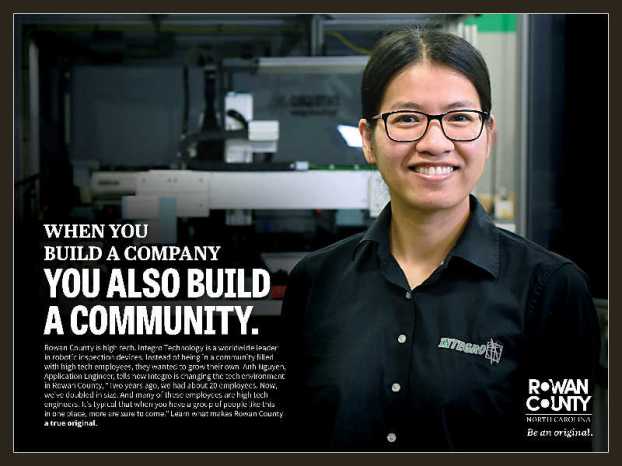 When ChandlerThinks accepted the job of developing a brand strategy for Rowan County, there was reason to wonder how Steve Chandler and his company would pull it off.

With its rural-urban divide, 10 municipalities and a stubborn streak as wide as the Great Wagon Road that ushered in our Scotch-Irish and German ancestors, Rowan County doesn’t easily lend itself to a singular theme or unifying message.

As it turns out, that is our message.

At least, that’s what Chandler and the local committee working with him concluded. The Rowan County brand story, as Chandler presented it Thursday at a Chamber of Commerce breakfast, weaves together our diversity and differences and tags Rowan as a place where you can truly “be an original.”

People who expected something earth-shaking may have been underwhelmed, but this is Rowan. Chandler said the local committee insisted that the branding campaign genuinely reflect Rowan County. In a sense they are fashioning a community weakness — disunity — into a strength. Rowan County is where you can carve out a niche, take your own stand and be an original.

Many people who saw the branding presentation came away enthusiastic. As they recruit teachers, train workers and serve constituents, they see strong individuality as a valuable trait — one people need to survive in the global economy — and they believe Rowan can use the theme to its advantage. It’s something to build on.

The branding campaign has a long way to go. So far ChandlerThinks has conducted surveys and interviews and written Rowan’s “brand story.” Still to come is a plan for how to roll this out and use the brand story to promote Rowan. A branding campaign is not going to open the floodgates on economic development, but it could give the community a consistent message to rally around and share. Is a place to be an original enough? It can be, if we do it right.

All told, Rowan plans to spend $500,000 on a branding strategy, to be paid for by the Convention and Visitors Bureau with occupancy taxes that visitors pay at local hotels. Only part of that sum goes to ChandlerThinks; the original contract was for $138,000.

This will be money down the drain if residents fail to embrace the first message Chandler shared months ago and again Thursday: Rowan needs to believe in itself. Outsiders have a more positive opinion of our county than we do, in many instances. It’s hard to sell someone else on the community if we have a low opinion of it ourselves.

… Letter: We’re blessed to be citizens of the U.S. I appreciate all the Trump supporters who are asking for unity... read more