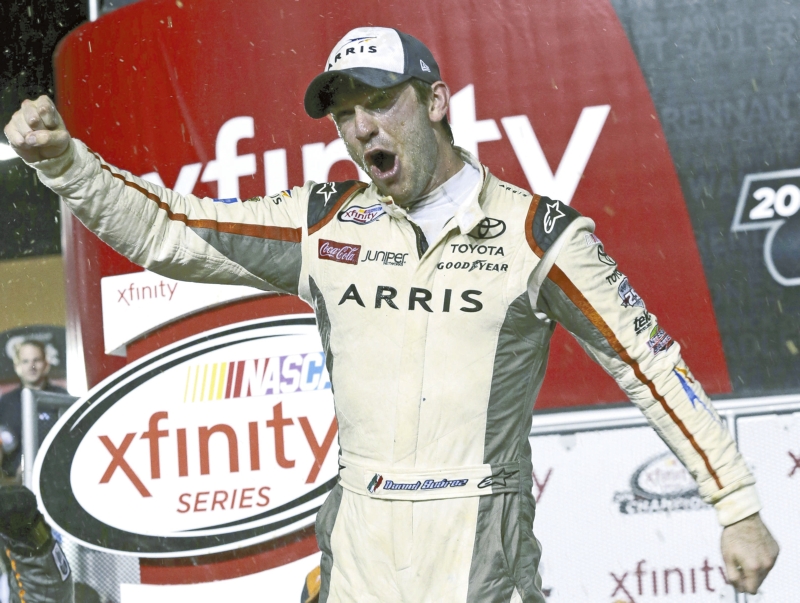 “It’s very hard to put into words,” Suarez said. “I’m speechless right now. I’m just very proud of everyone and thankful to have the family that I have, my mom, my dad. They gave me all the tools to be here right now. They put me in a car even when we didn’t have the support or the racing background. They supported me, and right now we are just living a dream.”

Suarez thanked fans and his native country in Spanish in victory lane. His win was the first of the weekend for Joe Gibbs Racing, which has two drivers — Kyle Busch and Carl Edwards — vying for the Sprint Cup championship Sunday.

“For us, after two years, to be where we are tonight is amazing,” car owner Joe Gibbs said. “This is going to be a big deal for our sport. It’s huge.”

It was just Suarez’s third career victory, but the most important for obvious reasons.

Sadler, who gambled by taking two tires on the final pit stop, finished third in the race and second in the standings. The former Cup driver and sentimental favorite remained without a championship at any national level in a career spanning more than two decades.

“This is by far the hardest because I feel like this is the best team I’ve probably ever worked with,” said Sadler, who drove with an interim crew chief because his usual one was suspended. “We felt like we could come in here and compete, and we made a great pit call there at the end to get some clean air.”

Sadler asked Whitt to give him the top lane on the restart, but Whitt declined.

Allgaier finished sixth, and Jones ninth. Both got stuck behind leader Cole Whitt on the final restart, and when Whitt spun his worn-out tires, Allgaier and Jones fell way behind Suarez.

“It’s really frustrating,” Jones said. “I don’t mean to bag on the guy so much, but it’s like, ‘Hey, we’re up here racing for the championship.’ And maybe we don’t even win it if he pits and lets us move up, but at least we would have had a fair shot at it. I feel like we kind of got robbed of at least our chance to race for it. Yeah, it’s just unfortunate. It just wasn’t a great situation altogether.”

The chaos definitely benefited Suarez, who passed Sadler low and pulled away from the field. He led 133 of the 200 laps in the race.

Last year’s top rookie in the second-tier series, Suarez began racing karts in Mexico and moved to North Carolina as a teenager to pursue a career at NASCAR’s national level. He had to teach himself English by watching cartoons on American television and moved through NASCAR’s Drive for Diversity program to land a job with JGR.

Suarez is the first D4D driver to win a championship.

Suarez has soared in his second season with Gibbs and benefited when teammate Jones, the pre-Chase favorite to win the title. As Jones struggled down the stretch, Suarez upped his performance. He won at Dover to move through the Round of 12 and was runner-up at Kentucky and third at Charlotte. Then, Suarez registered finishes of third (Kansas), fifth (Texas) and fifth (Phoenix) to set up his championship-clinching victory at Homestead.

This will surely make him an even bigger star back home. On a return trip to Mexico with NASCAR officials last month, he was celebrated like he was Dale Earnhardt Jr.

For Gibbs, it is his second driver championship in the Xfinity Series but first since Kyle Busch won in 2009.

The Gibbs organization also celebrated its fifth owner’s championship in the Xfinity Series.