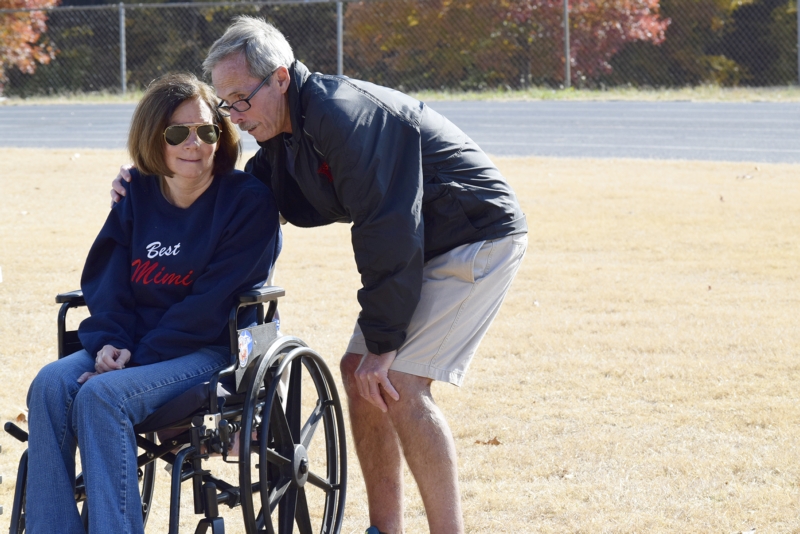 SALISBURY — Saturday morning at Knox Middle School, a group of runners hoped to work a little magic. Many of those participating in the Melinda Weatherford 5K, sponsored by the Salisbury-Rowan Runners Club, were familiar with its namesake.

They were friends, family and community members whose history with Melinda or her husband Steve stretched back 10, 20 or 30 years. Melinda and Steve were there, themselves, accepting hugs and handshakes.

Melinda is currently seeking treatment for Multiple Sclerosis (MS), a disease she’s been fighting since 1989. MS is a degenerative neurological condition that can cause brain fog, fatigue and debilitating muscle spasms. Many diagnosed with MS may eventually end up wheelchair-bound — just like Melinda.

But it’s that fate that the Weatherfords, and the hundred or so participants, hope to reverse. On Nov. 26, Melinda and Steve will fly to California for Melinda to undergo a stem cell treatment. Steve said the method will use Melinda’s own stem cells, pulled from fat, which will be wiped clean of disease and re-introduced. It’s a treatment that has had some success in other patients, Steve said, and if all goes well it may even get Melinda back on her feet.

One of them, Allison Poplin, of Albermarle, came up with the idea of doing the 5K. Poplin knew the Weatherfords from the days the two families went sailboat racing together.

A few years ago, Poplin was involved in a 5K in Albermarle that raised roughly $28,000 to pay for a local boy’s open-heart surgery. When Poplin heard about Melinda’s treatment, she knew they could do the same, and contacted local fitness expert David Freeze.

The result was Saturday’s 5K, attended by friends and family from across the state, and across state lines. One of the event’s main sponsors was Disney Watercraft Friends, courtesy of an old co-worker of Steve’s from when he drove a riverboat at the park.

“People want to do good things,” Poplin said. “They want to. There’s so much good in the world.”

Freeze said that everything for the run was donated, which allowed the runners’ club to donate everything to the Weatherfords. Donations had already provided a $2,500 deposit to hold Melinda’s place for the treatment, but Saturday Freeze also presented the couple with a check for more than $1,100 to cover their flights to and from California, and one for $12,499 — enough to fully pay for Melinda’s treatment.

“This is awesome,” Melinda said. “I thank all these people.”

The two will fly out Nov. 26, and Melinda will undergo the procedure on Tuesday, Nov. 29. If all goes well, Steve said, they’ll be home by the end of that week. They’re both excited for the procedure, and look forward to the relief it will bring.

“I can’t tell everyone thank you enough,” he said.

Race results will be posted at www.salisburyrowanrunners.org.