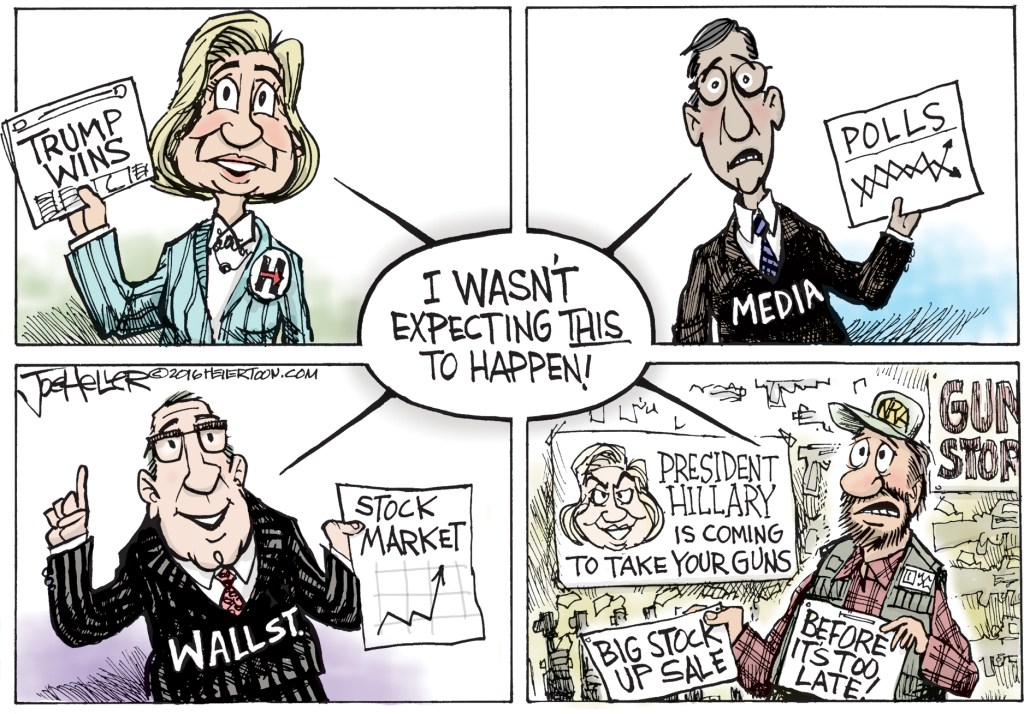 Protesters have every right to wave signs proclaiming that Donald Trump is “Not My President” (although their credibility is compromised if they didn’t vote). But they are wrong on their facts. Trump is their president — our president — the only president we’ll have for the next four years.

Those protesters have many reasons to feel aggrieved. Trump callously exploited ugly strains of racism, sexism and xenophobia during his campaign. FBI director James Comey broke Justice Department rules by intervening in the campaign’s closing days. For the second time in five elections, a Democrat won the popular vote but lost the Electoral College.

Still, Trump won fairly. The outcome must be accepted and respected. That’s the American Way.

But the American Way must mean something else as well. It must mean that a relentless and independent press holds the new president accountable from day one. No backing down. No buckling under.

During the campaign, news organizations realized that Candidate Trump had changed the rules, lying repeatedly and refusing to correct his statements or apologize for them. They became more aggressive in confronting his fabrications, and that aggressiveness has to intensify in their coverage of President Trump.

He repeatedly insults reporters as “scum,” “clowns” and “dummies.” (He called Cokie “kooky” on Twitter.)

He’s barred reporters he doesn’t like from his campaign events and threatened to loosen libel laws. Recently, he’s evaded reporters assigned to cover him.

“If Mr. Trump keeps up the posture he displayed during the campaign — all-out war footing — the future will hold some very grim days, not just for news reporters but also for the American constitutional system that relies on a free and strong press,” writes New York Times media critic Jim Rutenberg.

Trump’s anti-press missiles are only part of his assault arsenal. He boasts of more than 28 million followers on Facebook, Twitter and Instagram, and in effect he’s created the TBN, the Trump Broadcasting Network, which he uses adroitly to communicate directly with his followers and evade the filter of journalistic scrutiny.

In his revealing interview with Lesley Stahl on “60 Minutes,” he called social media “a great form of communication” and added, “I’m not saying I love it, but it does get the word out.” When reporters “give me a bad story or … an inaccurate story,” social media provides “a method of fighting back.” The TBN, he concluded, “helped me win all these races where they’re spending much more money than I spent.”

Trump has every right to employ these strategies, and he’s correct about their effectiveness. But that just means it’s more important than ever for journalists to say to voters: “What you heard on TBN, what you read on Facebook or saw on Instagram, is not the whole story.”

Trump’s ability to combat the media — or bypass it completely — is enhanced by the rise of “fake news,” deliberately false stories that are spread rapidly on the web by skilled hoaxsters who manipulate popular platforms like Facebook and Google.

“In this election, there were a stunning number of fabricated stories masquerading as legitimate journalism,” writes Andy Alexander, a former ombudsman at The Washington Post. “They constituted a massive volume of civic misinformation.”

The mainstream media made many mistakes in the last campaign.

In a desperate pursuit of ratings and revenue, they gave Trump far too much free coverage during the primaries. In the fall, they relied too heavily on polling and not enough on street-level reporting that might have sensed the pro-Trump surge that surprised just about everybody on election night.

As New York Times public editor Liz Spayd wrote: “I hope its editors will think hard about the half of America the paper too seldom covers.”

But those mistakes don’t diminish the critical importance of the media’s role as the Trump Era dawns. It has to fight doggedly against the misguided notion that we are in a “post-truth era,” where facts don’t matter, and all journalism is about attitude and opinion.

“If you have a society where people can’t agree on basic facts, how do you have a functioning democracy?” asks Marty Baron, the executive editor of The Washington Post.

Good question. The answer is you cannot. And the only institution that can provide those “basic facts” is a free, fierce, fearless press. That’s the American Way.