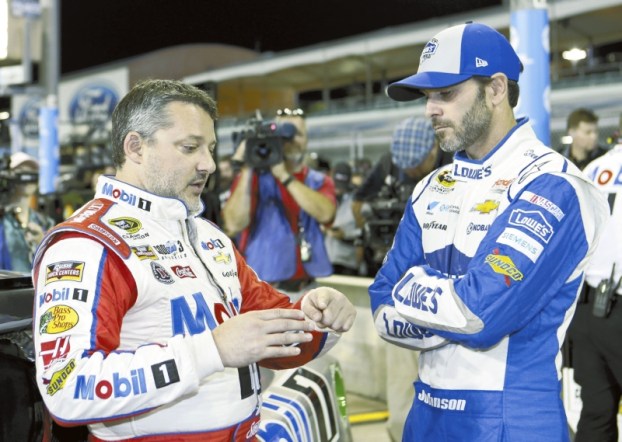 AP photos Top: Drivers Tony Stewart, left, and Jimmie Johnson talk before Friday’s qualifying. Stewart is retiring and Johnson has a chance for his 7th championship.

Kyle Busch would love to spoil Johnson’s record run with a racing milestone of his own and win back-to-back Sprint Cup championships.

The four finalists have raced each other for 35 weeks — and rode bikes, played video games and shared laughs in the lead-up to the finale Sunday at Homestead-Miami Speedway.

The top finisher among the four contenders will be the NASCAR Sprint Cup champion. Under the one-race elimination format, Kevin Harvick in 2014 and Busch in 2015 both won the finale to take the title.

Johnson, one of NASCAR’s greats, would stamp himself in the record book with a record-tying seventh championship. Johnson would match Dale Earnhardt and Richard Petty as the only drivers with seven Cup championships.

Johnson, Busch, Logano or Edwards could leave Florida a champion.

Tony Stewart is simply ready to walk away.

Stewart, the three-time Cup champion, ends of one racing’s great careers when he retires following an almost two-decade NASCAR stint.

“There hasn’t been any part of my career that I didn’t enjoy,” Stewart said.

Here are some other items of note for Sunday’s race:

The championship is decided on the Sprint stage for the final time.

Sprint disconnected with NASCAR, ending its title sponsorship of the top series following this season. NASCAR heads into the offseason without a sponsor announcement, a troubling sign for the series already faced with dwindling attendance and sagging TV ratings.

Sprint’s exit means NASCAR will enter a new entitlement agreement for just the fourth time since 1971, when RJ Reynolds began its 33-year sponsorship of the top series through its Winston brand. RJR pulled out after the 2003 season and Nextel stepped in until Sprint’s corporate merger.

“If you look at what’s going on in the NFL and the viewership, all the sponsors watch that,” team owner Rick Hendrick said. “The good news is we have not slipped as much as some of the other folks.”

Logano is trying to become the first Ford driver to win the championship since Kurt Busch in 2004.

“There’s a heck of an investment we all make in this sport,” said Dave Pericak, director of Ford Performance. “We wouldn’t be doing that if we weren’t getting a return on our investment.”

Stewart-Haas Racing will field Fords next season, ending an eight-year run with Chevrolet.

“We’ve been so proud of what we’ve accomplished, not to mention an incredible run with Tony Stewart,” said Jim Campbell, VP of performance vehicles and motorsports for GM.

Clint Bowyer finishes the worst season of his 11-year career in his lone season at HScott Motorsports.

Bowyer drove a stop-gap season at HSM before he takes Stewart’s ride in the 14 in 2017. Bowyer had vowed to reshape to team and leave it as winning organization. Bowyer failed to post a top-finish for the first time and trudges into the finale 27th in the standings.

Homestead also could mark the final race for HSM, which fielded cars for Bowyer and Michael Annett this season. Annett failed to record a top 10, is 36th in the standings and has been shifted to the second-tier Xfinity Series for 2017.

Without a driver, team owner Harry Scott could shutter HSM and sell its charter.

“Harry is considering a number of options for 2017. He has not made a final decision yet but will do so in the coming weeks,” the team said Saturday.

Brian Scott makes the final start of his 52-race career following his retirement announcement. Team owner Richard Petty said he was still looking for a driver in the No. 44 Ford next season. … Tommy Baldwin Racing sold its charter this week and faces an uncertain future. Regan Smith, with one top five this year, is considering other options for 2017.