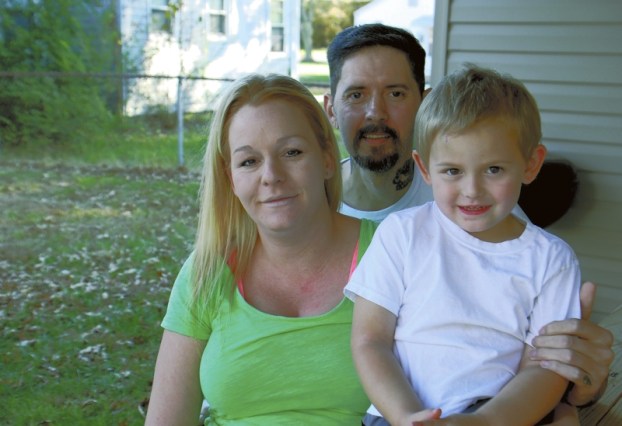 Mark Wineka/Salisbury Post John Cannon sits with his fiance Jessica Heilig and their 3-year-old son, Reyd, outside of their Granite Quarry residence. Cannon, a former fireman for Granite Quarry and Salisbury, is preparing for radiation and chemotherapy to fight a cancer that has returned. Doctors removed his left lung in January 2015.

“It caught me off guard’: Former firefighter John Cannon faces a new bout against cancer

GRANITE QUARRY — In December 2014, while he was shopping for Christmas at Concord Mills, John Cannon received one of those calls — did he want the good news or bad news first?

Cannon said give him the bad news.

Dr. Nilesh Patel, a pulmonary specialist in Salisbury, told Cannon he had found a tumor in John’s left lung. Cannon had stage 3, non-squamous cell lung cancer — the reason why walking up just one flight of stairs at his apartment building could make him breathless.

The good news was that Patel and other doctors wanted to go after the tumor. But Cannon faced more sobering news in the days ahead. His career as a full-time firefighter for Granite Quarry was over.

“He was the one who actually said, ‘You’re not going to be able to do that anymore,'” Cannon says.

The January 2015 morning he drove down to Carolinas HealthCare System NorthEast for his surgery, Cannon smoked his last cigarettes. He recognized it wasn’t the inhalation of smoke during his time in the fire service that had led to his lung cancer.

“I knew it was 26 years of smoking cigarettes,” he says.

From the beginning, Cannon thought the operation would work. To him, it was going to be in, out, done. “I never thought about dying,” John says. “It never crossed my mind.”

After the lengthy operation, Cannon spent two weeks at NorthEast, followed by a regimen of chemotherapy. When he first came home, breathing was difficult, but he surprised his doctors by never needing oxygen.

He gradually got better, though a simple chore like washing the car proved tough to accomplish. Scans and bloodwork every three months at Dr. William M. Brinkley’s office in Salisbury showed no return of the cancer.

This October, if those readings had been clear once again, Cannon would go to followups with Brinkley every six months.

The oncologist’s office called Cannon after he missed his appointment to hear the October report. Cannon thought it was no big deal. He knew he didn’t have enough money for his insurance co-payment that week, and he asked the office scheduler to move the appointment several days ahead.

The office called back with news the physician’s assistant wanted to see him the next day. Cannon turned to his fiance, Jessica Heilig, and said, “Dang, that doesn’t sound good.”

Cannon learned his non-squamous cell cancer was back. It showed up as a spot in the center of his chest. The cancer was in a lymph node and looked as though it were eating or eroding into the trachea.

To Cannon, it made sense. He had been feeling a pain in his chest, and he knew it wasn’t near his heart. After his left lung had been taken out, Cannon’s heart had moved even more to the left side of his body.

Brinkley told him surgery would not be an option this time, and he has prescribed a seven-week combination of radiation and chemotherapy that will start after Thanksgiving. During that seven weeks, Cannon will face a dose of radiation every day.

“This time, it hit me a lot harder,” Cannon says of the diagnosis. “It caught me off guard. It’s been like a brick.”

This latest cancer fight might not be Cannon’s biggest challenge.

He and Jessica, who have been together five years, have a son, Reyd, who will soon be 4 years old. Jessica is pregnant and due to deliver their daughter in late January, probably about the time Cannon will be at his weakest.

They have financial challenges, too. Cannon is on disability, and Jessica works six days a week at East Coast Wings. The couple have health insurance under the Affordable Care Act, but last week Cannon set up a Go Fund Me site, titled “John & Family Fighting Cancer” to help with their expenses.

Cannon, 45, talks about what lies ahead as Jessica and Reyd stay busy in another room of the house.

“It’s not about me,” Cannon says. “Those two in that room and my other son (15-year-old Isaac) are my life. If it’s my time, I can accept that, but is everything OK with them?”

As firefighters go, Cannon came to the profession late in life. He grew up in Charlotte, graduated from West Charlotte High and did electrical work and general construction jobs for close to 15 years.

But his last job, before being laid off, was working as an electrician on a new wing at Novant Health Rowan. He ended up living on South Fulton Street, and one night when there was a house fire on the street, he walked his dog there to see the action.

Flames were rolling out of a second story, and he watched in awe as firemen kicked in a front door and went inside the burning building.

David Morris, a Salisbury City fireman who was chief of the Granite Quarry Fire Department, recommended to Cannon that he volunteer with a department first, to see if he liked firefighting.

Cannon signed on with Granite Quarry and enrolled at Rowan-Cabarrus Community College, earning his Firefighter I, Firefighter II and EMT certifications.

“I got into it late, but I loved it,” Cannon says. “I wish I would have gotten into it when I was young.”

He started working part-time for the Granite Quarry department and by 2011 was hired by the city of Salisbury. When Granite Quarry went to full-time firefighters and 24-hour coverage of the station, Cannon signed on as a town employee.

He started with Granite Quarry toward the end of 2013.

Meanwhile, Cannon had a knee that, in his words was “going bad.” He also had troublesome neck pain. The problems required back-to-back surgeries. About this same time, Cannon noticed the shortness of breath he was having.

His family physician, Dr. David J. Caron in Granite Quarry, said Cannon might have experienced a blood clot after his surgeries, and he suggested they take an X-ray, then a CT scan.

The bottom of Cannon’s left lung was all white in the scan and filled with mucous or fluid. It essentially was not working.

Caron said it could be pneumonia, but he wanted Cannon to visit Patel for a scoping. Cannon hoped it would be a simple matter of cleaning out the lung. That’s when the cancer diagnosis came back.

“It wouldn’t have been caught if I didn’t have the other surgeries,” Cannon says.

He credits Caron for saving his life.

“Me and that man have cried together,” Cannon says.

Doctors thought Cannon would have to rely on oxygen after his left lung was removed because his right lung was “eat up with COPD,” Cannon says.

But when he stopped smoking, the right lung responded with renewed capacity.

Cannon acknowledges he tried to smoke a cigarette again, after the lung was removed. His body refused to allow it.

They have received a lot of help from Jessica’s mother. Cannon calls both Jessica and her mother lifesavers for the whole family.

Cannon looks thin these days, but he says “a buck-fifty” has always been his fighting weight. His loss of appetite probably comes from the new cancer eating at his trachea.

Cannon misses the brotherhood of a fire station and is appreciative of the past barbecue fundraiser the Granite Quarry department held during his first bout with lung cancer.

“I think I can beat it,” Cannon says of this next fight. “My hopes are high.”

‘It became a part of me’: For 70 years, Gene Caldwell has been center of music at Sandy Ridge

LANDIS — On a pew behind him, Gene Caldwell has spread out copies of the three gospel songs he wants... read more