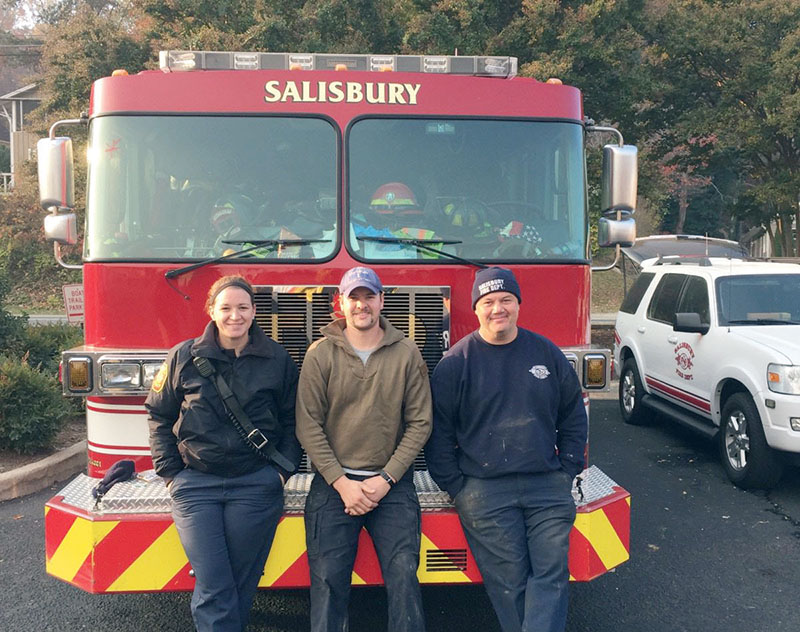 SALISBURY — With mud still caked on their boots, three Salisbury firefighters made the two and a half hour trek back Friday evening after having worked with other fire agencies from across the nation as they battled the wildfires in western North Carolina.

The fire began Nov. 8 in Chimney Rock State Park and to date the fire has burned 2,489 acres on N.C. State Park property and 4,682 acres on private property. According to the N.C. Forest Service there are 920 participating personnel.

“It’s an honor to be picked to go,” McCulloh said.

The trio not only worked alongside Kannapolis firefighters, of whom they don’t really ever get to work, they also worked with firefighters from Arizona and New Mexico as well as those from dozens of other states.

This is the second group to deploy from the Salisbury Fire Department. A group of four traveled to the same area a week ago.

“As soon as we got there, we were put to work,” McCulloh said.

The first day, firefighters joined with a team from Kannapolis and set out to a part of the mountain where they worked to protect homes from the fire. Firefighters cleared leaves and debris that could catch fire away from the homes.

The firefighters also put water on the roadside so the fire didn’t “jump the road,” McCulloh said. Since the firefighters were hosing the one side of the road it was a way to keep the fire contained to one side.

On Thursday, the crews pumped water from area ponds that were then loaded onto brush trucks and used to fight the fires.

The crew worked between 12 and 16 hours each day, ate, bathed and prepared for bed. The fire crews slept in large event-sized heated tents and on cots provided by the American Red Cross.

Nights were cold, McCulloh said, but they were grateful for a warm place to rest their heads, off the ground.

Weldon was the member of the team who also was deployed to help in Lumberton with Hurricane Matthew.

“These were two totally different situations. The Lumberton deployment was humanitarian. This was about preventing the growth of the wildfires,” Weldon said.

He called both deployments equally rewarding.

It’s likely that if needed, the crew could return, McCulloh said.