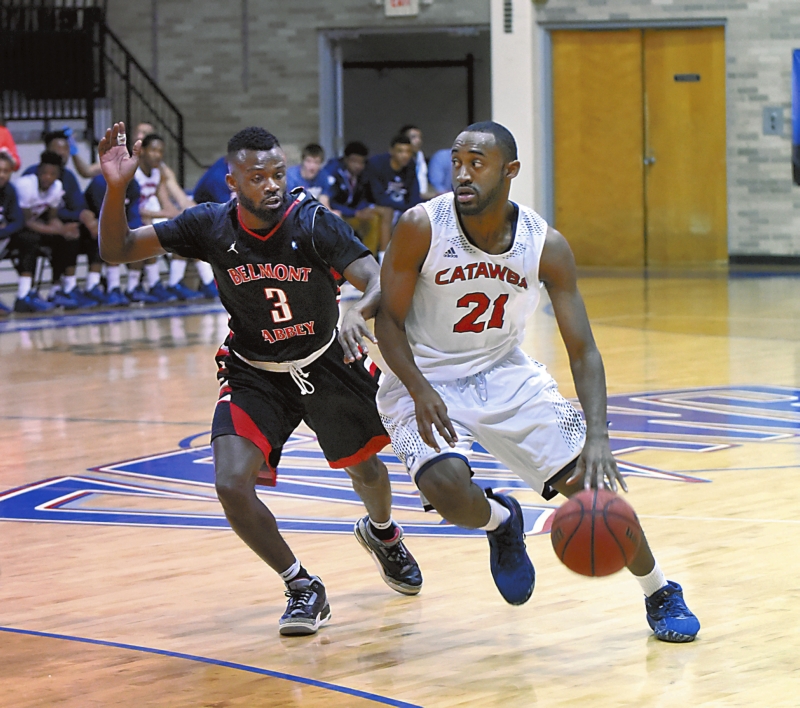 SALISBURY — Lots of people — including coach Rob Perron and high scorer K.J. Arrington — pointed at reserve swingman Andrew Ingram as the reason Catawba blew past Belmont Abbey, 82-60, on Saturday afternoon.
“Andrew barely played when we lost to Lenoir-Rhyne on Wednesday, but then he had two phenomenal practices and those practices carried over to today,” Perron said. “He energized us.”
Ingram’s solid stat line in 25 minutes (nine points, three assists, no turnovers) told only part of the story.
“Andrew is probably the reason we won,” said Arrington, who scored 18 points. “His energy and his defensive focus made a difference. He took good shots. He got us going.”
Catawba (3-1) threw down five dunks at Goodman Gym, including two each by Jerrin Morrison and Troy Warren, as it bounced back from Wednesday’s draining, double-overtime loss to L-R.
The Indians were challenged by the Crusaders (2-2) and streak-shooting Australian guard Jacob Wilson in the first half.
“They came out very hot,” Ingram said. “But no one had really pressured them so far this season, and we were going to be the first to do that. We have the depth to pressure teams and force turnovers.”
Belmont Abbey shot 54.5 percent in the first half but still trailed the Indians, 33-30, at the break. That’s because the Crusaders turned it over 14 times.
Catawba put together a furious flurry early in the second half, a human hurricane that tore open a tight game.
Catawba led 45-43 with 13:14 left to play, but three minutes later the Indians were in complete control. Guard Rakeen “Rock” Brown was the catalyst for the decisive run.
Brown attacked the rim and made two free throws to start the spree. Then Brown grabbed a defensive board and got the ball to Arrington, who took a hard bump but still banked in a runner for a six-point lead.
Then a missed 3-pointer by the Crusaders led to another chance for Catawba to run the floor. Morrison got the defensive board, made the outlet pass, then sprinted down the right side, trailing Brown. Brown flipped the ball back to Morrison who soared and splashed the 3-pointer that pushed the lead to 52-43.
That electrifying shot and the roar of the crowd prompted a Belmont Abbey timeout.
“I told the guys it was time to turn it up,” Arrington said. “We had a chance to step on their throat.”
The Crusaders scored after the timeout, but Jeremy McLaughlin tipped in a miss by Ingram for a 54-45 lead, and then a tough defensive board by McLaughlin led to another transition opportunity. Brown located Arrington, and Arrington’s left-wing 3 sent the Indians ahead by a dozen points at 57-45.
Catawba’s next two possessions were more of the same. Another 3-pointer by Arrington, followed by another 3-pointer by Morrison, who scored 17. Catawba led, 63-49 with 10 minutes remaining, and even with standout Jameel Taylor having a quiet night that included foul trouble, the Indians were headed for a clear-the-bench victory.
The Indians made it look very easy at times, shooting 59.4 percent in the second half and 53.1 for the game.
“We had seven guys shoot better than 50 percent,” Perron said. “We got good shots. We took a lot of 3s (9-for-23), but they were patient 3s.”
Catawba had 22 assists, with Brown logging seven and Arrington and Taylor getting four each. Assists were credited on 14 of Catawba’s 19 second-half buckets, which indicated more sharing and less dribbling. Catawba had a slight rebounding edge despite Belmont Abbey’s 6-foot-11 Aidan Richard.
“The emphasis coming off a tough loss was to not let anyone out-effort us,” Perron said.
Effort was good. Catawba forced 22 turnovers for the game, including 11 steals, and did a far better job on transition defense than it did against Lenoir-Rhyne.
Deion Lane had 20 points and 10 rebounds for the visitors. Wilson scored 17, but only two came in the second half.
It’s just one non-conference game in a long season, but Ingram, a senior, showed he can be an important factor moving forward.
“Whatever the team needs me to do, I’ll try to do,” Ingram said. “I just want to be that piece that fits in.”