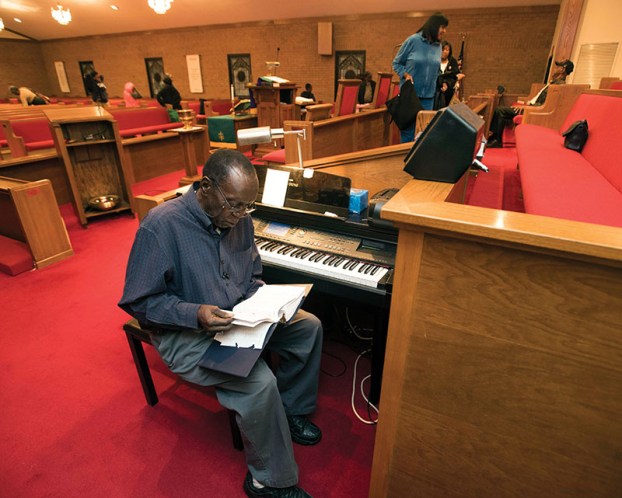 ‘It became a part of me’: For 70 years, Gene Caldwell has been center of music at Sandy Ridge

LANDIS — On a pew behind him, Gene Caldwell has spread out copies of the three gospel songs he wants his choir to practice. An overriding theme of thanks pervade his selections — fitting for what will be the last Sunday service before Thanksgiving.

Caldwell stands up from his piano and starts the process of getting his singers’ attention.

“Good evening, choir,” he says quietly, and the words are lost amid the conversations still going on. Caldwell’s deeper, more serious voice follows.

“Choir members,” he says louder, as the discussions stop. “Turn to page 243.”

Before the Wednesday night gospel choir practice at Sandy Ridge AME Zion Church begins, Caldwell leads the group in the Lord’s Prayer. Then, as Caldwell plays the keyboard and gives directions at the same time, the choir goes over Sunday’s opening hymn before they dive into a long night’s work on the gospel tunes.

A banner hanging over the altar, celebrating the church’s 150-year history, says “For We Walk by Faith, Not by Sight.”

For 70 years, almost half of the church’s existence, Clarence Eugene “Gene” Caldwell has accompanied the choirs at Sandy Ridge on the piano. He started at age 12.

Since the late 1970s, he has been the church’s minister of music.

Sandy Ridge AME Zion is a bit unusual in that it has seven different choirs, and the 82-year-old Caldwell still directs four of them — the senior, missionary, gospel and men’s choirs.

Associate music director Janet Murdock, who doubles as the organist, conducts the other three choirs. Over her 28 years with the church, Murdock says she has seen how members of all the choirs respect Caldwell’s calm, inspirational manner.

And his instincts for the music.

“This is the first church I’ve been where I trusted the director(s) to make the music choices,” says the Rev. Clarence Shuford Jr., pastor of Sandy Ridge AME Zion.

Caldwell impresses Shuford with the way he practices and works individually with various soloists. “To me, he’s more skillful than a lot of younger musicians,” Shuford says.

The congregation has been using the entire month of November to celebrate Caldwell’s 70 years of music with the church. From 4 to 6 p.m. today, Sandy Ridge will hold a honorary banquet for him in the fellowship hall.

Two of the gospel quartets Caldwell performed with in the past, the Heavenly Voices and the Sumlin Brothers, will be the special guests. Close to a half century ago, Caldwell also played keyboards for a popular rock ‘n’ roll band called the El Roccos.

A hallway behind the sanctuary and leading to the church offices is filled with photos of Caldwell with his choirs through the decades.

In those pictures, he never seems to change.

“It became a part of me,” Caldwell says of his lifelong attachment to Sandy Ridge. “Every Sunday morning, I look forward to being here.”

Caldwell’s journey in music started with his mother, Willie P., who wanted her son to learn to play the piano. She began giving him lessons on an upright piano at their home off Millbridge Road when Gene was 6 years old.

“She sacrificed to get one,” Gene says. “She made sure I was going to be a musician.”

The experience didn’t start out well. Willie P. wanted him to practice for an hour daily before he played anything else. Caldwell failed to follow that edict one day, and his mother demanded he go outside to find her a switch — one with which to whip him.

She deemed the switch Gene brought back as too short, so she found one herself. From that day on, Willie P. laid the switch on top of the piano as a reminder of what would happen if Gene missed his practices.

Sarah T. Yokley would take over as his piano instructor. Yokley taught at Aggrey Memorial School and also played the piano at Sandy Ridge AME Zion.

When she left for a job in Troy, 12-year-old Caldwell stepped in as the new accompanist for the Sandy Ridge choirs under the direction of J.F. Caldwell (no relation).

“I guess I was too young to be nervous,” Gene says.

He went on to graduate in 1952 from Aggrey Memorial High, where he played basketball and baseball. He married his high school sweetheart, Louise (also known as Hattie), and the couple raised three daughters — Cathy, Carolyn and Cynthia.

Louise and Gene have been married 64 years.

You could say Gene Caldwell believes in loyalty. He worked in the sheet distribution department at Cannon Mills Plant No. 1 in Kannapolis for 47-and-a-half years, besides making money on the side as a house painter.

If he were scheduled to work a Sunday morning shift, his Cannon supervisors found ways to make sure he could attend his church duties at Sandy Ridge.

At one point, Caldwell says, he traveled to Livingstone College on Saturdays to enhance his musical skills. In addition, he learned to play the church organ.

Caldwell became involved with gospel groups and the seven-member El Roccos, who once played on an “American Bandstand” show in Charlotte. The group traveled over several states in the South, going as far west as Lexington, Ky.

Caldwell says they were a cover band, playing mostly at college fraternity parties. Members of the El Roccos, for which he was assistant manager, lived in Rowan, Cabarrus and Mecklenburg counties.

“They did a lot of rehearsals in our garage,” daughter Carolyn Hughes says.

Even with his heavy involvement in the rock band, Caldwell managed to fill his music role at the church. He took over as music director after the death of J.F. Caldwell.

You probably could count on two hands, over 70 years, the number of Sundays he has missed. Hughes says family vacations always were planned around or cut short by Gene’s church duties.

“We sacrificed a lot,” she adds.

The daughters also rebelled against the attempts by their grandmother, father and other teachers to give them piano lessons. This time, to their good fortune, no switches were resting on top of the piano.

“The bass tone in his voice was our spanking,” Hughes says.

Caldwell likes to keep moving. He bowls twice a week, in leagues in Kannapolis and Salisbury. He tends to two vegetable gardens and mows three lawns in his neighborhood.

Caldwell regularly attends his Optimist Club and Masonic Lodge meetings. At the church, besides being minister of music, he also serves as treasurer, is a church trustee and is a member of the pastor’s appreciation committee.

Sometimes, folks at Sandy Ridge call him “Mr. Eugene,” but he prefers “Gene.”

Caldwell has built a deserved reputation as a fashion plate, for the way he matches shirts, socks, ties, shoes and hats, to go along with some smart suits.

He owns an old-fashioned shoeshine box and still likes to polish his shoes.

Caldwell’s favorite sports teams today are the Carolina Panthers in football, the Charlotte Hornets in basketball and the Atlanta Braves in baseball.

Hughes says her father is humble and mild-tempered. He doesn’t like to complain, but truth be known, his hearing has diminished a bit.

“I didn’t realize I couldn’t hear good until they told me,” Caldwell says, chuckling as he looks around the room.

Early in the practice, as he introduces the gospel songs of thanks, Caldwell confesses to the choir that the pieces have a meaning for him beyond the holiday.

“They’re going to be my testimony,” he says.

They are going to be his thanks for all the things the church has done for him. But the songs have to be sung first, and Caldwell brings the choir back on task.

By Mark Wineka mark.wineka@salisburypost.com MOUNT ULLA — Carolina Farm Credit, which has an office in Salisbury at 2810 Statesville Blvd., has... read more