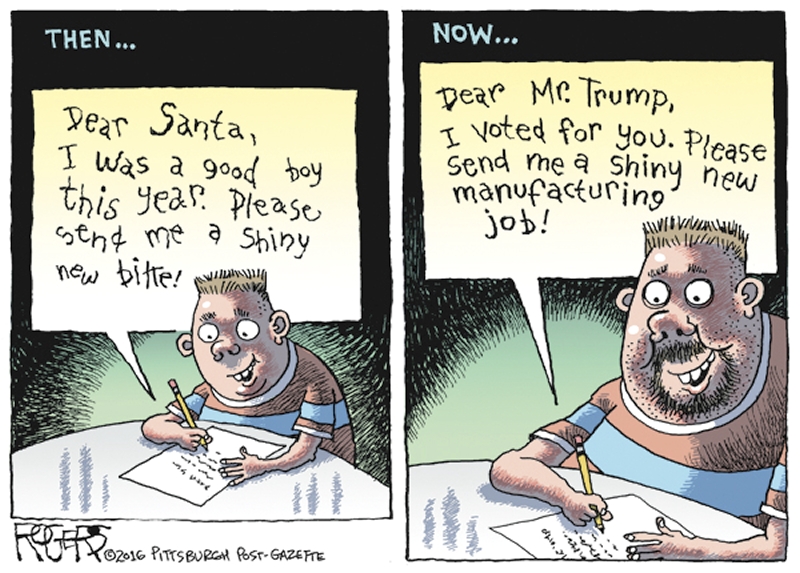 … Letter: We’re blessed to be citizens of the U.S.

I appreciate all the Trump supporters who are asking for unity after the election.

I do wonder where those calls for acceptance were after Obama was elected. Trump himself refused to accept Obama as his president, perpetuating the ridiculous assertion that Obama was not born in the U.S. for almost the entirety of his two terms.

Give those who find Trump’s rhetoric against immigrants, women and the disabled distasteful some time to see whether he will represent them. Trump is already backing down from much of what he said, but we’ll have to see how much he’s willing to compromise to bring the country together.

I will offer the same words of unity extended by Barack Hussein Obama in 2009:

We won, you lost. Get over it. Elections have consequences. We don’t expect to hear a lot of talking from you. We don’t mind if the other side rides along, but there’s just one thing: they gotta sit in back!

Now, what do you think of that? Did you really think we were just going to forget those words?

The election results were a huge disappointment for many Americans. Many of us are furious that a person such as Trump will become the leader of the free world.

While there is nothing that can be done to change that fact, there are ways to push back against the dark forces that brought him to this point in the first place.

I hope to do this in my part of the world by welcoming the stranger, engaging in civil dialog with those who disagree, articulating my protest in peaceful and proactive ways, and using a variety of sources to educate myself on important issues

“I think that the shock and the protests would have happened if the election swung the other way as well.” Oh, really?

When is the last time conservatives and traditionalists engaged in lawlessness, looting, rioting and violence? It’s past time for progressives and liberals to stop condoning those of their ilk who engage in such behavior.

I agree completely, Pat Bullard. We must stand together and fight hatred and bigotry. Trump and the Republicans started this with the lies and the conspiracy theories against Hillary, so it is up to us to stop it. This is not America as I know it nor want it to be.

Uncle Walt (Whitman), a compassionate poet, embraced the deplored, experienced the wrath of the conservative controlling class of racists, homophobes, sexists and those calling the unchurched heretics — and found God in his face, your face and every blade of grass.

He loved and forgave those that ruled him decadent, depraved and unholy. He was homosexual and vegetarian, yet he was sympathetic to the struggle of those that could not understand and found him deplorable.

I don’t think he would have voted for Trump ….

It’s time to get behind our newly elected president (just like we did with Obama), pray for him and this country and move on.

If Clinton would have won and Trump supporters were out in the streets tearing things up, they would probably be wiped off the face of the earth. Time to move forward.

I assume “just like we did with Obama” is a poor attempt at sarcasm.

Why are there no-knock warrants, anyway?

Imagine this: Law enforcement officers, with a search warrant, knock on a door and announce “Police Department! We have a search warrant! Open up!” This is followed a second later by bullets flying through the doorway. Or perhaps the officers force the door open, having given the suspect inside a chance to barricade himself somewhere and ambush the officers.

Obviously these are warrants that are not used on a regular basis and … they must be approved by a judge. It should go without saying that such decisions should not be made lightly. Indeed, there is lots of case law regarding “no-knock” vs. “knock and announce.” And while it’s a debatable use by police, the logic and legitimate need for that option is, to me, obvious.

The question, however, that should be researched instead of outright banning them, is if they are used appropriately, or if they are being over-used.

There certainly is a time and place to use “no-knock” warrants, but law enforcement must be able to demonstrate that such a warrant is needed in each case.

It’s too bad the LandTrust did not give the property to a coalition of interested groups from both sides of the river. The fort is part of a battlefield that spanned a larger area, and is a regional treasure.

There is no need to change the driver of a vehicle careening its passengers on a trip to complete disaster.

Harry Warren is a sensible moderate who would likely bring much to the table as House Speaker. It may also benefit Rowan County to have him in this position of leadership.

Catawba needs to change the lights along the highway. I come by there often and the yellow lights make it hard to see.

Needs to be better lighting. What is there isn’t bright enough.

Light pollution and its associated glare is the issue. There is ample light, but the glare is terrible. The lamp posts are beautiful but are terrible wastes of light. Not only do they waste light, they are a safety hazard as well.

Less light and lower power consumption would be fine if the proper lighting was used. Center for the Environment, how about taking up the issue of light pollution? It’s not just for lovers of the night sky.

I am truly sorry that a student was involved in an accident crossing U.S. 601. I will say this: everyone that crosses this highway on foot as well as drivers need to be extremely careful. The burden of safety falls on both parties. If the student had been paying attention, the accident would not have occurred. Also, saying the same thing to the driver. …

I pass through there often and I often observe students step off the curb into the street and never look both ways. Students, put your life in the hands of the driver and you lose every time.

I love my biker family. Some of the most wonderful people on the planet!

It was (as usual) a good show and a fun day. Beautiful weather was a plus, too.

I think field trips are excellent teaching tools. I would like to see more trips to factories, power plants, farms and construction sites. Young people need to learn how stuff is made and where stuff comes from.

Zoos are cool, but they can go there with their parents. Admittedly, few parents take their children to museums or concerts, and exposure to these places is important, but let’s include some nuts and bolts as well.

My sixth-grade class went to the Florida Times-Union to see how the daily newspaper is produced, and it was so fascinating I remember it 50 years later. Just an idea.

Thanks, Greg Alcorn … for such a well thought out project to address a severe problem in our area!

What a great effort. What impressed me also is that the organization is measuring whether this initiative has its intended impact.

Cecil Whitley is an outstanding, lawyer, person and family man. Also a great asset to Rowan County. He is a deserving attorney and amazing friend. Thank you for all you do in our community. You are truly a deserving young man.